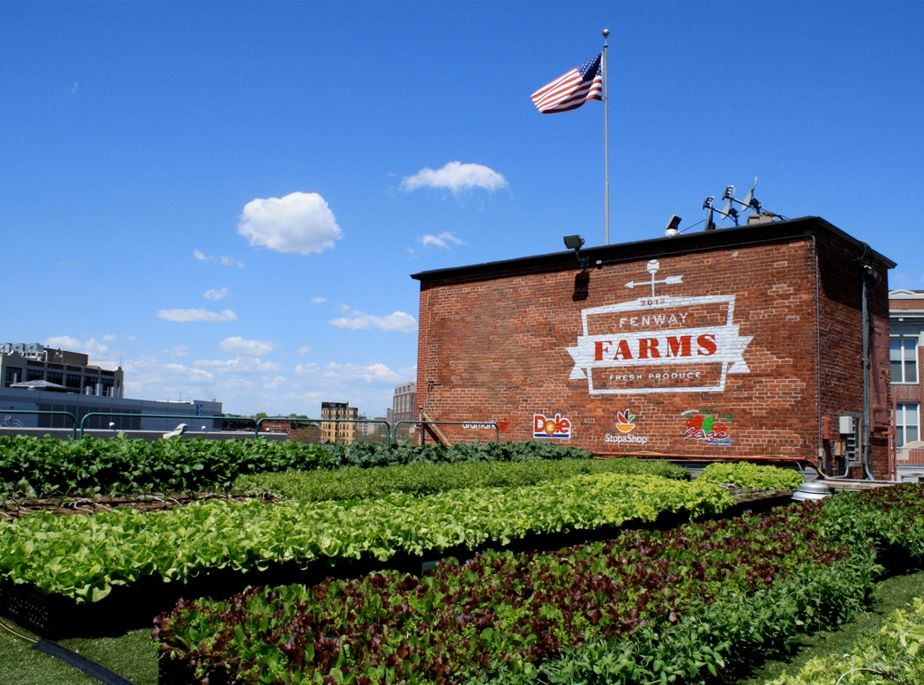 The oldest baseball stadium in the U.S., Fenway Park recently added 174 new seats, enhanced Wi-Fi, an interactive video wall for fans to take photos, activity space for children and two new 30′ high x 39.3′ wide LED ribbon boards. And, seeded atop the roof of the Red Sox front office and the Gate A entrance of Boston’s beloved Fenway Park, Fenway Farms is the new 7,000 sq. ft. rooftop garden designed to provide over 6,000 lbs of organic produce to ballpark attendees each year.

Since its completion for Opening Day on April 13, 2015, Fenway Farms has invigorated what was once an oddly shaped, unused roof into a thriving rooftop farm. The transformation was initially conceived by Linda Pizzuti, wife of Boston Red Sox owner John Henry, as part of an ongoing campaign by the Red Sox to exemplify and promote healthy and responsible ways of living. As such, the project was engineered with sustainability in mind on all levels, is highly visible to ballpark attendees, and has been included as a stop on the official Fenway Park tour.

Recover Green Roofs, LLC designed and built Fenway Farms using its Recover Aerated Media Module (RAMM) system, which features a series of 5-gallon non-woven fabric-lined crates made of 50% recycled plastic content. The system, though seemingly simple, ensures optimal drainage and aeration, as well as healthy root development and vibrant plant growth. Both design and materials allow for incredible flexibility as each planter unit can be moved in a modular fashion with ease. Additionally (and most critically), the crates can withstand wind uplift pressures even at dry weight, as each RAMM is secured to adjacent units.

Located long the 3rd base side of Fenway Park, the site is equipped with an automated Weathermatic Smartlink drip irrigation system to conserve water while supporting the farm’s rotating array of vegetables and herbs. The system allows for remote operation and monitoring using cloud-based software that reads local weather data and delivers water directly to the plants’ roots as needed. Crops are sown in locally sourced Vermont Compost Company soil, and Fenway EMC Chefs are incorporated into the process of selecting which plants will be grown each season. They then utilize the weekly harvests in salads and fresh side dishes prepared in the EMC Club kitchen, incorporating a range of arugula, snap peas, and rosemary in the spring season to eggplant and potatoes come the summer months.

“We’re hoping to teach fans and younger folks about the importance of sustainability and healthy living, and Fenway Farms is a tool for that education…we hope they take some of these tips and techniques home with them,” says Chris Knight, manager of facilities and planning at Fenway. “Being impactful with the platform we have here at Fenway is very powerful and unique…being able to influence fans and kids is pretty special,” (Fox25 News, 2015).

The largest organic rooftop garden in the Majors, Fenway Park is presented by Stop & Shop, Dole, Sage Fruit and Aramark, the park’s concessionaire.

Ballpark attendees seated in the EMC and State Street Pavilion levels have the opportunity to watch as Recover’s oft-collaborators at Green City Growers harvest Fenway Farms’ three-season yield. And for those tucked below in the ballpark’s lower levels, seated in the bleachers, or occupying the Green Monster – or for whomever else might wish to experience the farm firsthand – Fenway Farms is an official stop on the Fenway Park tour.

Located adjacent to Fenway Farms, The Vineyard Vines Club is a unique 5,600 sf of roof space with comfortable outdoor furniture and its Strega Deck contains 600 sf of growing space. Opened in 2016, the Fenway Farms-inspired event venue is rented out as part of ticket packages and for special events with access to audio/visual equipment including outdoor televisions and a sound system. The produce grown on the Strega Deck is donated to the Boston community via Green City Growers’ food rescue partner, Lovin’ Spoonfuls.