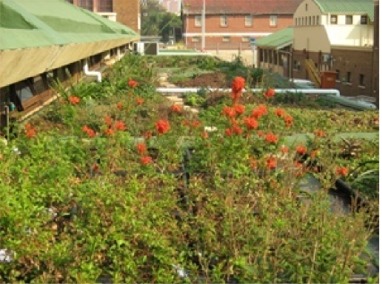 Read more details and all about the future research interests for the EThekwini Municipality Green Roof Pilot Project team in the October, 2009 Guest Feature on Greenroofs.com by Clive Greenstone here. For more info, visit Mike Hickman’s website where you can download the Green Roofs Pilot Project pamphlet here, and also see http://www.ecoman.co.za/green/green_docs/launch_greenroofs.htm, and http://www.ecoman.co.za/green/research.html. Contact Clive Greenstone at: +27 83 3986902 or [email protected] and Mike Hickman at: +27 82 0612593 or [email protected]

The green roof pilot project is part of eThekwini Municipality?s Municipal Climate Protection Programme. This programme was initiated in 2004 and focused initially on understanding the vulnerability of the city to the impacts of climate change. A strong emphasis has been placed on identifying climate change adaption projects that will improve the resilience of the city to future developmental, social and environmental challenges. Basically the green roof pilot project is a response to the higher temperatures and increase in the frequency and severity of floods and droughts that are expected as the result of climate change. From an urban environment perspective these changes will exacerbate the already high temperatures experienced as a result of the Urban Heat Island effect and the high levels of surface run-off and flooding that result from the hardening of permeable surfaces.

The pilot study is testing the following:

? Both the direct and modular methods of green roof construction
? Different growing media across a range of nutrient levels, textures, composition, depths, weights and drainage characteristics.
? A range of different plant species. The eThekwini Municipality Green Roof Pilot Project has used only indigenous plants (except for the food plants that will be tested) in support of the Municipality’s policy of protecting the city’s internationally significant biodiversity and came within a 50km radius of the building.
? Some containers are being used as ponds, to see which submerged aquatic and wetland plants will survive under rooftop conditions
? Different watering rates.Scientific analyses:
? To assess the temperature reduction that the green roof affords both the ambient atmosphere and the building itself (resulting in the reduction of the ?heat island effect? and the reduction of air conditioner use respectively.
? The quantity and quality of the surface run-off from the roofThe increase in biodiversity of the roof Before application of the Green Roof Design to the roof, a structural load capacity was estimated at 100kg/m2.

The existing waterproofing was checked and repaired where deemed necessary. Both the Modular and Direct Green Roof applications were installed. 5 areas were planted using modules/ containers and 3 areas using direct application with varied depths.

Different Applications:
Modules/Containers – Before installing the Modules the following was installed:
? A layer of Geotextile Bidum
? Then a layer of 1000 micron plastic was applied to protect the existing roof from wondering roots. (Roots are attracted to water and if not planned for accordingly could easily penetrate existing waterproofing and over a few decades cause potential damage to structures).

The containers are patented custom modules that are made of recyclable HDPE (High Density Polyethylene) and are UV resistant. They have built- in drainage systems and water reservoirs that aid in both storing water for plant usage as well as slowing down rainfall run off into existing infrastructure. They are made in varying depths of 75mm, 110mm and 200mm thus allowing for greater use of plant species adaptability. All the module weights were recorded in the Soil Aggregate Lab. Fully saturated planted modules weigh between 34 kg ? 92 kg/m2 depending on the depth of tray and plants used. This allows for more diversified application to the varied roof types in the city. The containers are raised 20mm of the roof to allow for free movement of both air which aids in cooling down the rooftop and building directly underneath as well as allowing for the unhindered movement of excess run- off water. The Modules are movable thus allowing for easy maintenance of the existing roof as well as changing of landscape design.

The team is also experimenting with some containers being used as ?ponds? to see which submerged aquatic and wetland edge plants will survive in damp seeps on exposed areas.

Direct Application – Before installing the direct application the following was installed:
? A layer of geotextile fabric,
? 1000 micron plastic and
? Then a drainage layer and
? An additional layer of geotextile was applied to create a layer to accept the soil and plants as well as to protect the existing roof from wondering roots. (Roots are attracted to water and if not planned for accordingly could easily penetrate existing waterproofing and over a few decades cause potential damage to structures).

The reason both the modular and direct application were installed using varying depths of growing media was in order to measure the following:

? The difference in growing medium weight and fertility for plant cultivation
? The ability of both techniques to minimise storm water flow and rainfall retention capacity. This will prove beneficial to both future policies around storm water management fees as well as mitigating against infrastructure damage with regards to storm water velocity and impervious surfaces in the built environment.
? Temperature probes and data loggers are installed in both applications to measure air temperature, rooftop temperature both under modules and direct applications. This is paramount to curbing the heat island phenomenon, as well as insulation correspondence regarding energy and buildings. (Results to date show differences of 25 degrees Centigrade between measurements were the Green Roofs have been installed).
? Biodiversity will be monitored what fauna will be attracted to Green Roofs, with +/- 100 plant species being used, already the results are showing which species are more suitable for Green Roof applications.
? The plants with the widest amplitude of survivability on our coastal belt are what the project team is determining with this experiment. Much of the inspiration is being found in the wild by observing which plant species are able to grow on extremely hot and dry granite and sandstone rock outcrops and cliffs (cremnophytes ? cliff dwellers) that have shallow humus rich ?soils?. Some shady cliffs can be seepages and will support water loving plants.