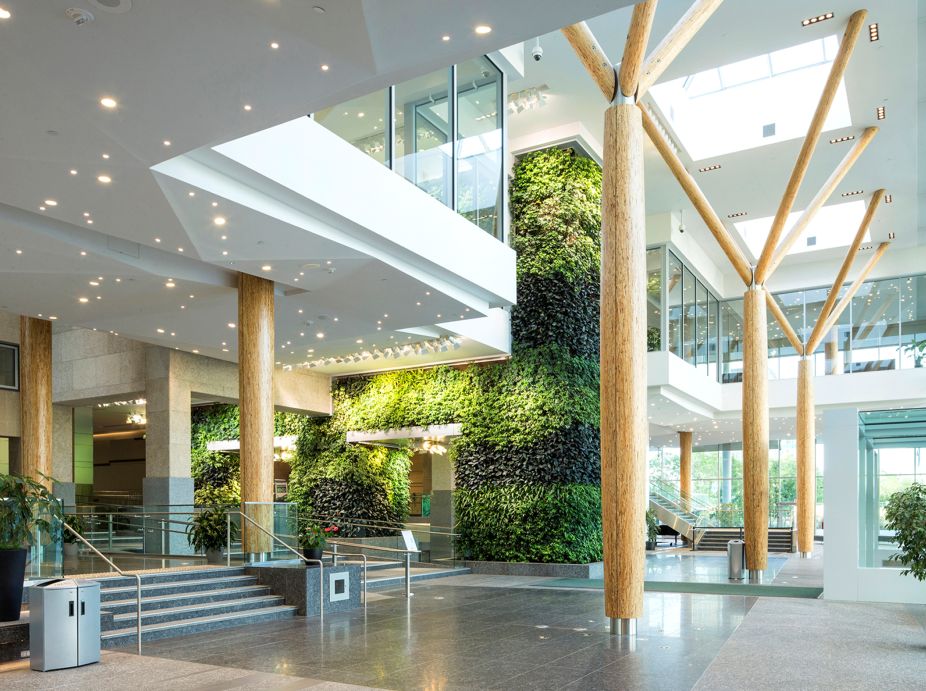 The Edmonton Federal Building is located at 9820 107 St NW Edmonton, AB, T5K 1E7; 780-427-7362; visit their website. Watch the 2:40 Edmonton Federal Building Living Wall Biofilter – Project of the Week 5/15/17 video from Greenroofs.com on the greenroofsTV channel on YouTube. Greenroofs.com Project of the Week 5/15/17 video photos courtesy of Kasian Architecture by Jim Dobie Photography via Nedlaw Living Walls, Terra Landscaping Ltd., and the “Federal Public Building during construction in 1958, RP164.2,” via the Provincial Archives of Alberta.

See the project profile from Nedlaw Living Walls. Read the December 15, 2016 Four Canadian projects win Awards of Excellence from Green Roofs for Healthy Cities by Canadian Architect. For more information about this project, contact Alan Darlington of Nedlaw Living Walls at Alan@Nedlaw.ca or www.nedlaw.ca and Christian Houle of Terra Landscaping at christian@terraland.com or www.terraland.com.

The Edmonton Federal Building is located on the northeast corner of the Alberta Legislature grounds, originally built by the Government of Canada to host its main federal offices for Western Canada. Based on a 1939 design and constructed in the late 1950s, this 11-story Manitoba Tyndal Stone structure is considered one of the city’s most significant modern buildings and one of the best surviving examples of art deco design in Canada.

Much more than an aesthetic feature, this living wall biofilter is a working element of the building’s mechanical system, an integral part of its HVAC system. The biofilter draws air through the wall of plants to the growth medium where biological agents consume pollutants. The clean air is returned to the building to improve indoor air quality and building performance.

“According to Dr. Alan Darlington (the technology’s founder), “This biofilter actively removes pollutants from the air, generating over 1,500 cfm (700 litres per second) of virtual fresh air. That’s enough ‘fresh’ air to supply two thirds of the needs of over 150 people. And this virtual fresh air is generated using up to 90 per cent less energy than conventional air treatment systems,” (Canadian Architect, 2016).

The Nedlaw Living Wall Biofilter is more than a collection of plants on a wall, it is a biological system of hydroponic plants that takes the air within a building, removes the pollutants and returns this cleansed air in the rooms. The beneficial microbes in the wall clean the air and break down the contaminants and nothing accumulates in the wall except CO2 and water.

The living wall and combined water feature provide a calm and serene moment in the busy public space. The vibrant layered and organic pattern of the plants makes the wall a work of art, and provides a foil for the otherwise angular and clean‐lined space.

A recent study predicts that in the Edmonton region, a biofilter can save $398 ‐ $726 per 100 litres of fresh air generated (by the biofilter). In addition to providing clean air at a fraction of the cost of a traditional HVAC system, the living wall biofilter at Edmonton Federal contributes to the humidity levels of the atrium space. As such the living wall system is adding innovation points to the LEED Gold certification goal.

2010–2015 Renewal Project
“After the building had stood vacant for 20 years, in 2010 the province began construction to restore this important architectural landmark. Construction was substantially completed at the end of November 2014. February 2015 saw the first of over 600 government and Legislature staff and MLAs to move into their new offices.

“For the most part, the east side of the building has retained its original character. A new 2-story glass pavilion on the west side reorients the building towards the Legislature grounds and provides a visitor-friendly public interface between the grounds and building.

“The rooftops of the main building, pavilion and service buildings all use green roof technology, offering a year-round display of native plants while providing benefits that include improved air quality, energy conservation and the moderation of urban heat island effect,” (Alberta Government, History of the Building).

The Edmonton Federal Building is open year-round to the public. Visitors can view the building’s historic architectural details, its outdoor plaza with fountains and gardens, and the main floor visitor centre and its living wall biofilter. Welcoming employees and guests, the living wall provides a soft, soothing, and secure feeling while entering into the gigantic entrance.