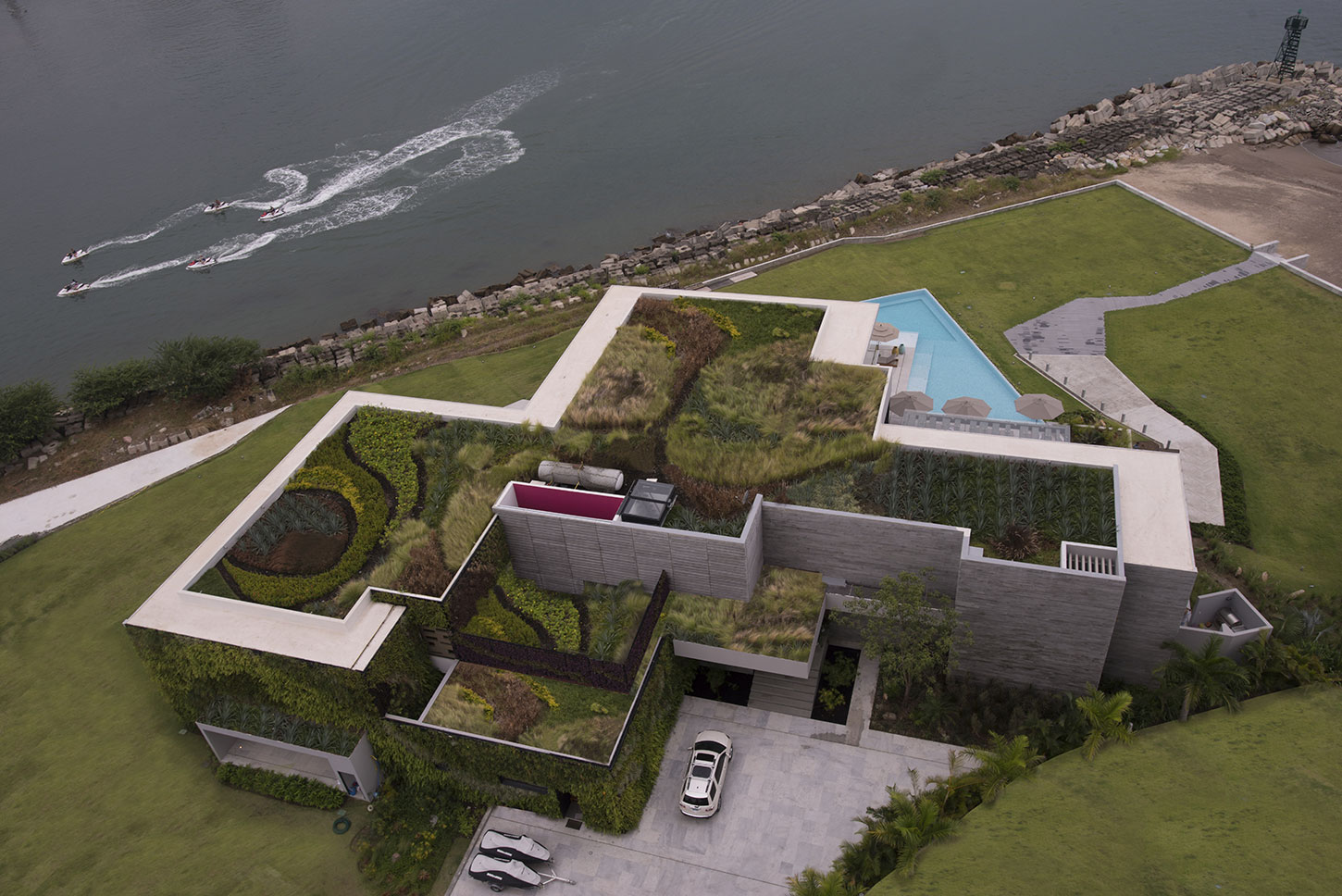 Puerto Vallarta is a resort city located on the Pacific Ocean’s Bahia de Banderas. The Casa Vallarta Greenroof & Greenwalls project included a 7,653 sqft greenroof and a multi-level 3,090 sqft greenwall oriented to the northeast, right in the beautiful City of Puerto Vallarta, Jalisco, Mexico. The first stage of the project which included the greenroof was started in April 2012 and was finished in July 2012.

The greenwall second stage was completed in October 2012. This was a single source provider project which included landscaping, irrigation, greenroof and greenwall system design and also the maintenance program.

Being right next to the ocean, the most logical design intention was to give the green roof and green walls some kind of movement. That led to curves speaking about the landscape tracing, and tall grasses speaking about the plant selection, due to the fact that they produce a wavy movement when there is wind. Another design intention was color; we wanted the green roof and green walls to be not just green but quite colorful, yet harmonic. Even though the entire house was intended to be contemplated from the distance from a 24-story tower next to the house, we also wanted to guarantee a unique experience when standing on the roof using plants that can lend different visual textures and also heights that could imprint some dynamism to the residence.

As part of the activities during the project and the warranties provided to the Client, we flooded the roof after the waterproofing membrane was installed to verify the quality of the material and the installation. This flood testing was certified by Public Notary no.5 in Puerto Vallarta.

Some facts about the whole greenroof-greenwall system:

– The Zona Verde MX team planted more than 19,619 plants among grasses, agaves and perennials over the roof and some short grasses and ferns in the greenwalls.

– Both stormwater and irrigated water are captured and guided to a storage storm water tank, then filtered through a sand system and returned to the irrigation system and so on; this water recycling system leads savings to the house owner.

– Air Conditioning equipment was reduced in number and in capacity due to the high insulation of the building which generates energy savings in this warm weather.

– Greenwall and greenroof have developed micro-habitats for local species like bees, spiders and dragonflies.

See the Casa Vallarta Greenwalls in the Greenroofs.com Projects Database.