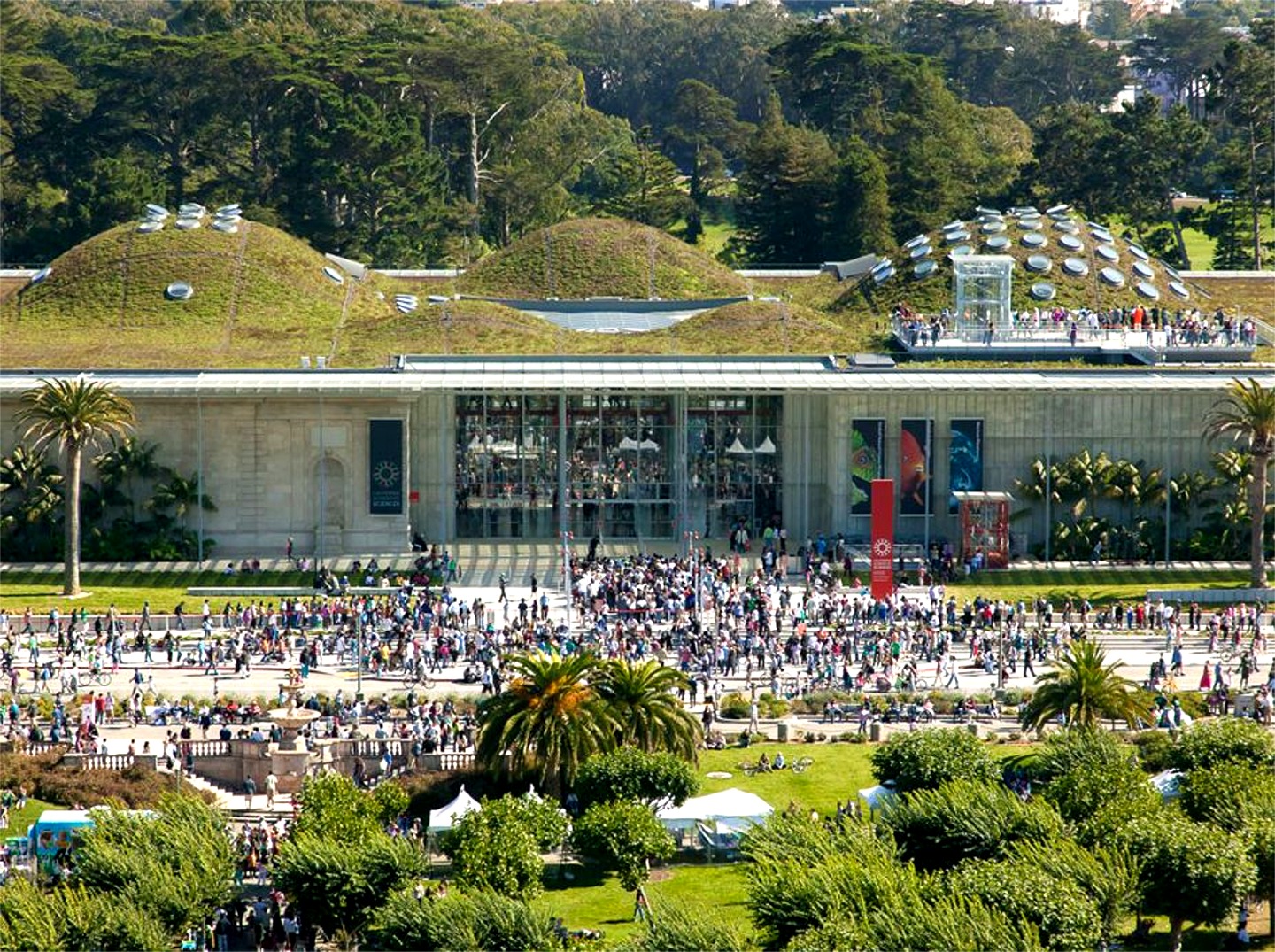 Visit the California Academy of Sciences website; 415.379.8000. Although the roof is generally inaccessible except for special tours, a viewing platform is available. Visit the Academy’s Green Building page and the Living Roof page.

Read about the following companies in The Greenroof & Greenwall Directory: American Hydrotech; Tremco; and Intrinsic Landscaping.

See the project profiles from Renzo Piano Workshop; Rana Creek; American Hydrotech; and the landscape architect, SWA Group, who graciously provided many of the photos here.

Situated in the heart of one of the country’s largest urban parks, the world’s first and largest double LEED Platinum museum, the California Academy of Sciences (CAS), stands proudly with exhibition space, education, conservation and research beneath one roof in San Francisco’s Golden Gate Park. Its 2.5-acre undulating greenroof sits 35 feet in the air planted with a variety of over 50 native wildflowers and other species. The San Francisco-based Bernard Osher Foundation made a $20 million donation to the new Academy project in support of the living roof and the four-story Osher Rainforest exhibit. The $429-million California Academy of Sciences broke ground in September, 2005 and the Opening Day was September 27, 2008.

Designed by Renzo Piano Building Workshop (RPBW) along with a slew of other professionals, a single building beneath the new 2.5-acre living roof measures 410,000 sf and houses the academy components that once stretched across 12 structures. The key elements are the new iterations of the Morrison Planetarium, Kimball Natural History Museum and Steinhart Aquarium. Also included are eight scientific research departments, an indoor rainforest, and a coral reef exhibit with some 4,000 fish in a 212,000-gallon tank that the academy says is the deepest living display of its kind.

Rana Creek Living Architecture worked with Renzo Piano Building Workshop, Chong and Partners Architecture, SWA Group, ARUP Engineering, and the Academy to design the living roof with seven dramatic hills and four steeply sloped domes, replicating the surrounding rolling hills. Because the hills are as steep as 60 degrees at some points, extensive testing was done to ensure a successful planting palette. The mounds on the roof are dotted with circular skylights fitted with heat sensors, and the skylights open to further cool the building when a certain temperature is reached. The two main domes cover the planetarium and rainforest exhibitions. An open-air observation terrace enables visitors to get a close-up look at the roof’s lush canopy of plants.

The new building has maintained the same position and orientation as the original; all the functions are positioned around a central courtyard which acts as entrance lobby and the connection point to the collections. Covered by a concave glass canopy with a reticular structure reminiscent of a spider’s web, the central courtyard is open at the center.

Surrounding the Living Roof is a large glass canopy with a decorative band of 60,000 photovoltaic cells contained between two glass panels. These solar panels generate approximately 213,000 kilowatt-hours of energy per year and provide up to 10% of the California Academy of Sciences’ electricity need. The use of solar power is expected to prevent the release of 405,000 pounds of greenhouse gas emission into the air. The greenroof keeps interior temperatures about 10° F cooler and reduces low frequency noise by 40 dB.

The biodegradable modular greenroof system, BioTray™, was developed specifically for this project by lead living roof designer Paul Kephart of Rana Creek along with Kurt Horvath of Intrinsic Landscaping (BioTray™ was later purchased by Tremco). “They used 50,000 porous, biodegradable trays made from tree sap and coconut husks as containers for the vegetation. These trays line the rooftop like tile, yet enable the roots to grow and interlock, binding the trays together like patchwork,” (CAS website).

Two of the domes have almost 60 degree slopes. Rana Creek supplied approximately 50,000 17″ x 17″ biodegradable modular Bio Trays, made from coir from the Philippines. An underlying grid of gabion channels provides water drainage and support for the compressed coconut hull planting trays. Initially the roof was planted with nine plant species native to the northern California coast, and approximately 1.7 million plants originally blanketed the living roof. The three-year research period during which Rana Creek Living Architecture designed, built and monitored a series of living roof mock ups informed this diverse assemblage of indigenous plants, as well as the growing medium retention and drainage techniques ultimately chosen for the project. The California Academy of Sciences is unique amongst natural history museums in its dedication to combining research and education under one roof.

Covered by six inches of growing medium, “the roof provides excellent insulation, keeping interior temperatures about 10 degrees cooler than a standard roof and reducing low frequency noise by 40 decibels. It also decreases the urban heat island effect, staying about 40 degrees cooler than a standard roof. Moreover, it absorbs about 98% of all storm water, preventing up to 3.6 million gallons of runoff from carrying pollutants into the ecosystem each year (California Academy of Sciences Press Release, 2007).

Accessed via elevator, the California Academy of Sciences’ half a million visitors per year can visit the rooftop on a secure 3,500 sf railed-in observation platform.  The area has interpretive signage and offers expansive views of the rolling greenroofed hills, but the actual greenroof portion is not publicly accessible.

The California Academy of Sciences is a masterpiece of sustainable architecture, blending seamlessly into its setting while employing a wide variety of innovative features and operations to minimize its footprint. The CAS has received many awards including the 2009 Honor Award in the ASLA Professional Awards in the General Design Category; 2008 Green Roofs for Healthy Cities Award of Excellence; and in 2005 was selected as the North American winner of the silver Holcim Award for Sustainable Construction in recognition of its innovative “green” design of their new facility.