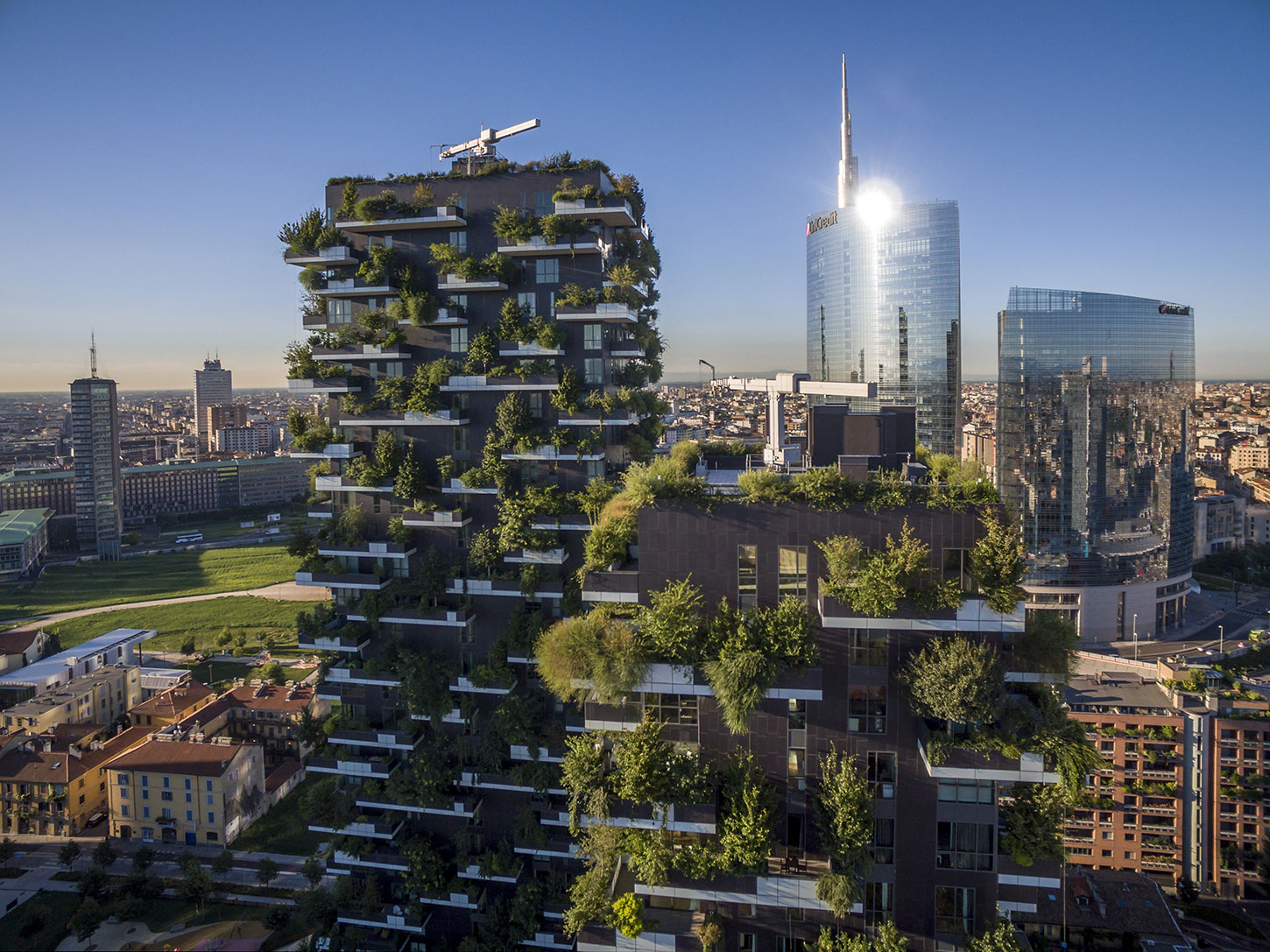 Visit the Porta Nuova website to learn about the Bosco Verticale Milan.

Designed by Boeri Studio, the Vertical Forest is a model for a sustainable residential building, a project for metropolitan reforestation contributing to the regeneration of the environment and urban biodiversity without the implication of expanding the city upon the territory. It is a model of vertical densification of nature within the city that operates in relation to policies for reforestation and naturalization of large urban and metropolitan borders.

Developed by Hines, the first example of the Vertical Forest consisting of two residential towers of 110 and 76 m height was realized in the centre of Milan, on the edge of the Isola neighborhood, hosting 800 trees (each measuring 3, 6 or 9 meters), 4,500 shrubs, and 15,000 plants from a wide range of shrubs and floral plants distributed according to the sun exposure of the facade. All of the plant species were carefully selected by agronomists Laura Gatti and Emanuela Borio.

On flat land, each Vertical Forest equals, in amount of trees, an area of 20,000 square meters of forest. In terms of urban densification it is the equivalent of an area of a single family dwelling of nearly 75,000 sq.m. The vegetal system of the Vertical Forest contributes to the construction of a microclimate, produces humidity, absorbs CO2 and dust particles and produces oxygen.

Due to towering heights, terrace cantilevering, and heavy plantings, Arup performed geotechnical and structural engineering studies, including wind tunnel testing. With the buildings constructed completely in concrete, the columns are made of reinforced concrete and the floors are post-tensioned reinforced concrete.

The planting containers of the Bosco Verticale’s 3.3-meter-deep cantilevered terraces are protected with a bituminous waterproofing membrane, and are preserved by protective sheeting against root penetration and each has an automatic irrigation system. Tree container dimensions: 1.10 m deep x 1.10 m wide; shrub and bush dimensions: a minimum of 0.5 m depth and 0.5 m width. The main inorganic material of the growing media is volcanic lapilli, selected with different grain sizes and mixed with green compost and topsoil. Read the in-depth 2015 Council on Tall Buildings and Urban Habitat (CTBUH) case study below for more specifics.

The choice of species and their distribution according to the orientation and height of facades is the result of three years of studies carried out alongside a group of botanists and ethologists, including Laura Gatti. The plants which are used on the building were pre-cultivated in a nursery in order for them to become accustomed to similar conditions to those which they will find on the balconies. In addition to evergreen species, deciduous specimens include beeches, yellow acacias, oaks, maples, ash trees, ferns and ivy which are planted on the four different facades of the two skyscrapers (Gaggenau, 2015).

The two Bosco Verticale towers reside in the Residenze Porta Nuova on Via De Castillia and Via Confalonieri, respectively. They overlook the large public park of “I Giardini di Porta Nuova,” also benefiting from the Giardino De Castillia, a green park area for the neighborhood residents which, with its 8,000 square meters, becomes an ideal place to walk, play, and relax. Porta Nuova is a single pedestrian area of over 160,000 square meters, crossed by 2 km of footpaths and 5 km of cycle paths.

Number of inhabitants planned in both towers: 480
Number of bird species with nests in the towers: 20

Maintenance of vegetation
Number of centralised monitoring stations: 2
280 water control systems (one for each terrace)
Yearly maintenance check (pruning): 6 in the first 2 years, 4 since 2017

3 checks from the inside of the apartments

Construction on the Bosco Vertical Milan started in 2009 and was completed in 2014.

“The creation of a number of vertical forests in the city will be able to create a network of environmental corridors which will give life to the main parks in the city, bringing the green space of avenues and gardens and connecting various spaces of spontaneous vegetation growth.” – Studio Boeri, 2014

The lushly planted Bosco Verticale its and ever-evolving seasonal facades offer its residents a cool, colorful, and sustainable lifestyle and contribute dramatically to the Milan cityscape. Conceived as a prototype of the skyscrapers of the future, Stefano Boeri Architetti continues with future designs for Vertical Forests in the Netherlands, China, Albania, and France, with plans for continued development.