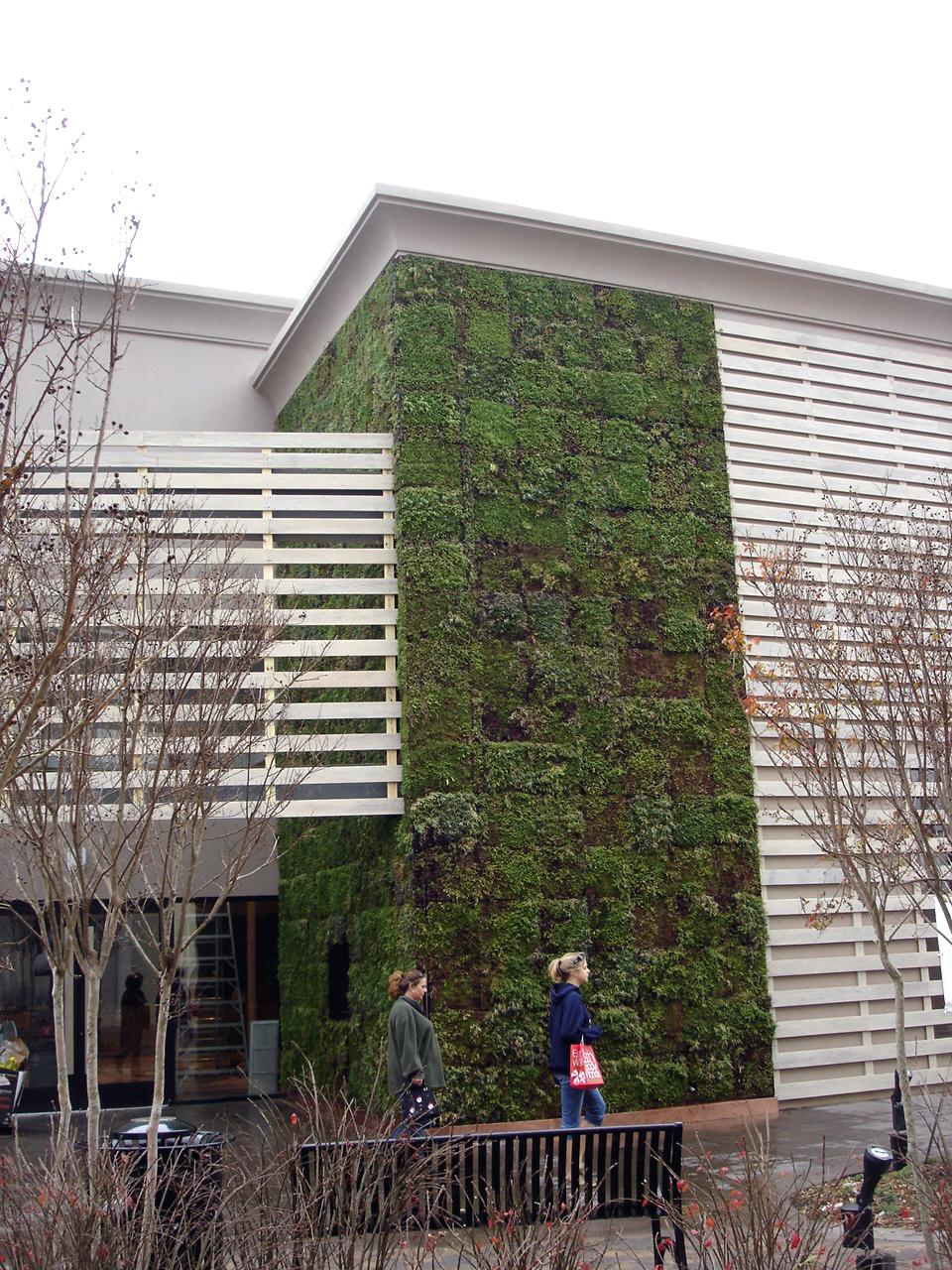 A lush, green vertical landscape was envisioned as a new kind of facade for the Anthropologie presence in Huntsville Alabama. The walls are boarded with white wash slats of wood screens and were conceived as an intuitive response to the rich landscape of the South. As the green wall changes through the seasons the plant life will bring a natural textural element into the anonymity of the typical suburban lifestyle center. Ultimately the walls help to support an awareness of the environment and establish a more modern way of looking at nature (Robin Elmslie Osler, Jan. 2008).

The Green Living Green wall system was developed by Green Living Technologies (NY, USA). The system modules are a 2′ x 2′ x 3″ depth as a standard, custom depths, curvatures and custom configurations are also available. The panels interlock at the bottom allowing for a seamless pattern over a single growing season. Each cell of the Green Living green wall module had free draining “slots” in both the horizontal and vertical walls that also allow for unlimited root migration preventing root bound plants. In addition these “slots” allow for free drainage resulting in vigorous plant health preventing root rot and encouraging a strong root system. The panels were pre-vegetated to maturity on a farm prior to delivery.

Due to the extreme temperatures of 110 degrees (43 C) the Green wall features a 2 zone system with top down gravity feed irrigation using an 8mm drip line per row, 6 inches on center emitter spacing at .5 gal per hour discharge. The entire wall is irrigated in less then 10 minutes with minimal water use. A wireless moisture sensor is present preventing the irrigation form being activated when sufficient water is present. At the bottom of the green wall a catch basin, manufactured from recycled copper, retains any excess water to be used in the ground level landscaping adjacent to the wall.

Based on previous green roof data with the similar 3 inches of growing media depth, hypothetically existing green roof data suggests that the use of this soil based green wall has the same ability, as an extensive green roof, to shade the facade and absorb UV rays preventing potential heat loss and heat gain while maintaining the interior ambient temperature inside the immediate retail space. In addition since the green wall maintains a moisture level for the plant material it is also hypothesized the additional cooling effects by the moisture will also reduce the heating effect even further. Based on in house R&D and short term trials we found that the 3″ media depth installed with 100% vegetation (Sedum) coverage, in a vertical plane, exactly to the spec on the existing project, GLT has found the green wall installed for this project can retain an average of .3 gallon water per square foot (12 liters per square meter) leading us to believe that further testing will display a positive correlation to the use of soil based green walls as an additional tool to capture, slow down and filter storm water runoff.

Based on 1800 square feet (167 square meters) the Green Wall can potentially slow down the flow rate of a storm event and in addition retain an average of 540 gallons (2000 +/- liters) of water.