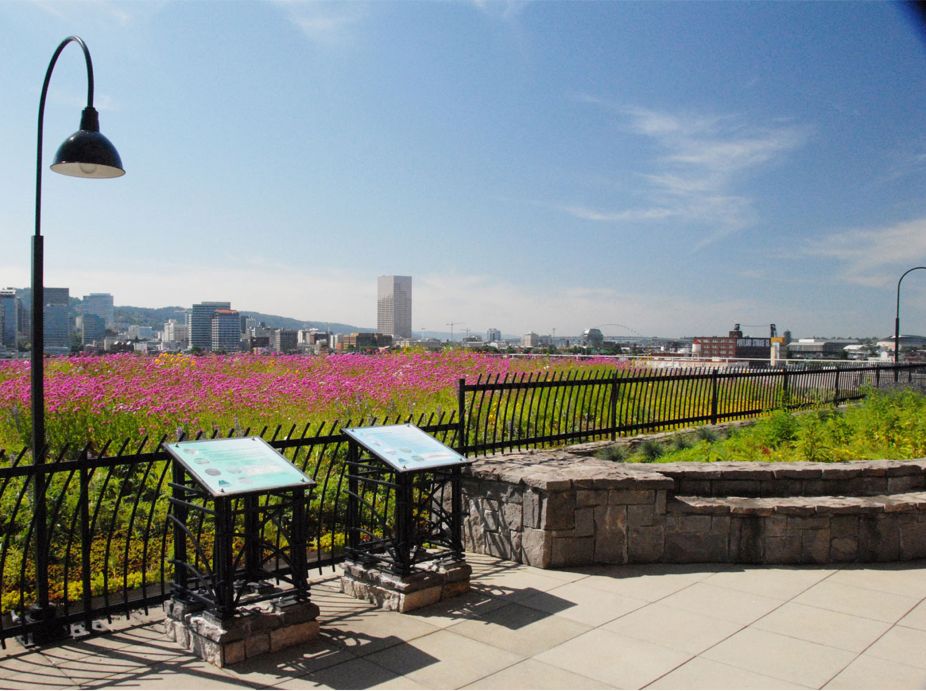 Read the June 10, 2014 Multnomah County Portland OR Hosted GLTi Living Wall Weekend by George Irwin at Green Living Technologies; August 16, 2009 The coolest roofs in the world by Rick Attig in The Oregonian; April 22, 2004 Multnomah Building Green Roof receives People’s Choice award from ASLA in The Daily Journal of Commerce; and the November/December 2003 Sky Gardens ~ Travels in Landscape Architecture by Linda S. Velazquez on Greenroofs.com. The Multnomah County Multnomah Building was highlighted in the 2009 Greenroofs of the World Calendar from Greenroofs.com in the month of November.

Learn about Tremco, Incorporated in The Greenroof & Greenwall Directory.

Upon exiting the 5th floor elevator, the green roof panorama of wildflowers, grasses and sedums is immediately visible from the vast expanse of picture windows. Resembling an open meadow, the flowering plants were selected to attract birds and butterflies amidst the industrial and commercial neighborhood. The planted area is gently mounded in the center due to the roofing structure, and the slightly western aspect adds visual interest. Descriptive interpretive signs allow for easy access to green roof information.

Three distinct opportunities for education were addressed as part of the process in the development of the Multnomah Building Green Roof: 1) public accessibility; 2) interpretive activities; and 3) free sharing of data between professionals. The specifics of these aspects can form a basic model for incorporating education into future green roof projects of any scale.

Structural roof support and a 5-ply roofing system previously existed consisting of a built-up roof (3-ply polyester and 2-ply fiberglass membrane) set in hot asphalt atop three inches of polyisocyanurate and fiberboard insulation. A ¼ inch protection board was laid on top of the existing roof which provided roof protection during construction as well as additional root barrier protection. A hollow core ½ inch drainage mat with root barrier from Tremco was installed with a top layer of fabric that allows water to pass through while restricting the movement of soil. See all components from the City of Portland’s Bureau of Environmental Services Department Multnomah County Green Roof case study.

The Multnomah Building Green Roof received the 2004 People’s Choice award from the Oregon Chapter of the ASLA.

On November 10, 2005 the Multnomah County Multnomah Building was renamed the Amy Joslin Memorial Eco-Roof in honor of the late Multnomah County Sustainability Manager. During her 11 year tenure, she gained respect and county-wide awareness due to her commitment to sustainability and her leadership in the County energy conservation program, promoting the LEED standard for the design of new buildings, the Green Team – an ongoing band of dedicated staff from across the County working toward decreasing our impact upon the environment – and the development of the green roof at the Multnomah County headquarters building.

“Despite the complicated, technical and laborious project before her, Amy excelled above and beyond her duties. The result: a beautiful and educational eco roof which exceeded all expectations,” (Multnomah County RESOLUTION NO. 05-193 Naming the Multnomah Building Green Roof the Amy Joslin Eco Roof.

A metal fence prevents public access to the roof. Since the major meadow portion of the green roof is not accessible, the adjacent fifth floor rooftop plaza serves as the demonstration area. The overhead view, below left, shows the flow of the accessible serpentine raised bed hardscape which was initially meant to display representative project plant material. It also acts as a seating wall for visitors.

For the first seven years, the six inches of lightweight growing mix in the raised bed held succulents, perennials, annuals and grasses. In 2009 Multnomah County and the City of Portland partnered to plant organic vegetable gardens to recognize the growing community interest in local food systems and to inspire residents to plant their own edible gardens. Along with others, they created the “Hope Garden” demonstration project in Multnomah Building’s accessible serpentine raised bed and planted an organic vegetable garden.

“The 200 sf garden is about half the size of a typical community garden plot, so gave an indication of what level of productivity could be expected through small-scale gardening. Using dense planting and vertical trelllises, the Hope Garden produced over 750 pounds of vegetables that were donated to the Oregon Food Bank through their Plant a Row program – going to local program Loaves & Fishes, which aims to connect homeless and poor families with surplus fresh vegetables from gardens,” (Jason King, TERRA.fluxus, 2010).

In June 2014 a small demonstration edible living wall was installed by Green Living Technologies (GLTi) on the fifth floor wall of the Multnomah Building, facing the Amy Joslin Memorial Eco Roof. Planted with 144 plants, a variety of herbs and vegetables including green peppers and tomatoes among others, the green wall and the rooftop Hope Garden grow donations for the Oregon Food Bank. A GLTi Plug and Play green wall was also originally installed as part of the training exercise and has been moved between several buildings owned by Multnomah County to demonstrate the benefits of interior living walls. This freestanding version is 7′ tall x 24″ wide and contains 90 air purifying plants.

Manufactured from recycled stainless steel, the patented Green Living Wall (GLTi) is 4′ wide x 6′ high and only 4″ deep. The system is designed with apertures in the horizontal and vertical cell construction to allow for root migration and water flow. The wall is irrigated with a drip line and no synthetic fertilizer is used. The media is a proprietary blend providing enough nutrients to bring the plants to maturity without additional fertilizer input. The GLTi Green Living Wall Panels can be reused again, year in and year out.

The roof also serves as a laboratory for green roof development with experiments that have been conducted by various agencies, including Portland State University and the City of Portland’s Bureau of Environmental Services. Water entering drains for a portion of the roof have been monitored for a number of factors to quantify the green roof benefits and increase public knowledge.

In addition to these sustainability efforts, the building is certified Gold in the City of Portland’s Sustainability at Work program which includes:

– The building has received an Energy Star rating of 91.
– Fuel efficient Fleet Vehicles include four electric Nissan Leafs to cut down on emissions.
– The building’s Green Team and network of Sustainability Liaisons coordinate internal sustainability efforts across departments and buildings.
– The building offers indoor bike parking, showers, and locker rooms.

The project received funding from Environmental Services Stormwater ($50,000) and DEQ (75,600); the cost for the green roof was $17/ ft2 (City of Portland). Multnomah County says the green roof “evaporates about 25% of the building’s rainwater runoff and reduces the air conditioning load between 5-10%,” (Multnomah County). The Amy Joslin Memorial Eco Roof stands as a Portland icon as one of the first municipal green roofs, a symbol of remembrance for a beloved county leader, and a source of pride for Multnomah County’s commitment to sustainability.