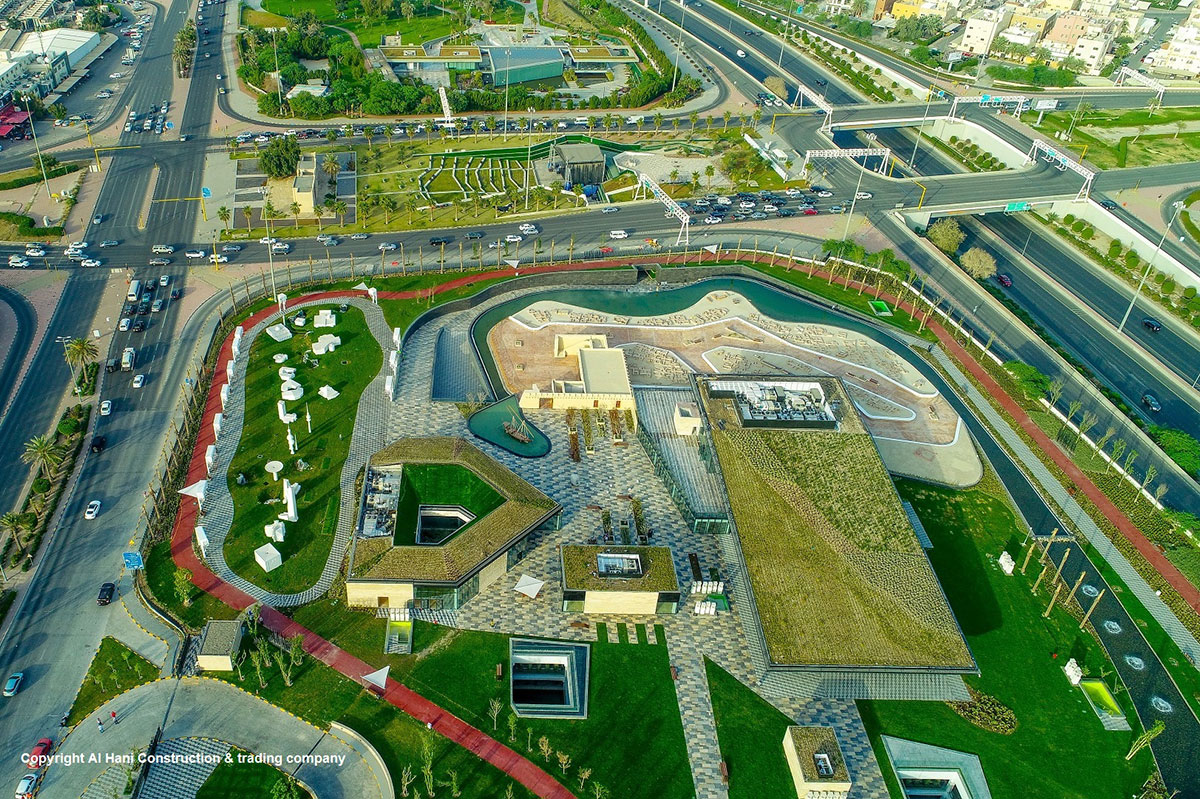 Located on the country’s oldest and most historical ring road on the periphery of Kuwait City, Al Shaheed Park is Kuwait’s historical, environmental and cultural platform with cutting-edge architecture and artwork. Providing the public with high quality programs, events and spaces, part of its mission is to spread awareness and to educate the public on the importance of the country’s land, history and environment, in addition to the encouragement of international and regional exchange of arts.

The nearly 20 hectare Al Shaheed Park was conceived to narrate the story of a land, its history, and culture; the Green Belt was renamed Al Shaheed Park in memory of its martyrs. Developed by Al Diwan Al Amiri (a civic organization) and managed by Loyac (Lothan Youth Achievement Center), the park was constructed in four successive stages, from 2013-2017.

“Building a nation’s civilization is an ongoing process that never stops. It entails working on all aspects of a nation. After all, generations are like waves, taking over from one another—just like the sea, which wouldn’t be a sea if it weren’t for one wave taking over from where another left off.” ~ His Highness Sheikh Sabah Al-Ahmad Al-Jaber Al-Sabah

The public park is one of most significant green infrastructure projects in Kuwait with 200,000 m2 of greenery in total, and is the largest urban park in the country overall.

Al Shaheed Park is also one of the largest overstructure greenroofs in the world at about 75,000 m2. In addition, several greenroofed buildings sit atop the park including museums, the Visitor Center, and restaurants.

“During the first construction phase (2013-2015) almost all the buildings, including 17.000 m2 ceiling of the underground car park were fitted with roof greening. In total this is 35.000 m2 of Green Roofs. In 2017 the second expansion “Phase II” was opened for the public, thus doubling the total Green Roof area of the park,” (Al Shaheed Park, 2018).

With a vision to promote and educate the visitors about the importance of environmental sustainability, the Master Plan combines cultural, social, and environmental aspects in a very green environment. And it is safe and free of noise pollution as it’s been cleverly designed with the use of small hills all around the park to block off street noise.

Designed by Sara Machado + Ricardo Camacho and The Associated Engineering Partnership – TAEP – (with numerous consultants), the expansive site is beautifully landscaped and holds monuments, botanical gardens, and two museums – Thekra and The Habitat – a modern congress center, the Visitor Center with cafes and restaurants, the Amphitheater, the Bird Aviary, the Green Belt Lake (used for park irrigation), walkways, jogging and biking lane, a musical fountain as well as a mosque.

“The Lead local Consultant TAEP teamed up with the international consultant Ricardo Camacho on the competition-winning redesign. The project included the integration of several buildings in the existing garden and the selection of a native vegetation scheme that could respond to water consumption restrictions, the harsh environmental conditions and urban maintenance practices. The project was developed and implemented in a record time of 22 months.” ~ DIVISARE

The “Celebration Gate” is the main entrance gate of Al Shaheed Park. Its distinctive architecture boasts different elements including a gabion wall and green wall, one of several living walls located within the park. In November 2014 GSky designed and installed five exterior greenwalls totaling 1,402 sf throughout the park at the Celebration Gate, ticket and lobby space, and two terraces. An approximate 1,000 sf interior greenwall hangs within the Habitat Museum.

One of the five remaining gates from the demolished Kuwait Wall, the Old Al Shaab Gate was salvaged and set within the park. As a result of the reconversion of Al Shaheed Park, visitors can now walk up to the gate and get a closer view of this historic landmark. A miniature of the old Kuwait city is another historical recreation and popular visitor attraction.

The park consists of two main monuments: The Martyr Monument is a seven meter high glass sculpture built to honor the martyrs of Kuwait. The building of this monument was actually the first step taken in the reconversion plan of the park.

Thekra is a memorial museum that narrates the history and battles of Kuwait, including the Gulf War, where visitors are provided with a wealth of knowledge. Part of Thekra’s mission is to preserve the country’s historical and cultural values by collaborating with the public. Dedicated columns of citizen videos share past personal experiences with the aim of passing them on to the next generation. Its cafeteria overlooks the memorial garden and pools, and offers a research room for the collection of historical data; two men and female prayer rooms are also located within the museum office building.

The Habitat is an environmental museum that explores Kuwait’s habitats and aims to promote awareness and educate the public on the different ecosystems and the effects of pollution in the land. Through interactive learning stations visitors can learn about Kuwait’s environment including native plants and bird migration in a fun and interactive way. The vegetation in this area was designed to be a space for planting different native plants and see how they react in an urban environment – including on its small greenroof.

The Museums were designed by the Ralph Appelbaum Associates planning and design company and are integrated with a minimalist aesthetic.

“The permanent exhibitions of these “sister museums” span a combined 37,000 square feet, offering visitors incredibly immersive experiences that are rich with digital interaction. The unique architecture is hidden underground beneath a green cover of native plants, specifically designed for a desert environment.” ~ Brice McGowen

The complete greening of all of the underground car park roofs created a continuous parkland. The hot and arid climate posed a particular challenge and the ZinCo system build-up “Landscaped Underground Garage” was chosen. In addition, all building roofs have been greened with different ZinCo systems.

“For the vegetation layer in the Al Shaheed Park, native plants which are suited to the sub-tropical climate were used exclusively. Mention should be made of the many date trees and other types of tree such as the acacia arabica, the lemon tree and the Prosopis chilensis. A total of 1500 trees were planted during Phase II. The selected shrubs are also ideal for the arid location, for example, the desert Rose, oleander, agave and the Euphorbia tirucalli, as are the herbs such as Rosemary and ground cover such as Portolacaria and Carissa. The Saint Augustine, among other grasses, is typical for sub-tropical climates. In total, 25 different types of plants were used which, regardless of the specific suitability for arid locations, are reliably irrigated by means of an automated irrigation system. Their response to that is magnificent growth.” ~ ZinCo

In collaboration with their ZinCo partners, Green Studios designed the roof garden buildup as well as engineered and produced the green walls with state of the art sensors and smart controllers for monitoring the humidity, temperature, and electro conductivity.

“The difficulty of engineering those hydroponic vertical systems is the harsh hot, dry, and windy climate in Kuwait that can reach temperatures of 130F, which made us adapt our skin by increasing its thickness by 20% in order to increase water retention and avoid plant damage.” ~ Green Studios

The Underground Parking at Al Shaheed Park is a two floor car park with a total of 900 spots and beautiful oasis fountains. There are two main car park entrances to the park – a Blue zone (leading to the Constitution Monument) and a Green Zone (leading to the Habitat Museum) with elevators and escalators and eight staircase entrances. An interesting element in the underground parking is the presence of underground gardens, making it a unique car park in Kuwait.

Opened in April, 2017 Al Shaheed Park Phase 2’s central theme is a constructed river that connects the different areas and is highlighted by various types of engaging water features.

Al Shaheed Park grants the public outdoor and indoor spaces which can be utilized for various cultural events. Management plans a quarterly calendar of events and activities that engage all members of the community and are free of charge. Activities at Al Shaheed Park include music festivals, poetry readings, fitness challenges, jogging and yoga clubs, and educational workshops for both children and adults such as Urban Beekeeping, among many more.

The park also features beautiful outdoor sculptures created by local artists including the Map Abstraction Sculpture by Ahmad Al Obeid. Equipped with movable benches that can be used for various events and activities, the Circle of Peace is the biggest open grass area where most of the larger events take place. In between the cafeteria building, the multipurpose hall, and the entrance to old Kuwait is a beautiful plaza hosting The Marble game, representing one of Kuwait’s traditional kid’s game with larger than life sculptures.

Visitors are offered various guided tours led by Al Shaheed Park Tour Guides. A group of young Kuwaiti people whose purpose is to prove that the future can be directed, they believe in using their full potential and skills to help Kuwait regain its cultural, touristic, and educational significance through working with LOYAC in managing Al Shaheed Park.

The beautiful, sensitive, and multifaceted Al Shaheed Park is a public garden oasis in a desert city honoring its past and promoting sustainable cultural and environmental design for both visitors and citizens of Kuwait.

Construction of Al Shaheed Park Phase 3 by Al-Hani Construction & Trading Co. was paused in 2019 due to COVID-19 but restarted in early September, 2020. The major design phase was completed on September 15, 2020.