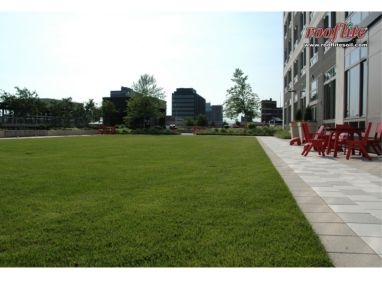 Completed in 2010, 360 State Street is a nationally recognized and award winning 300′, 32-story mixed use luxury residential and retail development within walking distance from Yale University. Costing $180 million, the multi-use modernist building features 500 luxury apartments (including 50 affordable units) and 25,000 sq ft of retail space. At the time of its completion, it was the second-tallest building in the city, and the largest apartment building in the state.

360 State Street contains numerous energy-efficient technologies, such as occupancy sensors and heat-recovery systems, using 50% less energy than a energy baseline residential building. Most impressive is the massive 80,000-pound fuel cell installed to power the property. “…to date, this one is the largest fuel cell to operate a residential building in the world, and the only one of its kind in the U.S.,” (Levine, 2010).

A sub-contractor for the General Contractor Suffolk Construction, Let It Grow, was awarded the streetscape and the 6th floor terrace portions of the project. The scope of work for the 6th floor terrace included decorative and concrete pavers, unique stone settings, pool coping, precast curbs and walkways; landscaping and irrigation. As with all rooftop installations, solving the material handling puzzle to stage and lift almost 600 cubic yards of growth media and a large volume of plants including turf grass, natives, shrubs, and mature trees required close integration with vendors. The logistics specialists at Garick were critical to getting approximately 20 tractor trailers of super sacks to the jobsite on time and on demand in order to keep a smooth operation flow 6 stories above grade.

Let It Grow continues to expand its expertise and capabilities for green roof implementations, and the opportunity to help build a green design project at this level was highly gratifying, and demonstrated Let It Grow’s ability to cope with the challenging demands while performing challenging and rewarding work. Partnering with experienced green roof industry professionals like the rooflite team, and their Connecticut licensed blender Garick, helped to ease the burden on an inspiring project.