Urban heat islands are metropolitan places that are hotter than their outlying areas, with the impacts felt most during summer months. About 85% of the U.S. population lives in metropolitan areas. Paved roads, parking lots, and buildings absorb and retain heat during the day and radiate that heat back into the surrounding air. Neighborhoods in a highly-developed city can experience mid-afternoon temperatures that are 15°F to 20°F hotter than nearby tree-lined communities or rural areas with fewer people and buildings.

Climate Central, an independent organization that researches climate change, released a report on July 14 that ranks 159 US cities by their urban heat intensity index. The study refers to these cities as “urban heat islands.”

Each city was given an index score which represents the average temperature difference between the city and what the heat may have been in that location if not an urban area. 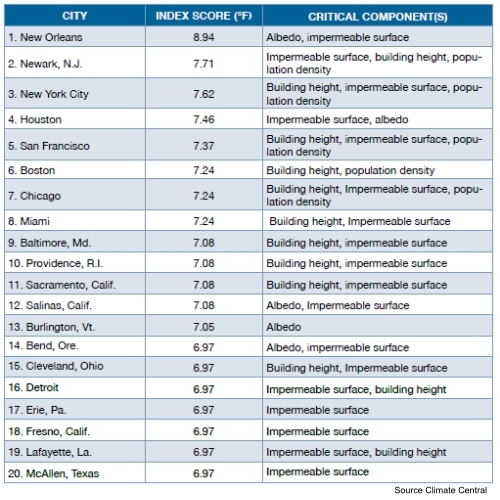 This score was primarily based on – in order of consideration – albedo (the reflectivity of the surfaces in the city, such as rooftops and roads), percentage of greenery, population density, building height, and average street width and city irregularities. 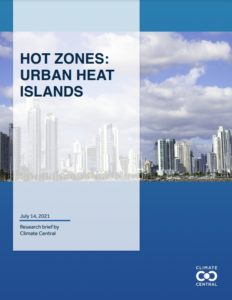 This report looks at the factors that contribute to the heat island effect, and analysis that will show how they vary in places across the United States. Discussions of some of the impacts of higher temperatures on human health and the built environment is described. Also, a look is provided at how communities are adapting to these new normals with considerations to solutions for lessening some of the intensity of the urban heat island.

Longer-term solutions are often more difficult in terms of planning and finding adequate resources and funding, and not all mitigation strategies work for all places: