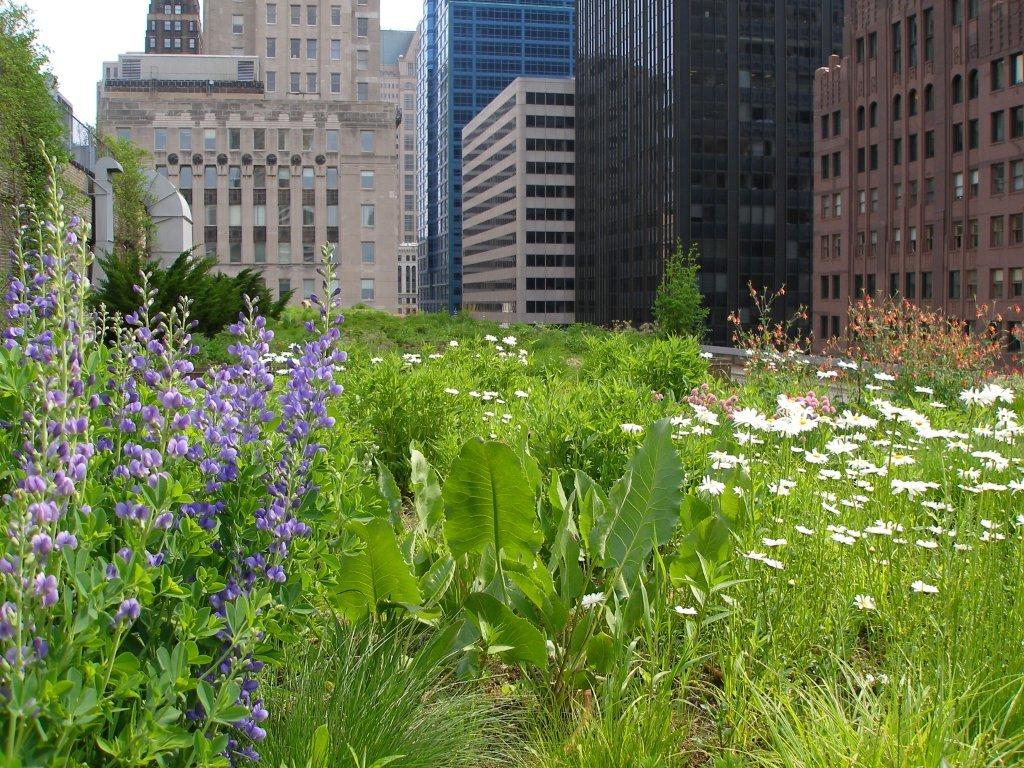 The Chicago City Hall Greenroof is not open for public tours. Visit their website and the City Hall’s Rooftop Garden page.

Chicago’s Green Rooftops: A Guide to Rooftop Gardening from the City of Chicago; Wikipedia.

As part of an EPA study and initiative to combat the urban heat island effect and to improve urban air quality, Mayor Richard M. Daley and the City of Chicago began construction of a 38,800 square foot (total roof area) semi-extensive greenroof in April 2000. It was completed at the end of 2001 at a cost $2.5 million, funded by a settlement with ComEd. Encompassing one square block and twelve stories high, this retrofit application serves as a demonstration project and test greenroof. The project was completed in the summer of 2001 and will be monitored for plant survival as well as other environmental features. Chicago City Hall’s greenroof saves $5,000 a year on utility bills, according to Michael Berkshire.

“This is unique to Chicago,” said Richard Price of the Virginia-based William McDonough & Partners, the architectural firm who designed the roof. “No one else has looked at rooftop gardens to mitigate urban heat island effect, which is a process whereby highly urbanized areas with hard surfaces tend to be degrees hotter than green areas,” (ENN.com, May 2000).

According to a March 1, 2002 article in The Wall Street Journal, “The garden’s origins can be traced back ten years, to when the city’s electric utility, Commonwealth Edison, failed to make good on a 1991 franchise agreement. The city “sought legal recourse through binding arbitration and won a $1.1 billion settlement,” explains Jessica Rio, spokesperson for the Chicago Department of Environment (DOE). Some of that is being used to support Chicago mayor Richard Daley’s vow to make Chicago “the greenest city in America.” As part of the March 1999 settlement, the utility established a $100 million “fund for the future” administered by the DOE, $2.5 million of which was committed to found the DOE’s Urban Heat Island Initiative (UHII) in late 1999.”

This project is winner of the American Society of Landscape Architects 2002 Professional Merit Award.

Roofmeadow Types II: Aromatic Garden, IV: Meadow 1, and Omega: Woodlands vegetation were used. Since the Chicago City Hall occupies only half of the entire building – sharing with Cook County’s administrative offices – weather stations have been assembled on both sides of the roof: one green and one tar. Test data will be collected from monitoring temperature, rainfall, wind speed and direction (John Beaudry, June 2000). See a PDF of the August 8, 2001 Chicago City Hall Temperature Fluctuation Differences between both sides of the building, greened (City Hall) vs. barren (Cook County).

The 20,300 square foot City Hall rooftop garden has over 20,000 herbaceous plants installed as plugs of more than 150 varieties including 100 woody shrubs, 40 vines and 2 trees – a Cockspur Hawthorn and Prairie Crabapple. Although rainwater will be collected and saved from the 7,700 square foot penthouse, a supplemental irrigation system will aid in establishing the plants as well as provide supplemental water during extreme periods of drought (Landscape Architecture Magazine, September, 2000; John Beaudry, June, 2000).