West Gorton Park had ‘drunk’ the rainwater, releasing it into the sewer systems over time rather than all at once – slowing the deluge of water that causes flooding. The water seeped into unsealed pavements, shallow depressions under trees and swelled into mini ponds next to paths, while excess water collected in a ‘rain garden’ which looks like a mini waterpark that children can play in.

As the world’s climate changes, scientists expect an increase in the frequency and intensity of extreme weather events, such as the heavy rainfall that can cause flooding. The European Union’s adaptation strategy encourages member states to make their countries more resilient to the effects of climate change, and across the continent, researchers are looking for new and innovative ways to adapt to these expected extreme weather events.

West Gorton Park is one of three pilot sites in a project called GrowGreen, explains project coordinator Michelle Oddy. ‘The overall project is about trying to demonstrate how you can use nature-based solutions to tackle the impacts of climate change,’ said Oddy, a project manager at Manchester City Council. Nature-based solutions draw their inspiration from the natural world and look to protect and sustainably manage ecosystems while benefiting people.

The GrowGreen team adapted the idea of a ‘sponge city’ – in which the natural environment acts as a slow-release sponge for water – from projects they had seen in Wuhan, China, which is another partner in GrowGreen, says Oddy. ‘And it worked (during the storm).’

The other sites, in Valencia, Spain, and Wroclaw, Poland, are working to combat heat stress and flooding.

In Valencia, the project has set up a vertical garden at a school to collect rainwater, lower temperatures, and reduce the noise coming from the school, while it installed a green roof at a local old age home. It is also developing a small forest and ‘blue-green’ corridor  – a nature corridor between built up areas. ‘They are really doing a deep dive on (plant) species selection,’ said Oddy. For example, ‘if you’re building a new forest, planting new trees, which are the best ones?’

Meanwhile, in Wroclaw, courtyards in numerous tenement buildings now contain swales (small depressions) and rain gardens to absorb heavy rain, as well as many trees for residents to shelter under.

‘(All the projects) are working to the same hypothesis – you can reduce some of the impacts of climate change with nature-based solutions,’ explained Oddy. ‘But we all have a different angle on it.’

The ultimate goal of GrowGreen is to develop a toolkit that showcases a range of options for different scenarios and lessons learnt, so that other cities around the world can implement such strategies to combat the effects of climate change. 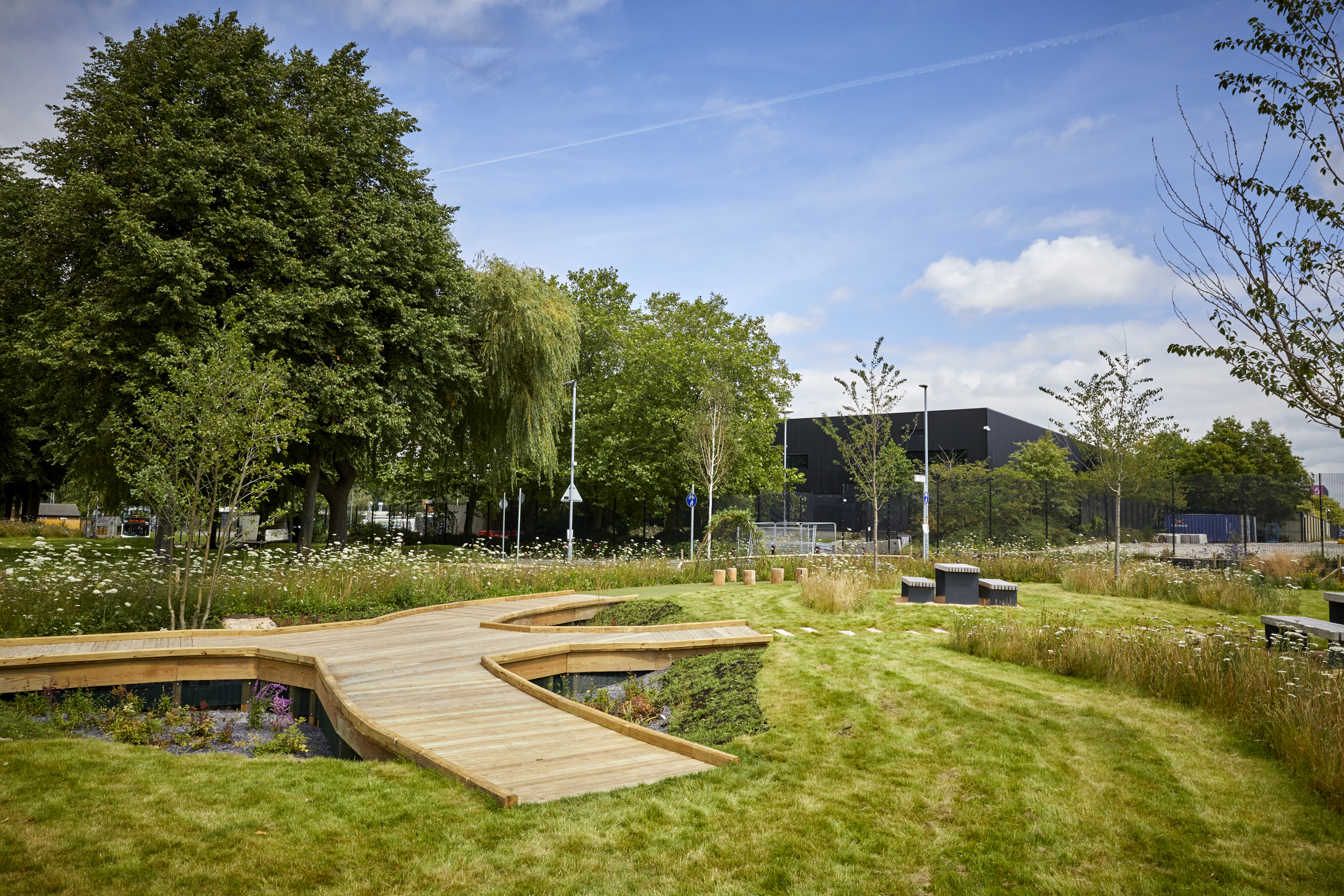 The work could help overcome one of the problems in implementing new solutions to adapt to climate change – that most innovations struggle to show their value.

‘Governments want proof, but innovations are often unproven,’ said Bas Jonkman, a professor of hydraulic engineering at Delft University at the Netherlands. Prof. Jonkman was scientific coordinator for the BRIGAID project, which ‘wanted to bridge the gap between innovators who have a smart idea and end users, such as governments and companies, and build a bridge between those two worlds.’ This gap can take many forms, depending on the innovation, and ranges from technical expertise with prototyping, through to access to finance or potential markets.

BRIGAID looked to assist innovators working on products that create resilience to floods, droughts and extreme weather. As part of the project, the team guided 30 such innovations, offering in-depth technical, market and testing support, although their network includes about 120 innovations.

An important aspect of the project was offering innovators test sites so that they could gauge the technical promise of their products. Delft University already had ‘Flood Proof Holland’, a site where researchers and innovators could simulate floods and test their defences. As part of BRIGAID, Romania developed its own ‘Flood Proof Romania’ testing site.

‘We found that with these pilot sites, we could test and showcase temporary flood defences, and attract potential clients to show them how the innovations worked,’ he said.

‘We’ve developed a whole set of tools and methods to assess, support and improve technological readiness of innovations, and help innovators make a business plan,’ Prof. Jonkman said. The TIF Tool, for example, is a step-by-step guide to assess a technology’s technical and market readiness, and the project’s Brigaid Connect initiative connects innovators to possible users.

One of the projects BRIGAID supported, Bluebloqs, is a nature-based solution to reuse rainwater in urban areas. The Bluebloqs system, which on the surface looks like a planted square in a city, collects rainwater at street and house level, retains and purifies it using a biofilter, and makes it available for later use.

“The people who live around this park are not interested in the flood risk mitigation measures –– they are just happy to live next to a beautiful park.”
Michelle Oddy
Project Manager
Manchester City Council, UK

First installed in Spangen, Rotterdam, to absorb intense rainfall and create a green space for locals, Bluebloqs has an advantage that initiatives like GrowGreen don’t: the benefits of the system can be felt immediately by the people who live near it. This is not always the case for ‘sponge’ projects and other flooding interventions.

With a lot of nature-based solutions, even though they are often cheaper than large, heavily engineered interventions, ‘the stakeholder who pays for it is not necessarily the stakeholder who benefits’, said GrowGreen’s Oddy. ‘You take gentle steps along the route of the river and avoid the big calamity downhill.’

But that is why Manchester is marrying its flood-risk interventions with other benefits, such as the health benefits of green spaces. ‘The people who live around this park are not interested in the flood risk mitigation measures – they are just happy to live next to a beautiful park,’ said Oddy.

Manchester City Council, however, has noticed the benefits of nature-based solutions. The city already had large greening developments in the works, including a 6ha redevelopment of Mayfield along the Medlock river. ‘This park is lovely but small, and because we have demonstrated that sustainable urban drainage features work and are not that difficult to do, they will be a feature of every development that Manchester does now, baked into everything we do,’ said Oddy.