In order to combat the consequences of climate change such as urban flooding and heat island effects, sustainable measures needed to be adopted. The city of Amsterdam partnered with RESILIO to come up with an innovative and sustainable idea of smart blue-green infrastructure to make the city climate resistant.

What is a blue-green roof?

You must be wondering, “Okay, so I know about green roofs but where is this blue coming from?” Well, conventional green roofs have a drainage layer for the lateral drainage of water. On the other hand, blue roof technology has a water storage layer, so when it rains, the rainwater does not run down to the drain pipe but is instead stored there. Then it gradually provides the soil moisture required for the roof greenery, plants, and trees. This is accomplished by a capillary suction tube network that connects the soil to the subsurface water reservoir.

In comparison to green roofs, blue-green roofs provide a higher water retention capacity, allowing them to release evaporation for a longer length of time during hot, dry weather. 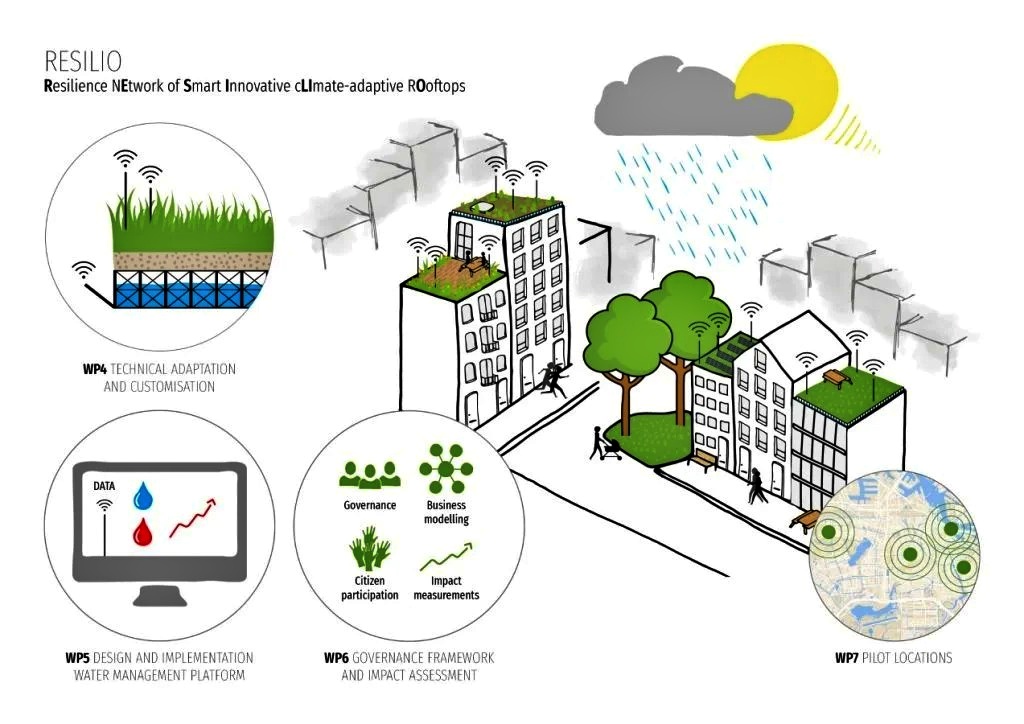 Climate change is having an impact on Amsterdam, with flash floods due to heavy rainfall, extreme weather, and increased droughts. By reusing the rooftops of Amsterdam neighborhoods that are sensitive to climate change and introducing an innovative green infrastructure, the RESILIO project seeks to address significant climate concerns relating to floods, urban heat island effects, water supply, energy consumption, urban livability, and other hydrological problems. Under the Climate Adaptation theme, the Urban Innovative Actions (UIA) program is providing funding for RESILIO.

In 4 different Amsterdam neighborhoods, housing associations’ social housing complexes had blue-green roofs constructed as part of the RESILIO project. Green roofs are presently thriving in the communities of Oosterparkbuurt, Kattenburg, Slotermeer, and de Indische Buurt. Additionally, many other buildings are also covered in blue-green roofs as a result of municipal subsidies. A total of 12.683 square meters of blue-green roofs have been built. Through micro water management, Amsterdam has tried to control the rainwater on these roofs.