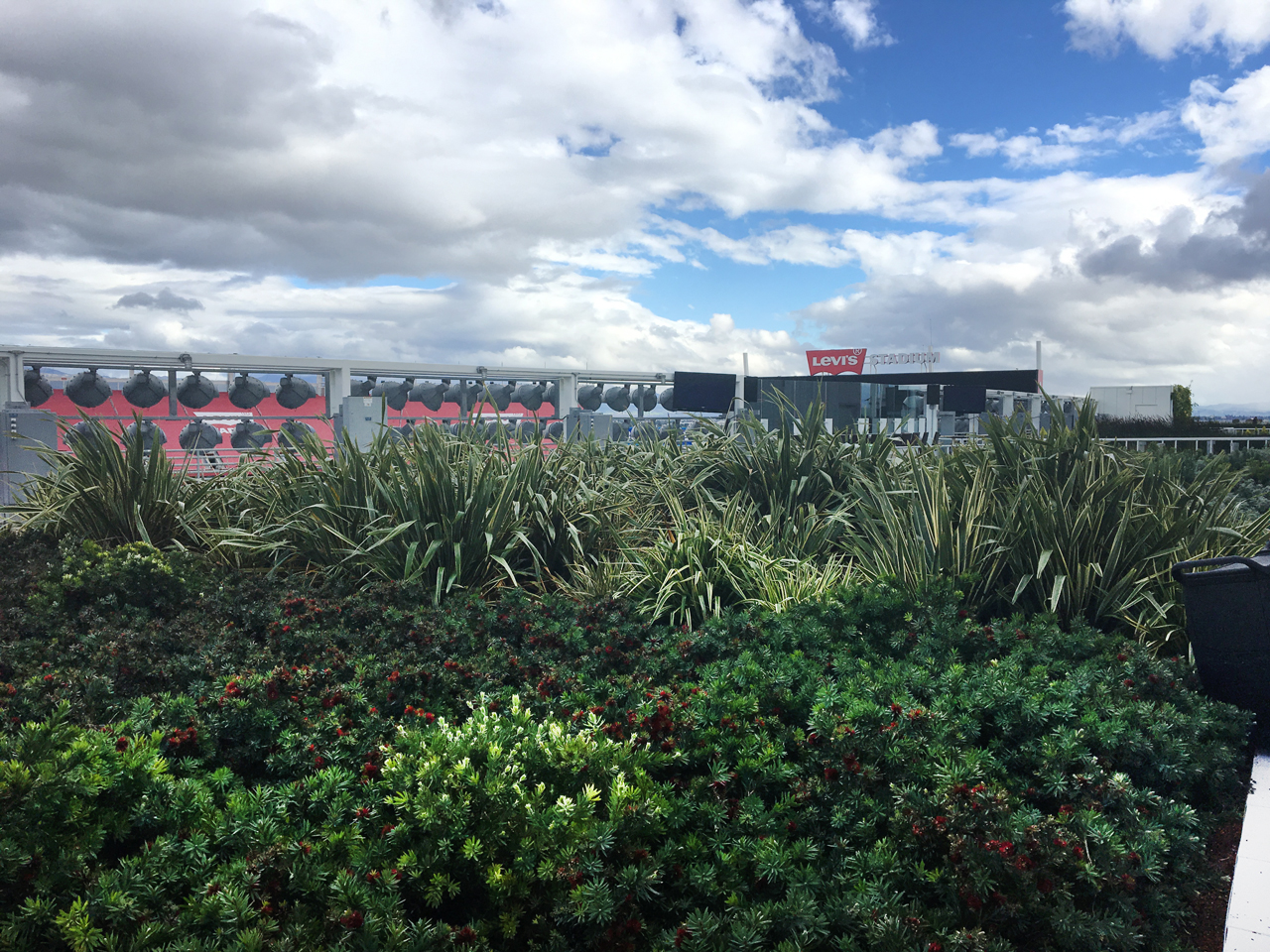 With football season underway here in the U.S. and Canada, we figured it would be a great idea to remind our readers of the awesome sustainable design of Levi’s®Stadium and its huge green roof with our Video Replay from 2015. 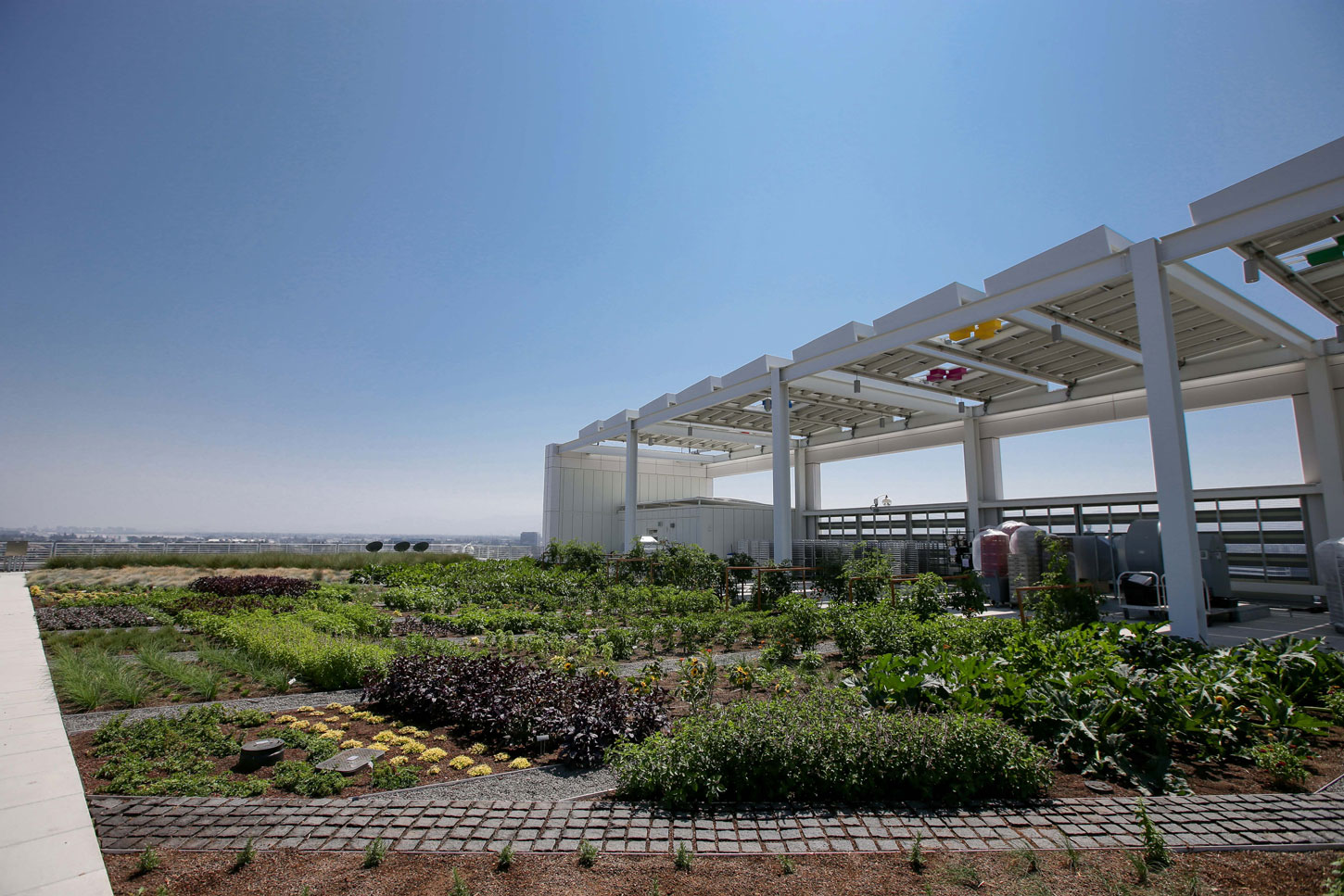 Since the summer of 2016, the home of the 49ers has been cultivating a variety of crops on their Faithful Farm stadium roof.  We hope you enjoy the replay, and make sure to click the Project Profile links so you can learn more about their rooftop farm, another first in the NFL! 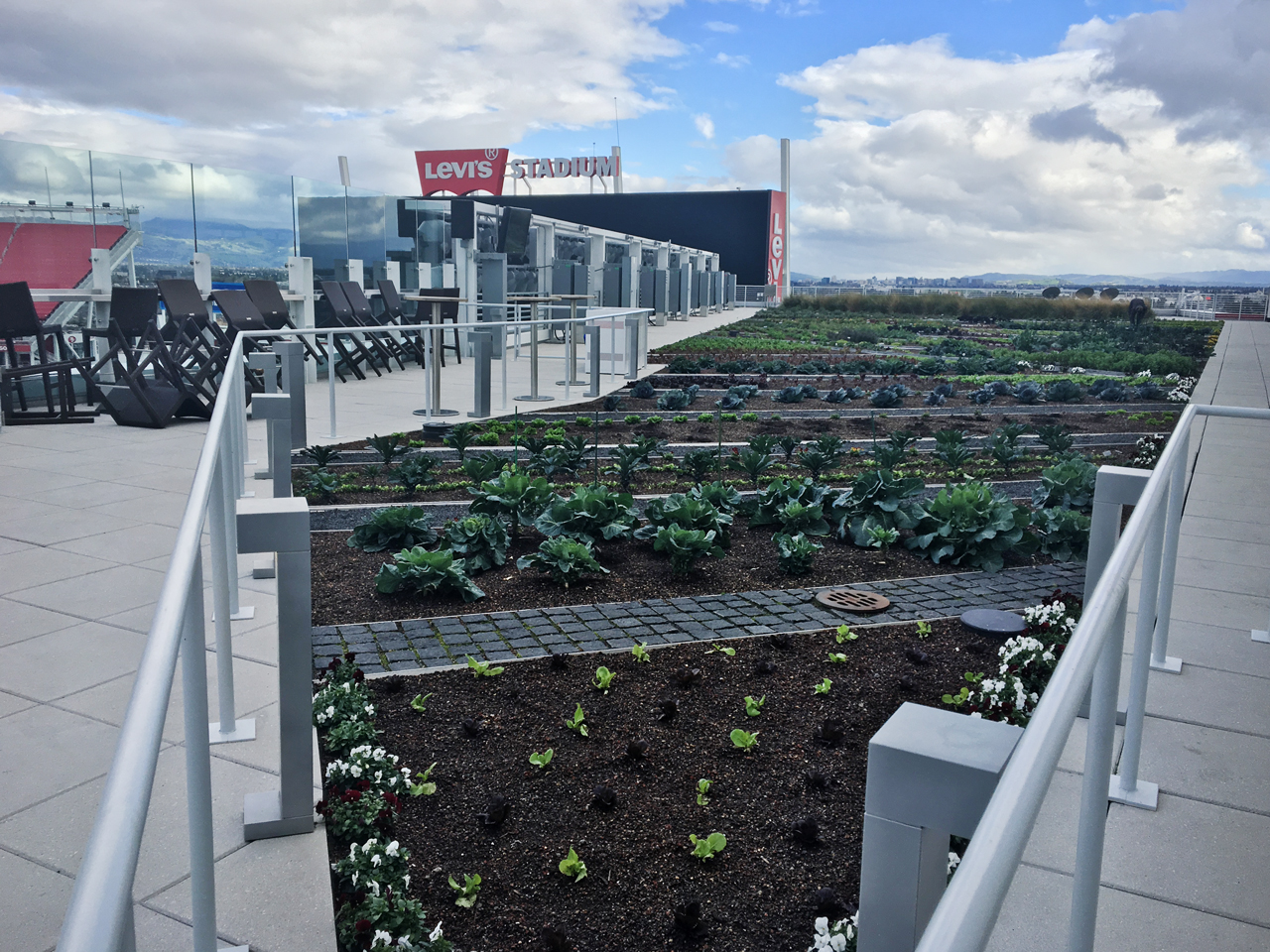 Hosting the Super Bowl 50 on February 7, 2016, Levi’s® Stadium is a $1.27 billion multi-purpose facility with the flexibility to host a wide range of events with seating for about 68,500 people, featuring 176 luxury suites and 9,000 club seats. 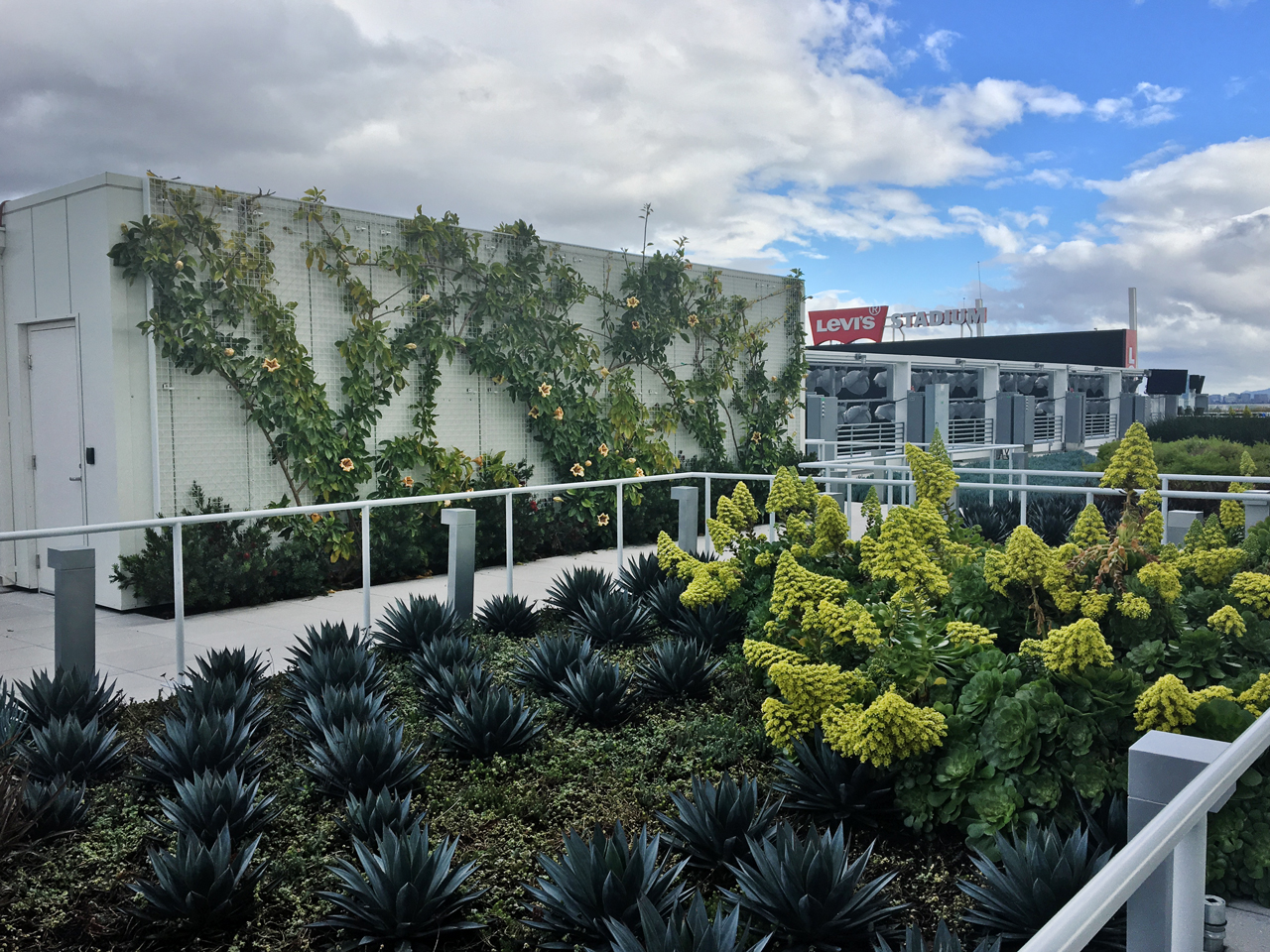 State of the art technology is used throughout the stadium, and visitors may view a live dashboard display featuring current energy measurements, water and air monitors, and other dynamic green features as the building operates daily.

Designed by HNTB, the iconic feature of the stadium is the massive 5-story Suite Tower on the west side, topped by the NRG Solar Terrace green roof. 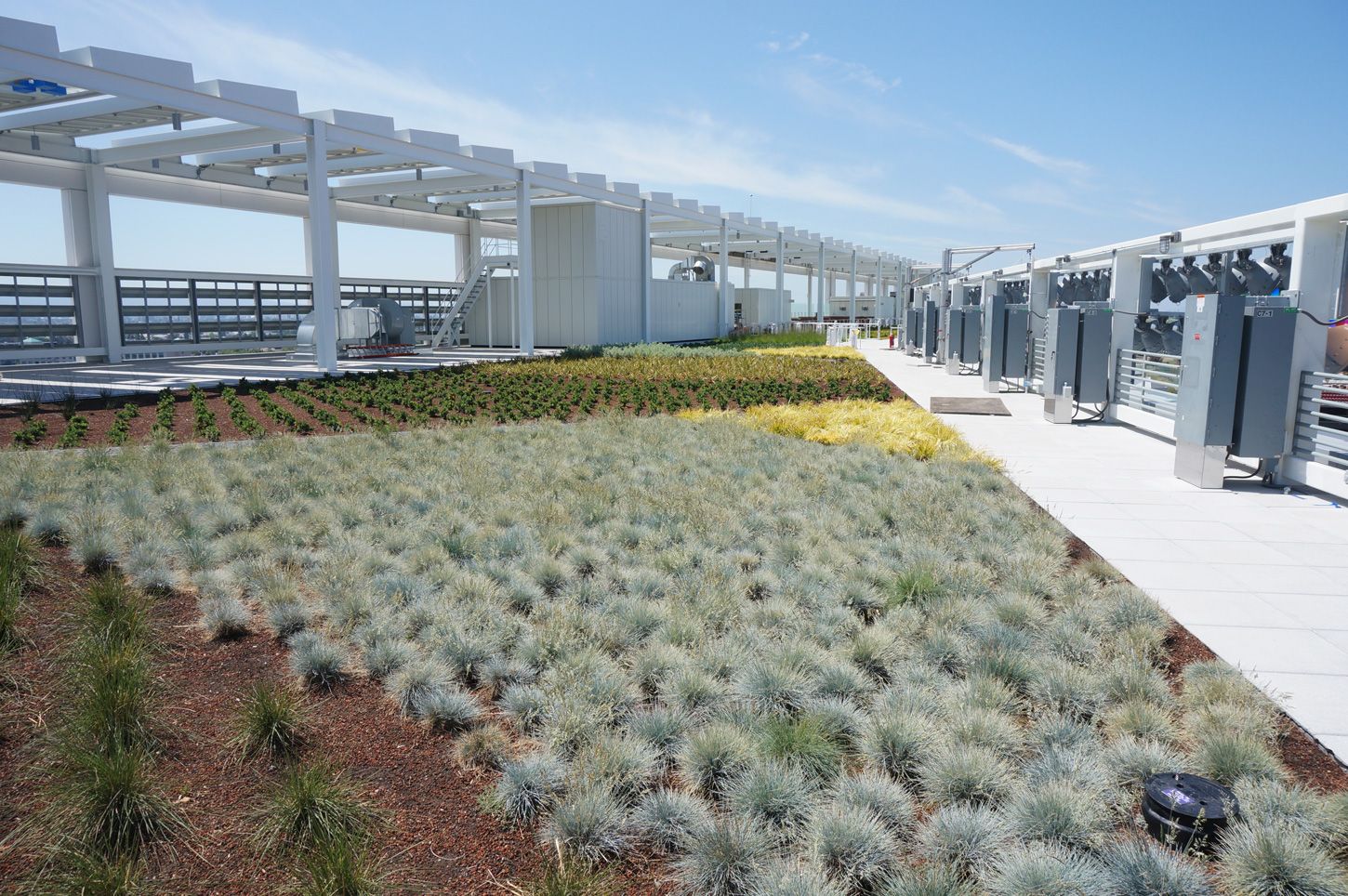 The installation of 1,186 solar panels on the canopy framework on the green roof and on three solar pedestrian bridges connecting the parking lot to the park generate 375 kW of power at Levi’s Stadium – as much renewable energy as it will consume on game days.

And the NRG Solar Terrace green roof is an inviting space which can be booked for receptions and ceremonies. 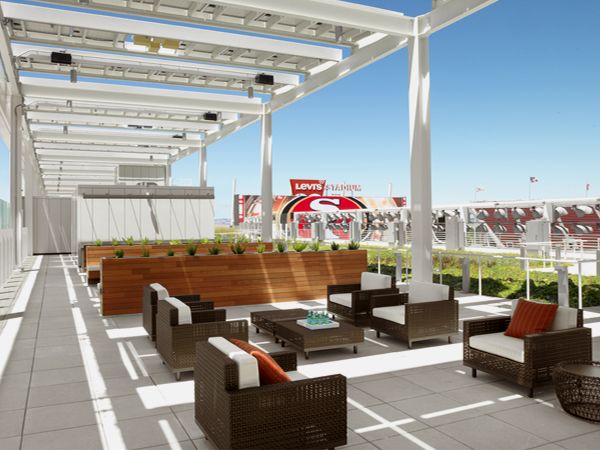 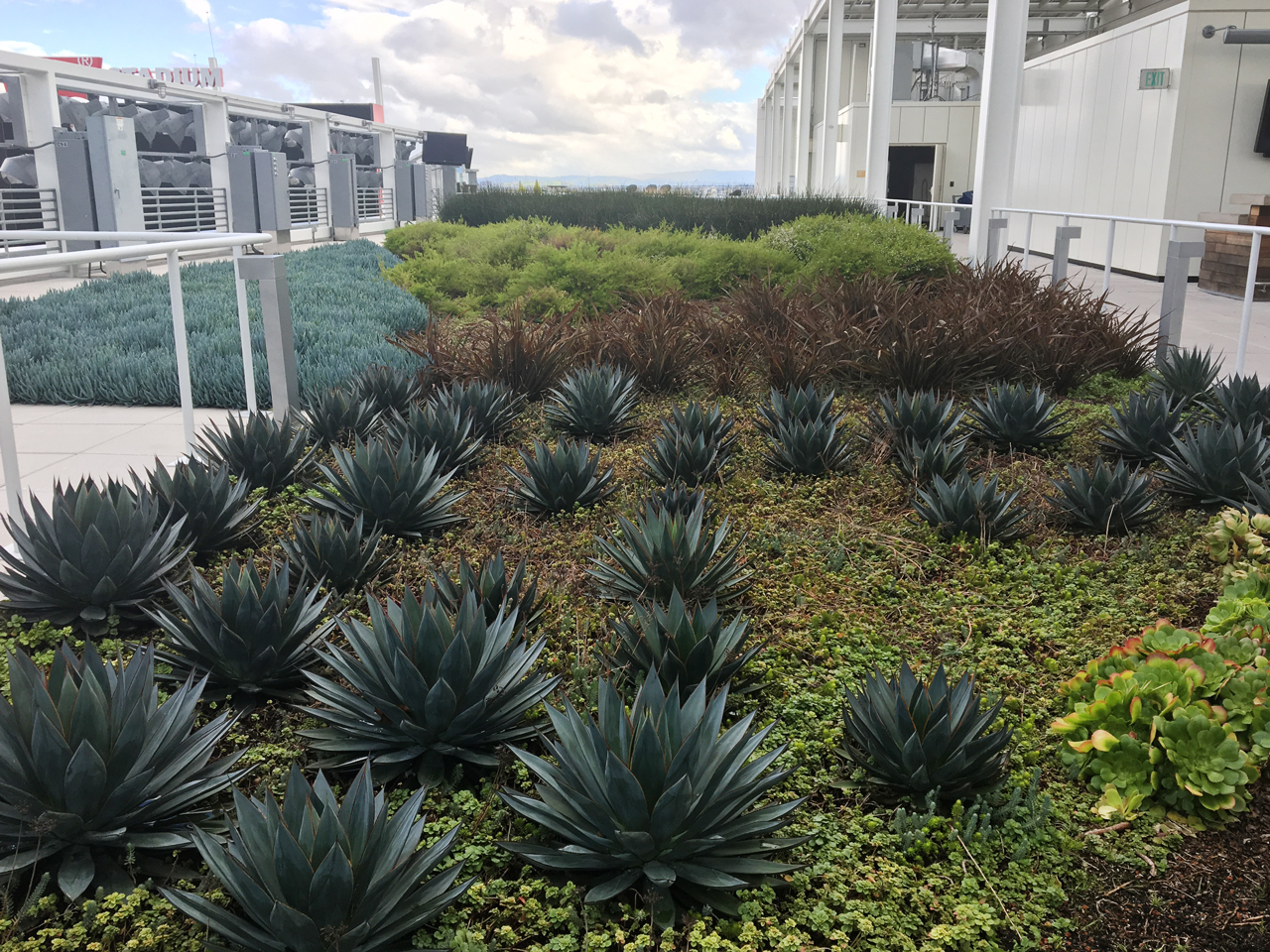 The 27,000 square foot American Hydrotech green roof contains 16 species of vegetation native to the Bay area for the concessionaires, who will utilize produce within local farm-to-table menus. 85 percent of the water used at the stadium is recycled, used for both potable and non-potable uses such as the playing field irrigation water.

In July 2016, Levi’s Stadium converted 6,500 square feet of the green roof to a rooftop farm, the brainchild of Danielle York, wife of San Francisco 49ers CEO Jed York. The first to top an NFL stadium, the Faithful Farm is a vegetable and herb garden, maintained by Farmscape Gardens.

Herbs, tomatoes, peppers, zucchini, leafy greens and edible flowers are among the 40 rotational crops which are harvested for use in dishes served at Levi’s Stadium in club spaces during games and at the more than 200 private events hosted at the stadium each year. 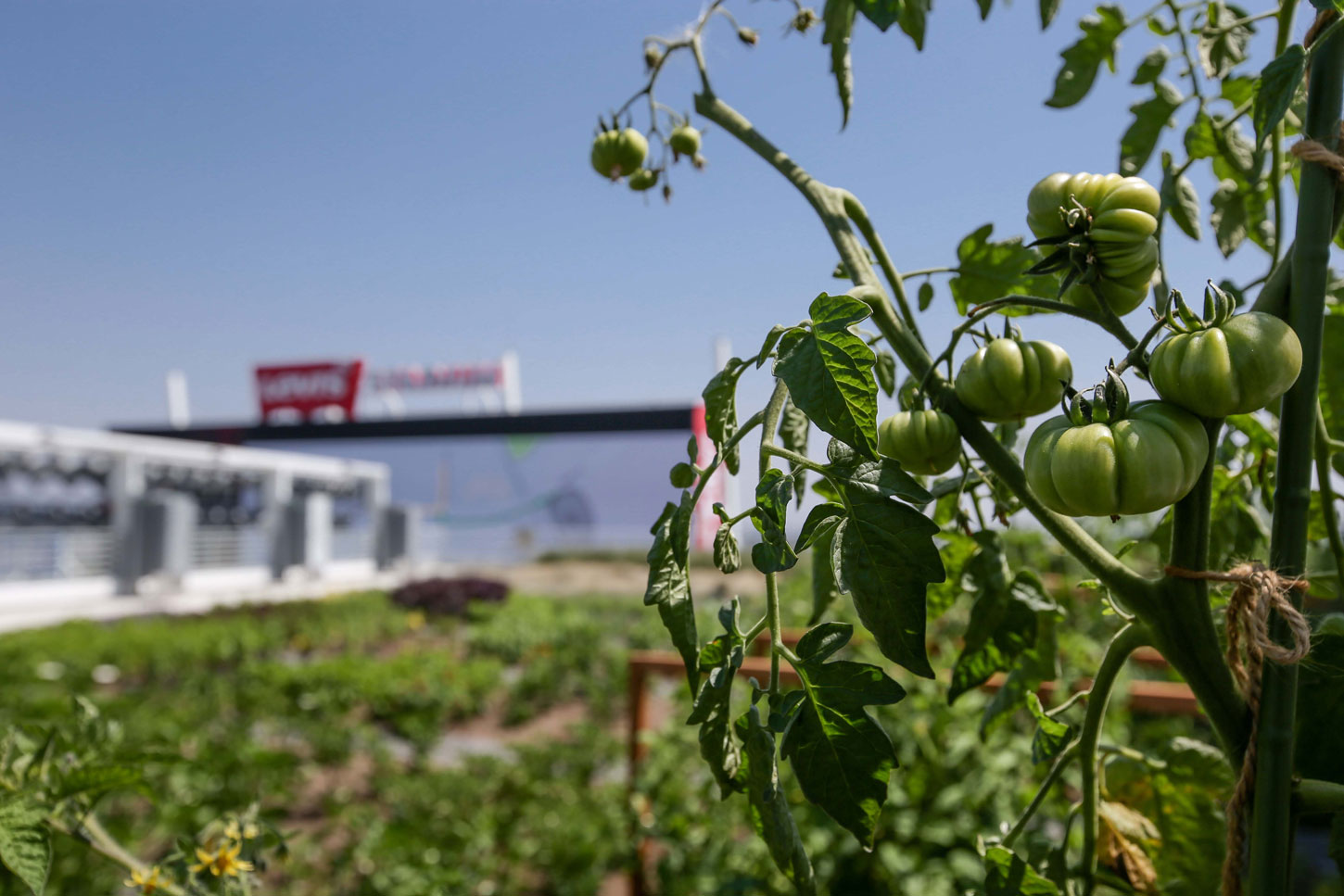 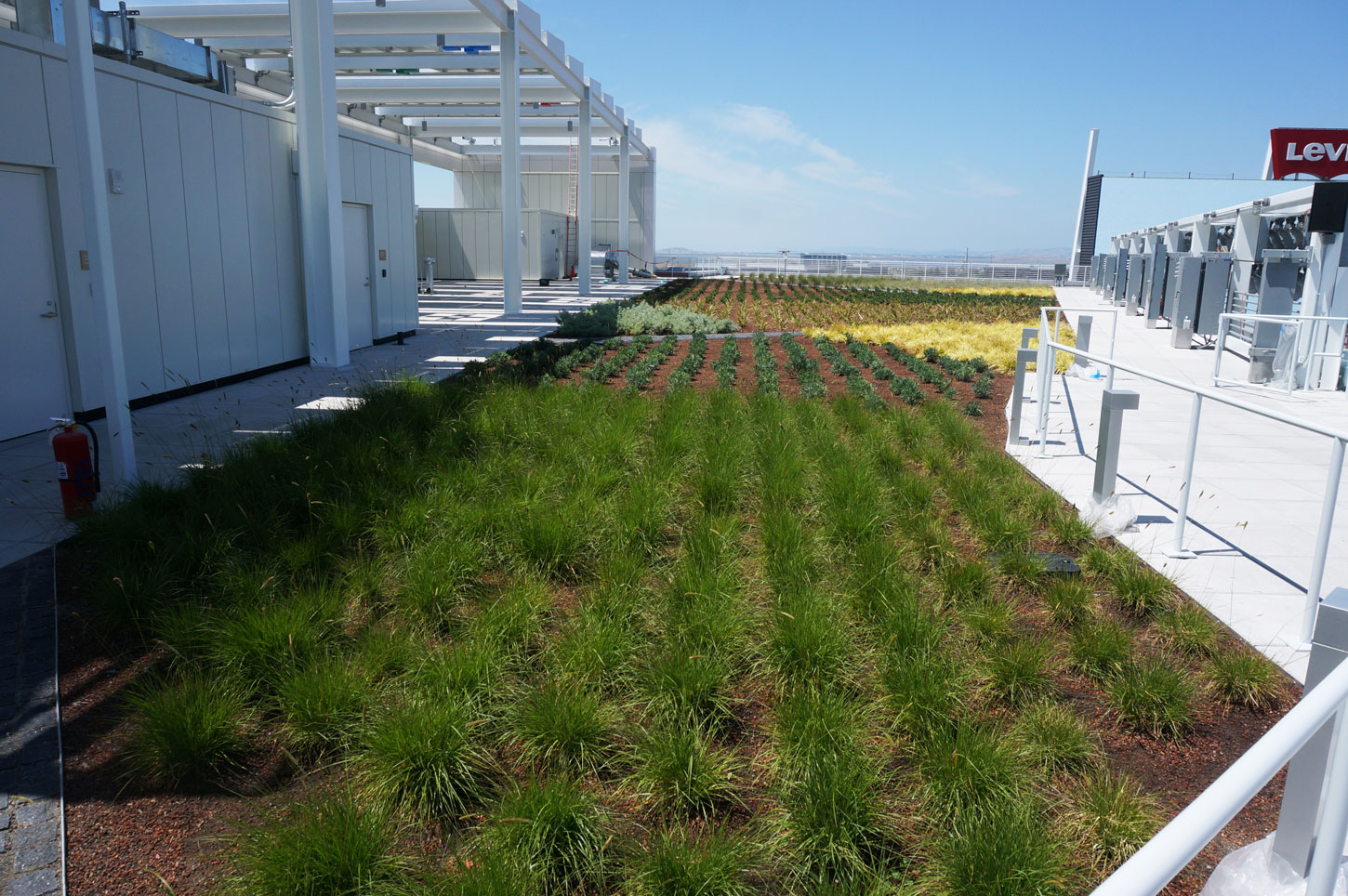 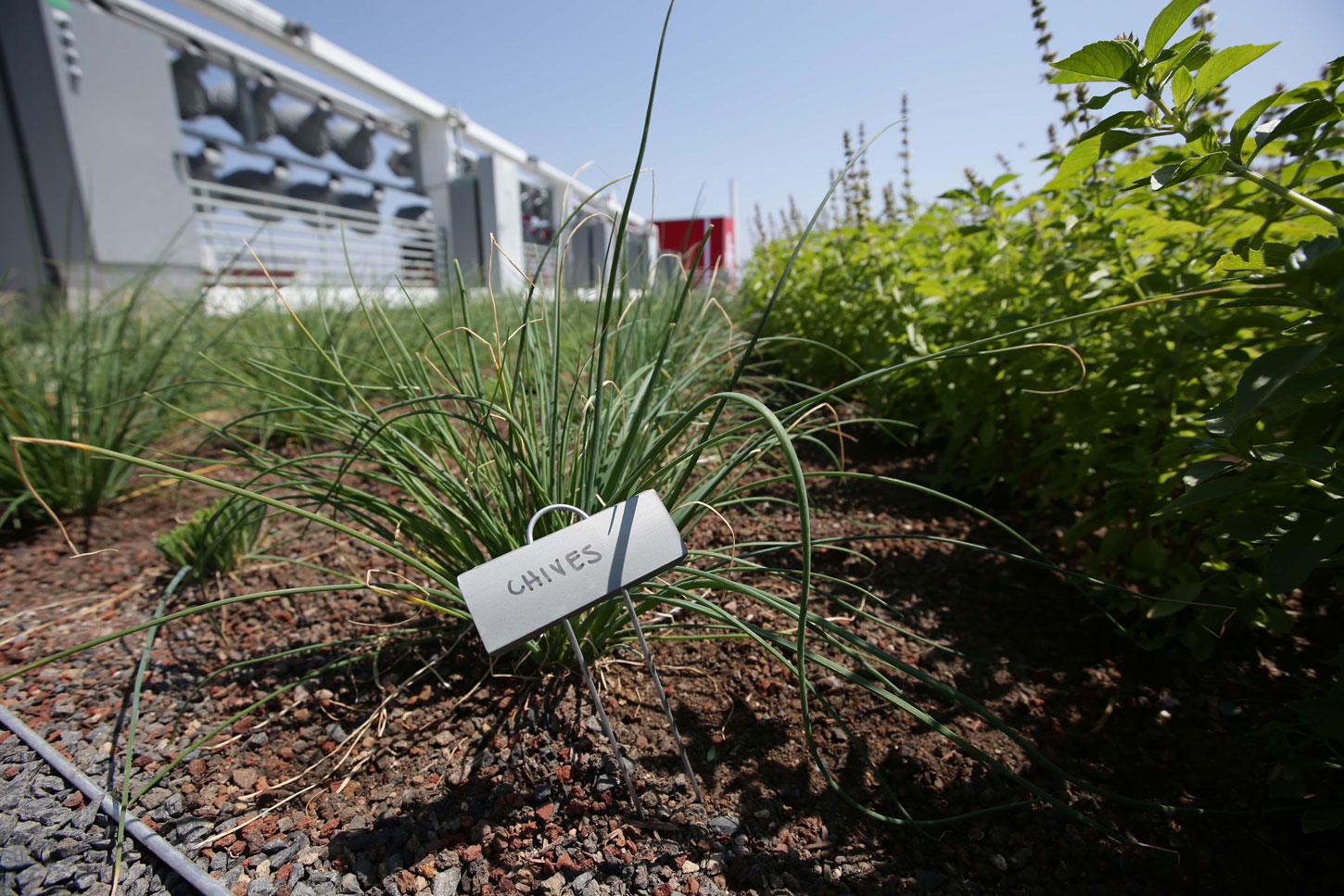 See the Levi’s® Stadium project profile to see ALL of the Photos and Additional farm roof Information about this particular project in the Greenroofs.com Projects Database. 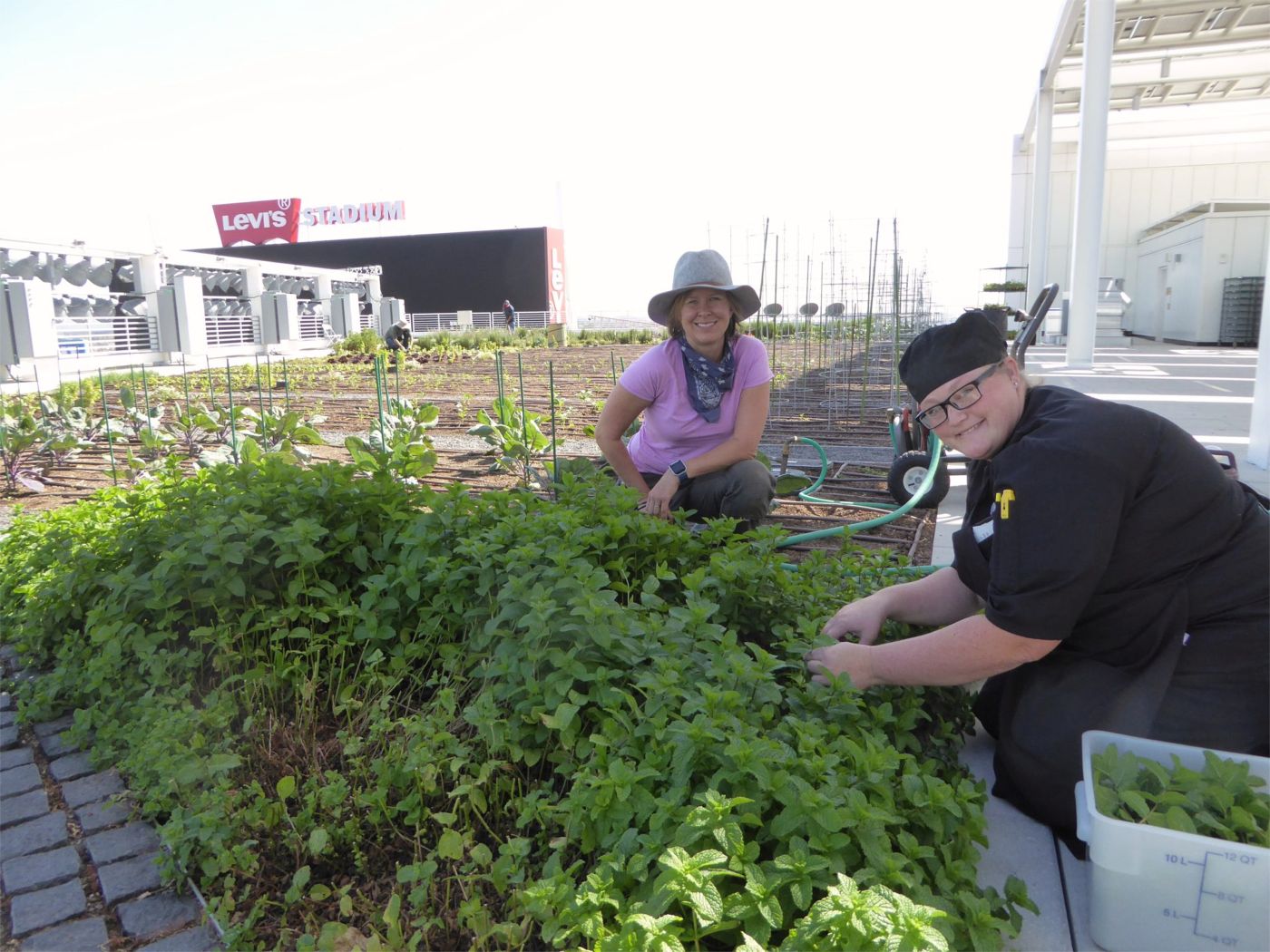 Join us in November for our 5th biennial Virtual Summit!

Urban Ag
What Do the NFL and Rooftop Farming Have in Common? Levi’s Stadium 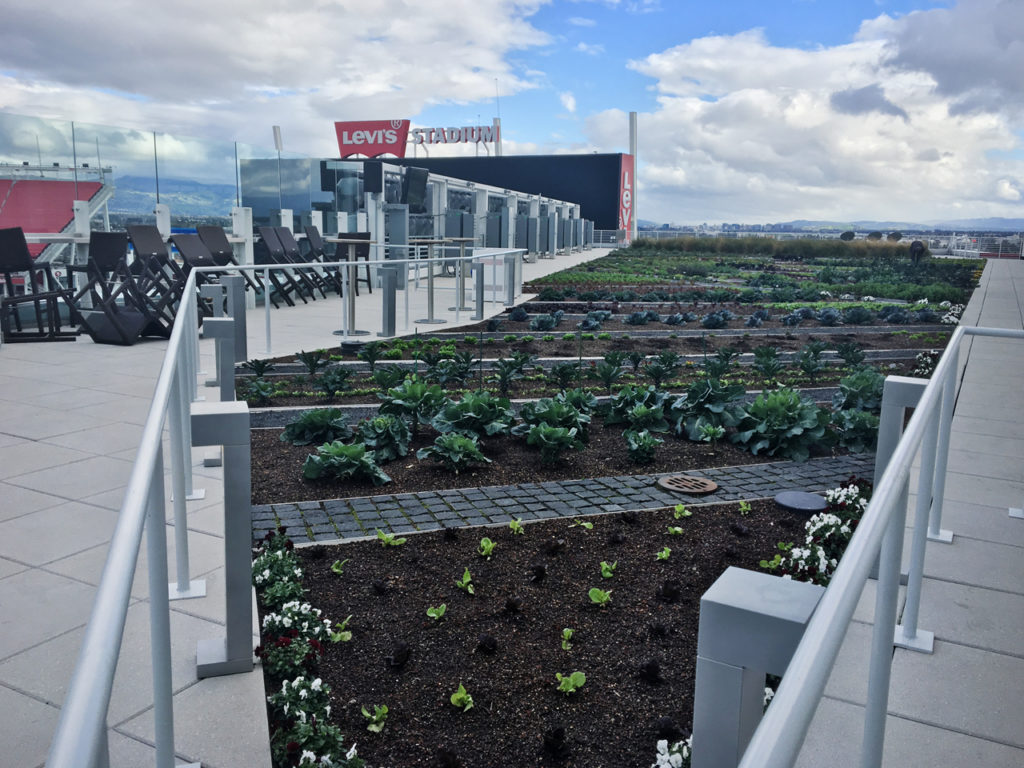 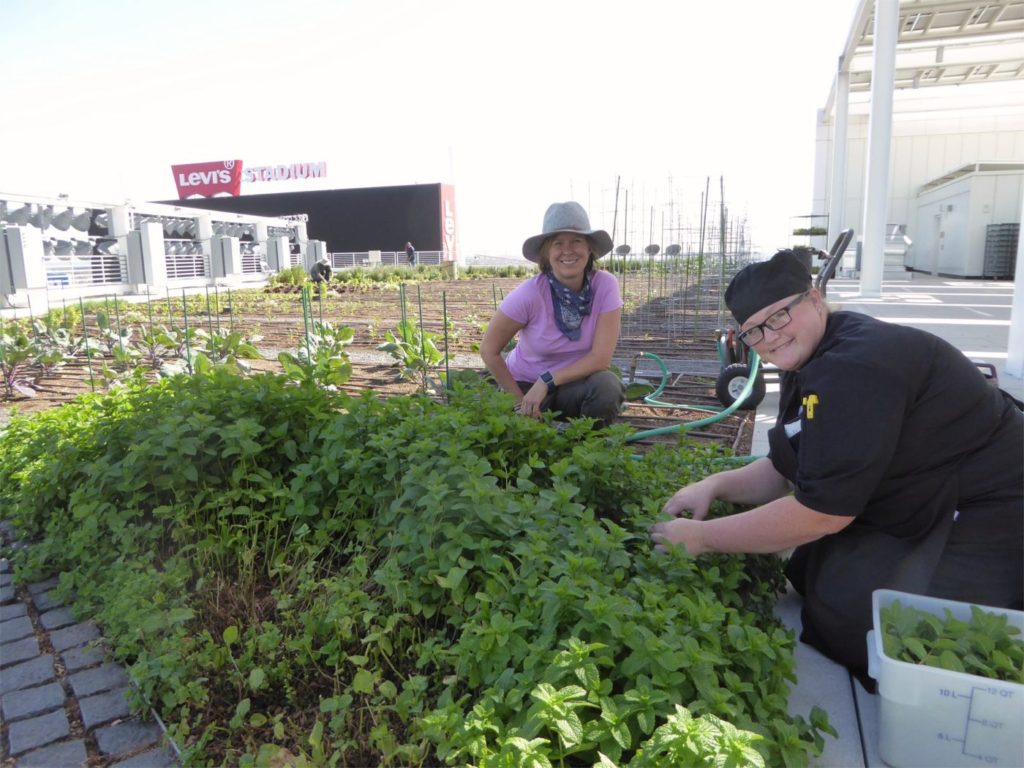 Featured Projects
Project of the Week for February 1, 2016: Levi’s® Stadium