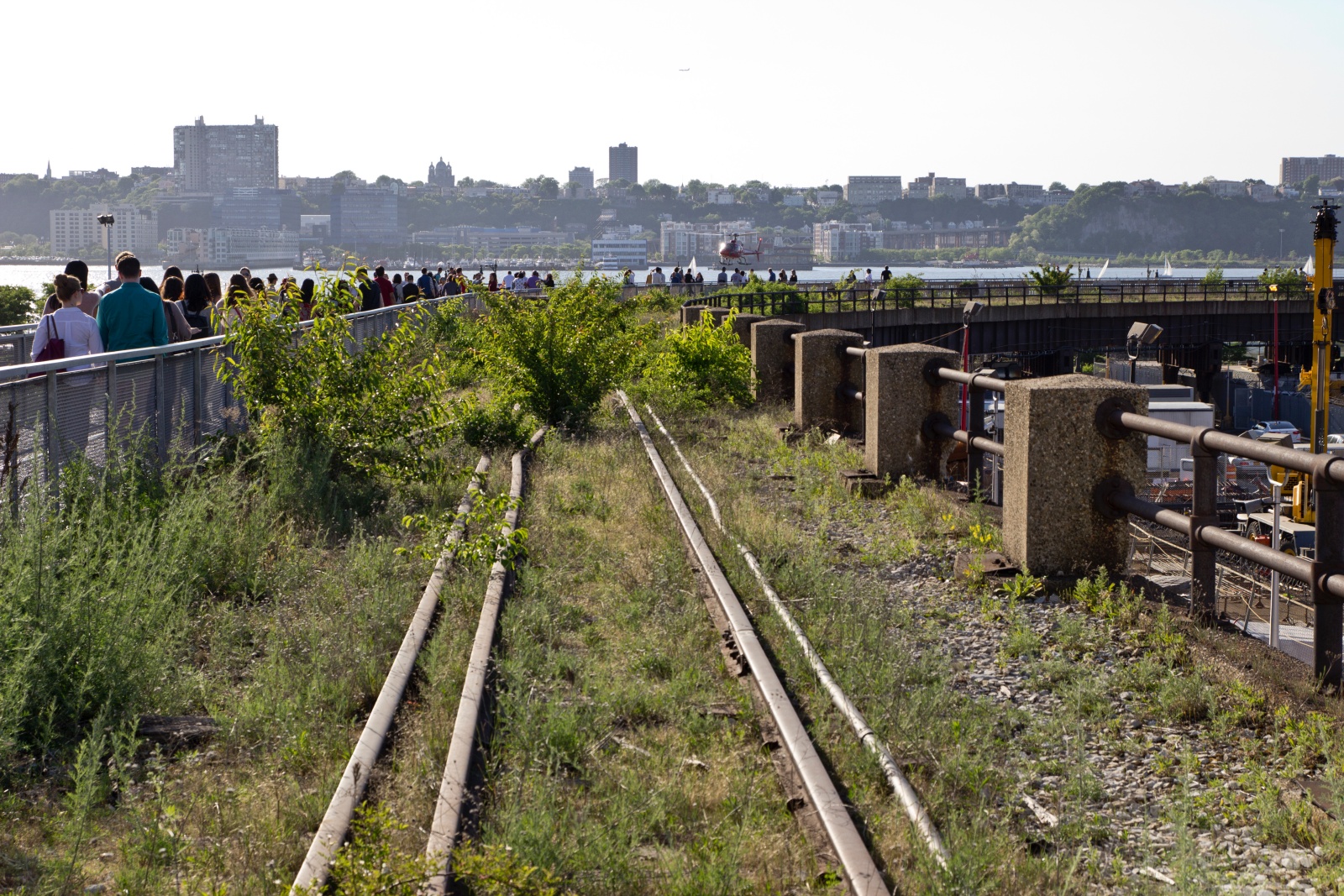 Friends of the High Line works in partnership with the City of New York to preserve and maintain the structure as an elevated public park. Visit the official High Line website; and specifically their About and Sustainable Practices pages.

May 11, 2021 Featured Project: High Line Phases 1, 2 & 3 by Linda Velazquez in Greenroofs.com; March 20 2015 The High Line, NYC by Tazi Phillips in TimeOut New York; April 28, 2015 The Ultimate Guide to the High Line by Elissa Garay in Fodor’sTravel; September 23, 2014 Take a Walk on the High Line with Iwan Baan by Karissa Rosenfield with excellent photos of all three phases in ArchDaily; September 22, 2014 The 5 Best Things About The New High Line by Shaunacy Ferro in Fast Co Design; and the May 2, 2012 The High Line as a Green Roof by Erika Harvey from The Friends of the High Line Blog.

The High Line was designed by the landscape architecture firm of James Corner Field Operations (whose mantra throughout the design process was ‘Keep it Simple, Keep it Wild, Keep it Slow, and Keep it Quiet) and architects Diller Scofidio + Renfro with planting design from Piet Oudolf and engineering design by Buro Happold. Created in three phases over a period of eight years, each section of the High Line measures about .5 miles: Construction started in 2006 and Phase 1 covering 9 blocks opened in 2009; Phase 2 covering 10 blocks opened in 2011; and Phase 3 started in 2012 and was opened to the public in 2014. Although the High Line is one continuous project, the profiles here are presented as a series of three since they were constructed over different time periods with distinct features. See the profiles for Phase 1 and Phase 2 in the Greenroofs.com Projects Database.

Located in New York City’s Meatpacking District, the High Line was an elevated railway originally constructed in the 1930s to lift dangerous freight trains off Manhattan’s expanding streets; abandoned in 1980, it was left to naturalize and fell into disuse. The non-profit group “Friends of the High Line” was founded by Joshua David and Robert Hammond in 1999 to advocate for its preservation and reuse as a public park. In 2002, Friends of the High Line finally won a lawsuit challenging the City’s plans for demolishing the remaining tracks. In 2003 a design competition was launched to solicit proposals for reusing the High Line.

Today the High Line is an elevated public park owned by the City of New York and operated under the jurisdiction of the New York City Department of Parks & Recreation. The first section starting at Gansevoort Street opened to the public in June, 2009. The second phase from 20th Street to 30th Street opened in June, 2011.

Distinct features found in the High Line, Phase 3 are the Pershing Square Beams; Interim Walkway; and the CSX Transportation Gate. See a map and these Park features in detail at Friends of the High Line.

“The opening of the High Line at the Rail Yards completes the northernmost phase of the park, connecting Gansevoort Street to 34th Street. Unlike the High Line to the south, this section features a simple path through the existing self-seeded plantings. The design celebrates the iconic urban landscape that emerged after the trains stopped running and highlights the expansive views of the Hudson River to the west and the City to the east” ~ High Line Interim Walkway sign.

The emphasis of Phase 3 evokes the feel of the original overgrown elevated railroad trestle, offering amazing views of the Hudson River and immersing the visitor’s experience firmly within the immediate sights and sounds of ever-evolving Manhattan.

“Just as with earlier sections of the High Line, the views walking in one direction are quite different from those experienced walking in the other direction. It’s a striking experience to walk northward near the end of the second phase and then turn sharply left (westward) as one approaches the beginning of the third phase with views abounding of the Hudson Yards under construction and the vast rail yards in the distance. I don’t think New Yorkers have ever seen previously such a striking view of the infrastructure of their own city.

The Spur at 30th St. & 10th Ave. was the last section of the original rail to be turned into public space and opened on June 5, 2019. Home to the Coach Passage, a large open-air gathering space, and the High Line Plinth, the Spur is a dedicated site for monumental artworks.