Matthew Ponsford of The Guardian writes:

The first proposals for a spate of developments designed to meet new green measures in London include a biodiverse training complex at the All England Lawn Tennis Club in Wimbledon, a green-walled skyscraper in the City of London and a densely planted mini forest in Chelsea.

Skyscrapers, historic estates and suburban parks across the capital are counting up scores for greenery under new planning metrics set out in Mayor Sadiq Khan’s London Plan, which are intended to enhance developments’ contribution to the environment.

The Urban Greening Factor (UGF) formula, inspired by the Swedish city of Malmö’s “green points” system, scores each part of a development’s plan – including street-level areas, balconies and roofs – from 0 to 1, with trees, planters and green roofs earning high scores, while paving slabs and barren rooftops receive no score. Central government has also set out plans in the Environment Act 2021 to make developments deliver an uplift to biodiversity, which will require a 10% “biodiversity net gain”.

Green space factor – how does it work?

The green space factor (GSF) – sometimes called an urban greening factor or green area factor – is a way of calculating green space requirements for new developments. GSF measures typically give each square metre of tarmacked car park a score of zero and every square metre left as open meadow a value of one. Other spaces can earn higher or lower scores. In Malmö, a pond or stormwater system filled with water for more than half the year also scores one, a permeable gravel area with some plants has a value of 0.4, and paved areas designed to channel stormwater into sustainable drainage systems score 0.2. These numbers are added up and divided by the total area of the development to give a score. Cities may demand that each development reaches a minimum target, typically 0.3.

“The Urban Greening Factor is a complete step-change in how much green stuff we’re putting on buildings,” said Craig Robertson, head of sustainability at AHMM architects. Even city centre sites will be tasked with achieving a UGF score of 0.4, equivalent to turning 40% of their footprints over to nature. Biodiversity net gain will mark another big shift, Robertson added, pushing developers to consider vegetation and ecological benefits to their surroundings. “It’s really difficult – in a positive way. It’s a really positive challenge to have.” 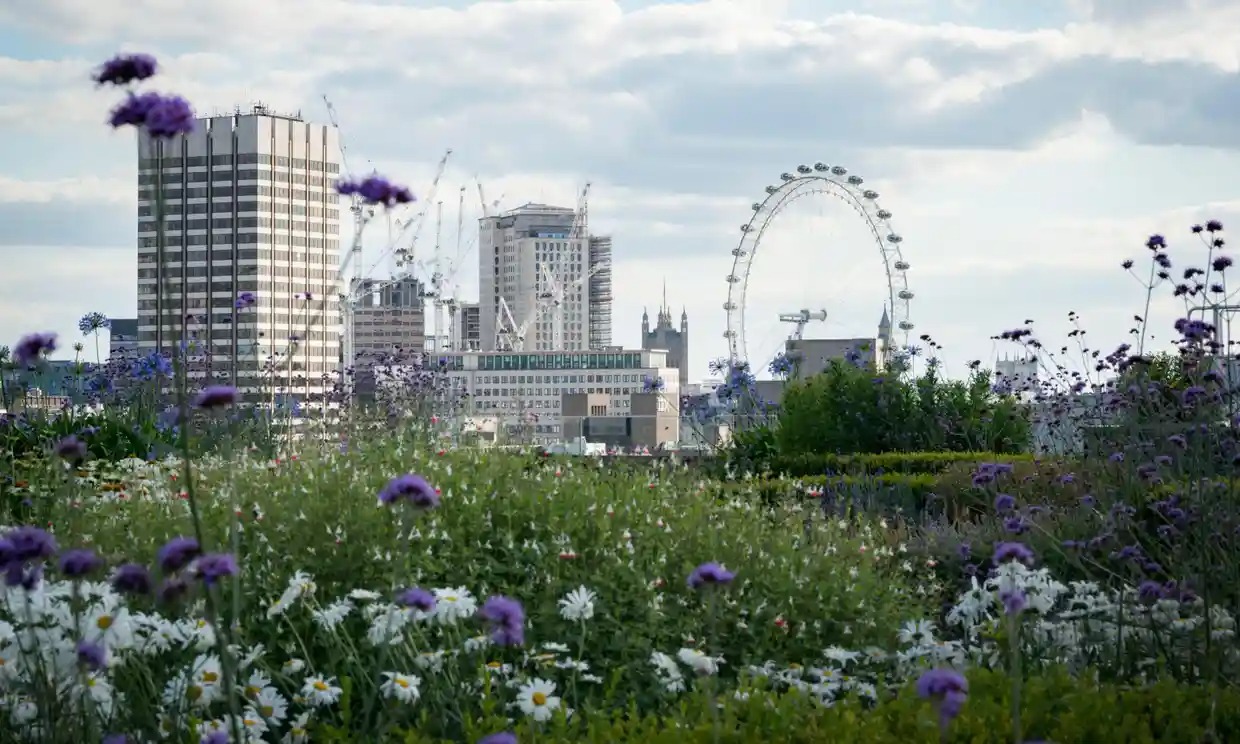 The Urban Greening Factor incentivises developers to look at ways to create green spaces, such as this roof garden on the top of the Hachette building overlooking the Thames. Photograph: Diana Jarvis/Alamy

Vanessa Ross, founder of Arc Landscape Design and Planning, said it remains up to developers, designers and ecologists whether the new metrics will truly make a difference to lives and ecosystems in London, or simply push architects into “designing by numbers”. For example, private gardens can score highly for green space but offer little benefit to people unless accessible, Ross added.