The solution to keeping cities cool and weatherproofing them for safer summers may be holistically investing in better, or smarter, surfaces. According to a recently released report from the Smart Surfaces Coalition, cities can mitigate the “heat island” effect by turning dark roads and parking lots into reflective surfaces, utilizing solar panels and green roofs, changing sidewalks to stop stormwater runoff and flooding, and even planting more trees.

More and more cities are becoming intolerably hot in the summer, and in the coming years are increasingly at risk of becoming unlivable due to more extreme summer temperatures. This is in large part because most cities have been covered with dark, heat-absorbing, impervious surfaces, such as asphalt parking lots and dark roofs, resulting in higher peak temperatures, higher energy bills, worsened flooding, and increased air pollution. Summers are now commonly 9°F hotter in cities than the surrounding countryside, an effect commonly referred to as the urban heat island. The impact is usually even worse in lower-income neighborhoods, which generally have even fewer trees and darker surfaces, with temperatures often 10°F hotter than wealthy neighborhoods with more trees. 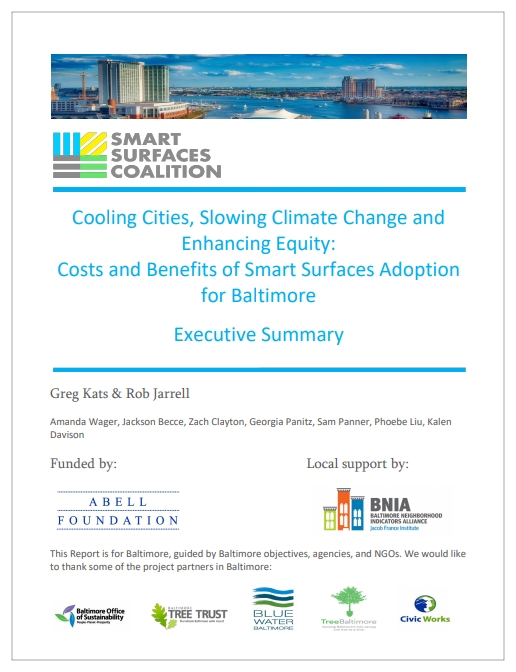 Climate change is making cities even hotter. Under current projections, many cities will experience a tripling of extremely hot summer days by 2050. A National Academy of Sciences report warns that the mean human-experienced temperature rise by 2070 will amount to an estimated 13° Fahrenheit. And it warns that “in the absence of migration, by 2070 one third of the global population is projected to experience [summer heat of] 29 °C, currently found in only 0.8% of the Earth’s land surface, mostly concentrated in the Sahara.”

The National Academy of Sciences report goes on to warn that more than a billion people may have to migrate to avoid overheating. A recent Australian Institute report estimates that a billion people could be displaced by climate and weather disasters by 2050. Unless city policies and the pace of global warming change, many cities will become too hot in the summer for humans to survive for prolonged periods outside—or in buildings without adequate air conditioning.

The recent surges in extreme heat in traditionally cool places Seattle, Portland and much of Canada has led to hundreds of excess heat deaths in a few days and a rush to buy air conditioners where air conditioning (AC) has historically never been needed. This surge in urban AC demand raises the terrifying threat of an urban accelerating heat loop that will make urban heating and climate change even worse.

To avoid this nightmare scenario, cities must make themselves cooler, and global warming must be slowed. The only strategy available that both cools cities and slows global warming is adoption of Smart Surfaces—surfaces that are reflective, porous and green (such as cool or green roofs or reflective parking lots) along with trees and solar photovoltaic panels (PV). It is therefore important to understand the potential and cost-effectiveness of Smart Surfaces for cooling cities and slowing global warming.

To avoid this nightmare scenario, cities must make themselves cooler, and global warming must be slowed. The only strategy available that both cools cities and slows global warming is adoption of Smart Surfaces—surfaces that are reflective, porous and green (such as cool or green roofs or reflective parking lots) along with trees and solar photovoltaic panels (PV). It is therefore important to understand the potential and cost-effectiveness of Smart Surfaces for cooling cities and slowing global warming.

If AC does increase as projected (from 1.6 billion units now to about 5.6 billion units globally by 2050), this would increase warming by 0.5°C just from increased electricity use. But the climate impact would be much larger, as AC units use and leak greenhouse gasses that are potent accelerants of global warming. Large increases in air conditioners would also mean more AC heat dumped outside onto streets, potentially increasing city temperatures by an additional 2°F, further increasing air conditioning loads. And in multi-storied building, dumped heat from operating AC units preheats air drawn in by air conditioners units above, making them less efficient and in turn requiring more AC units operating at fuller capacity more of the time, in turn increasing heat rejection outside. Unfortunately, this self- reinforcing urban overheating is the future of business as usual.

In this report, we have expanded the technical depth of analysis from these prior reports. We analyze and model in detail the economic costs and benefits, as well as temperature reduction impact, of one city—Baltimore—adopting Smart Surfaces.

With a population of 610,000, Baltimore is a mid-sized city located in an average urban climactic zone. Like most cities, Baltimore is experiencing increasingly hot summers and is suffering from the effects of climate change. Also like most cities, Baltimore’s wealthier neighborhoods have more trees and are cooler in the summer than low-income neighborhoods and communities of color. Baltimore serves as a representative city where policies around mitigating heat and climate change can hold vital lessons for cities globally on how to survive and even thrive in a world characterized by climate change and increasingly extreme summer heat.