Traditionally given over to ventilation shafts or solar panels, today’s rooftops are increasingly becoming green spaces as part of a drive towards cleaner cities.

Take a bird’s eye tour of many of the world’s well-known cities and there’s one noticeable feature they have in common: a growing number of green roofs.

Toronto, for example, introduced laws for new buildings or extensions greater than 21,000 square feet back in 2009. Since then, developers have had to cover between 20 and 60 percent of their buildings with vegetation – and while they can opt out for a fee, fewer than 10 percent choose to do so, according to data from Toronto’s City Hall.

Other cities have opted for more flexibility. In San Francisco, 15 to 30 percent of roof space on new buildings must incorporate solar panels, green roofs or both.

“Local government policy has and continues to be the major gamechanger as more cities aim to improve air quality, protect against flooding and heat stress during heatwaves, and build nature back into the urban environment”
Isabel Scruby, Planning, Development & Heritage consultant at JLL

It’s a far cry from when green roofs first appeared 50 years ago when it was often charities or housing cooperatives leading the charge in German cities such as Düsseldorf and Stuttgart, today considered Europe’s green roof capital.

Driving a greener future
Today, there are often financial incentives for going green. In Hamburg, green roofing measures for both residential and commercial buildings are subsidised with up to €50,000 via the Hamburg IFB bank. In America, Washington DC’s storm water regulations and Philadelphia’s tax credit scheme both encourage green roofs. In London, there are no such incentives. However, it’s now home to some 42 percent of the UK’s overall green roof space, in part through residential schemes such as Barnet’s Collingdale Gardens and Islington Square.

“Since 2008, there has been a clear drive in the uptake of urban greenery in London – specifically living walls and green roofs – as part of the Living Roofs and Walls Policy,” says Scruby. The challenge is for those areas where there are low levels of greenery to improve, says Erin Williams, consultant in JLL’s Upstream Sustainability Services team. “That will require more developers and existing real estate owners to embrace to the idea.”

While there are certainly practical issues to overcome, from transporting materials onto the roofs to ongoing irrigation and stormwater management, there are also benefits for investors and tenants. “Developers or redevelopers sometimes need convincing of the benefits of a green roof on a property’s long-term value and energy efficiency,” says Williams. While utility costs vary between cities, the National Research Council of Canada estimates a green roof can reduce air-conditioning use by up to 75 percent.

And comparing the expected cost of a conventional roof with the cost of a 21,000 square-foot green roof, a 2006 study from the University of Michigan found that over its lifetime, a green roof would save about $200,000, with almost two-thirds of that in energy.

Appealing to modern tenants
While green rooftop space can be left vacant or landscaped for recreational use to help improve health and wellbeing among building tenants, some rooftops are going down a different route. 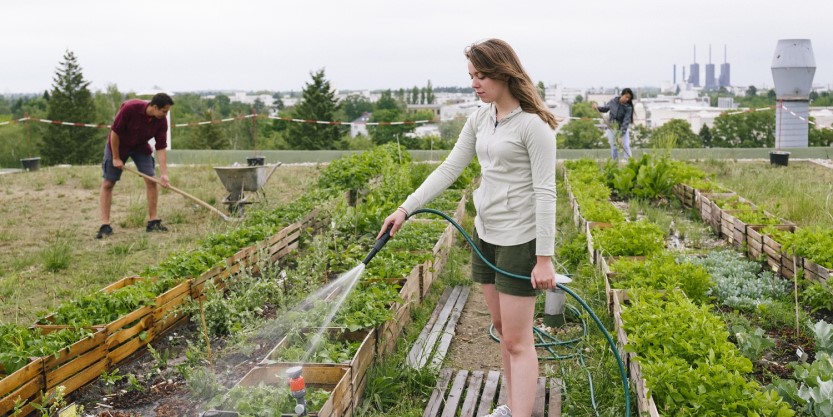 In Exeter, the Crown Estate’s Princesshay rooftop garden, which includes five hives, fruit trees and a herb garden, is home to around 100,000 bees. Since launching in 2012, honey is sold in a delicatessen below. “Using green roofs to grow fruit and vegetables is a great opportunity to move rooftops away from purely recreational use and drive more value from them while also benefiting the local community and wildlife,” Williams says. It’s a model that property owner YKK has implemented in Hong Kong to create a 9,000 square foot urban farm producing organic vegetables that are donated to local charities to help feed people in need.

“We’ve turned the building’s under-utilised space into a vibrant place where our tenants volunteer to help cultivate the plants,” says Sotomi Funasugi, director and factory manager at YKK (HK) Limited. “It not only allows tenants to relax and socialise, but it also strengthens bonds with the community by supporting local charities and helping schoolchildren to learn about growing vegetables.”

While the number of green rooftops – and their range of uses – continues to grow, Williams says there’s room for the concept to grow further, pointing to Paris’ plans to make its rooftops a key part of its green transformation. “As planning policy filters through and has a greater impact on developer thinking, there’s a strong possibility adding a green roof simply becomes part of planning applications,” Scruby says. “That’s the hope. We’re not there yet – but progress has been made.”

Read more: Why green rooftops are sprouting around the world