I think most of us GRPs hunker down for the winter. This year was looking like the typical winter until I got a phone call about a project I’d bid months back. It was a small residential green roof project that had a steep 5/12 slope in sunny Carpinteria, California.

Initially, I was excited, for several reasons: What Midwesterner wouldn’t jump at the chance to escape the winter in St. Louis for a few days in the sun? Also, because I’ve been trying to cultivate more business on the west coast since much of our business has been along the east coast. 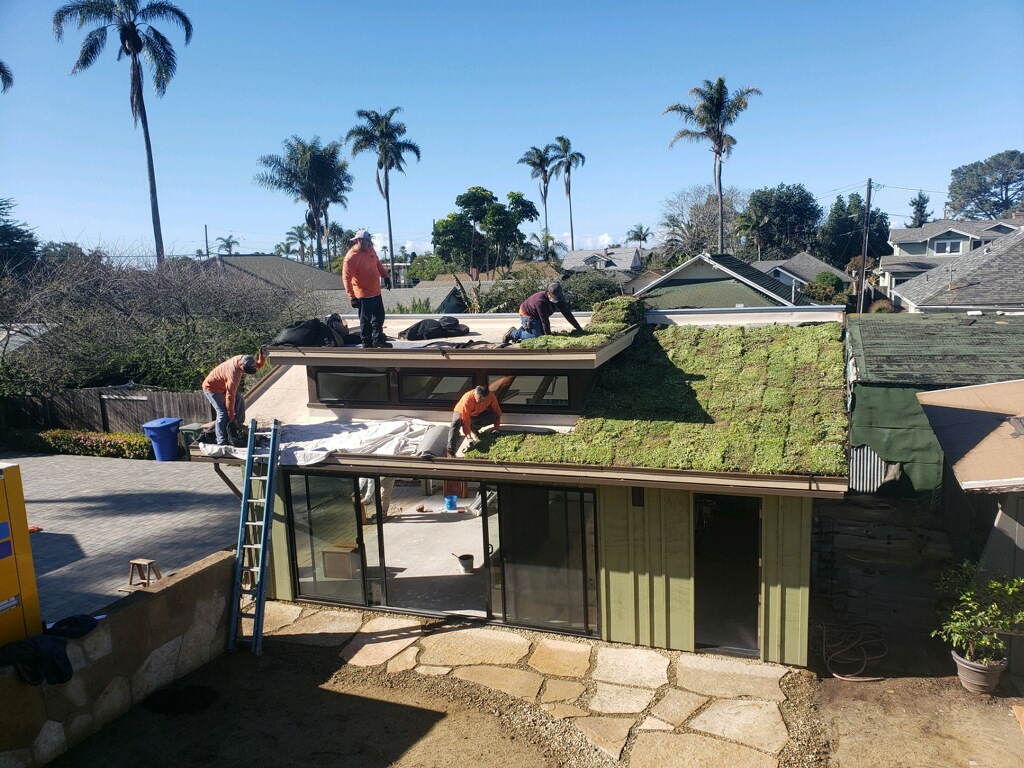 We at Green Roof Blocks have an established supply chain and reliable partners that have made bringing materials into Manhattan, for example, routine. The west coast, however, has been more of a challenge. One primary impediment is the tight agricultural controls California enforces at the border – the plant material has to be sourced in California.

We have been using Sempergreen almost exclusively for our sedum mats, but they are located in Virginia and shipping to the west coast is cost prohibitive. Oscar Warmerdam, President of Sempergreen USA, put me in touch with the folks at Rana Creek in Carmel, near San Francisco. It took some coordination selecting the plant species and it took about 3 months for them to produce the 400 square feet of sedum tiles required for this project, to be planted on top of our newly redesigned Green Paks.

Each 24” x 24” Green Pak is a completely self-contained module made of a long-lasting, unique knitted high density polyethylene. The top face is made of biodegradable burlap, which decomposes into nutrients.

Route of the Green Paks

The empty Green Paks are shipped from China and stored at our east coast blender, McEnroe Organic Farms in Millerton, New York. By the time we got the Paks shipped to our Midwest blender, Oldcastle Landscape Supply, and got the soil blended and the Paks filled to four inches thick with our proprietary growth media, the coronavirus pandemic was starting to really spool up. 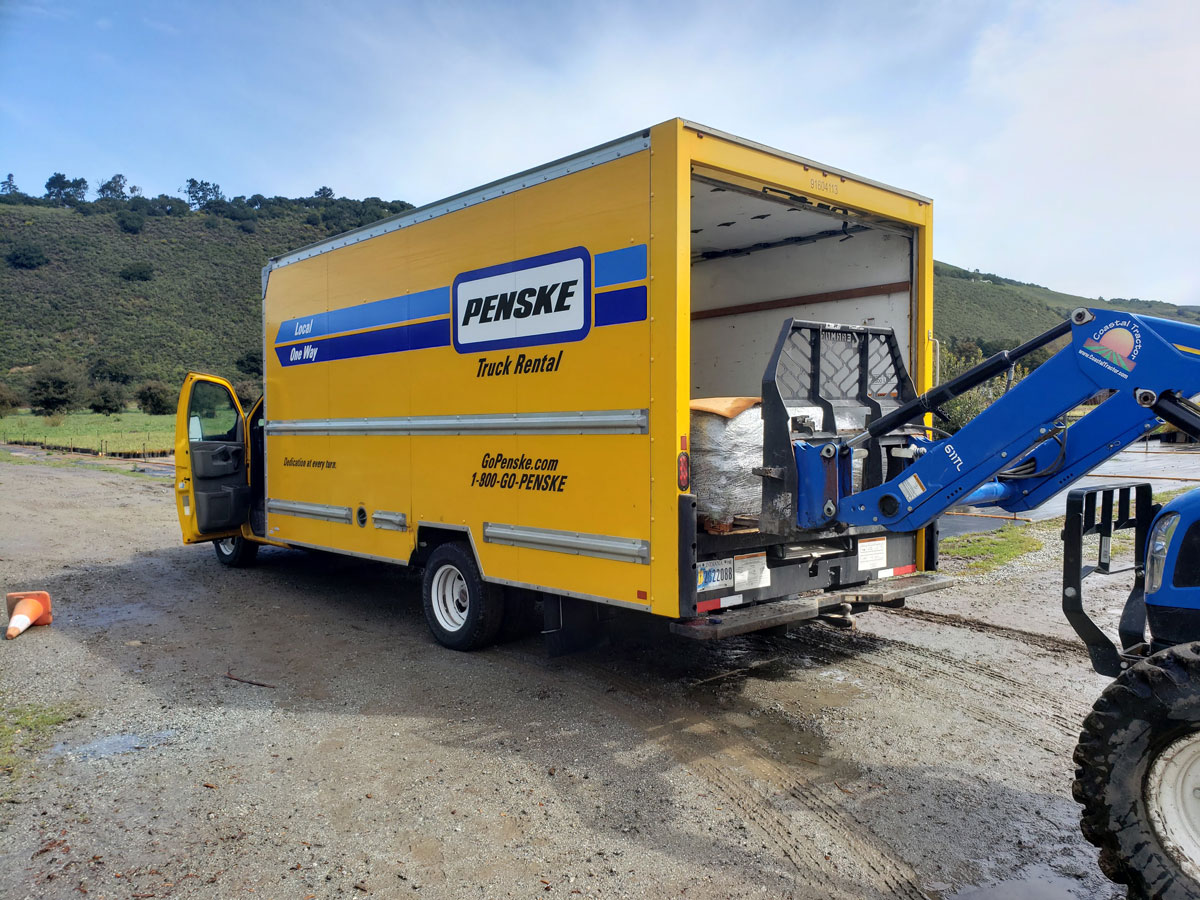 In mid March I rented a Penske truck and set out west with the filled Paks for California. My wife sent me off with surgical gloves, hand sanitizer, and a canister of disinfectant wipes. She also sent me with enough food for a week. I wiped down every gas pump I used all the way to California. I touched nothing. I ate my own food, and I wiped down every surface I touched in each of the hotel rooms I stayed in.

The first day of the drive was uneventful. I made it to Denver and stopped for the night. The next morning, I started up the mountain. 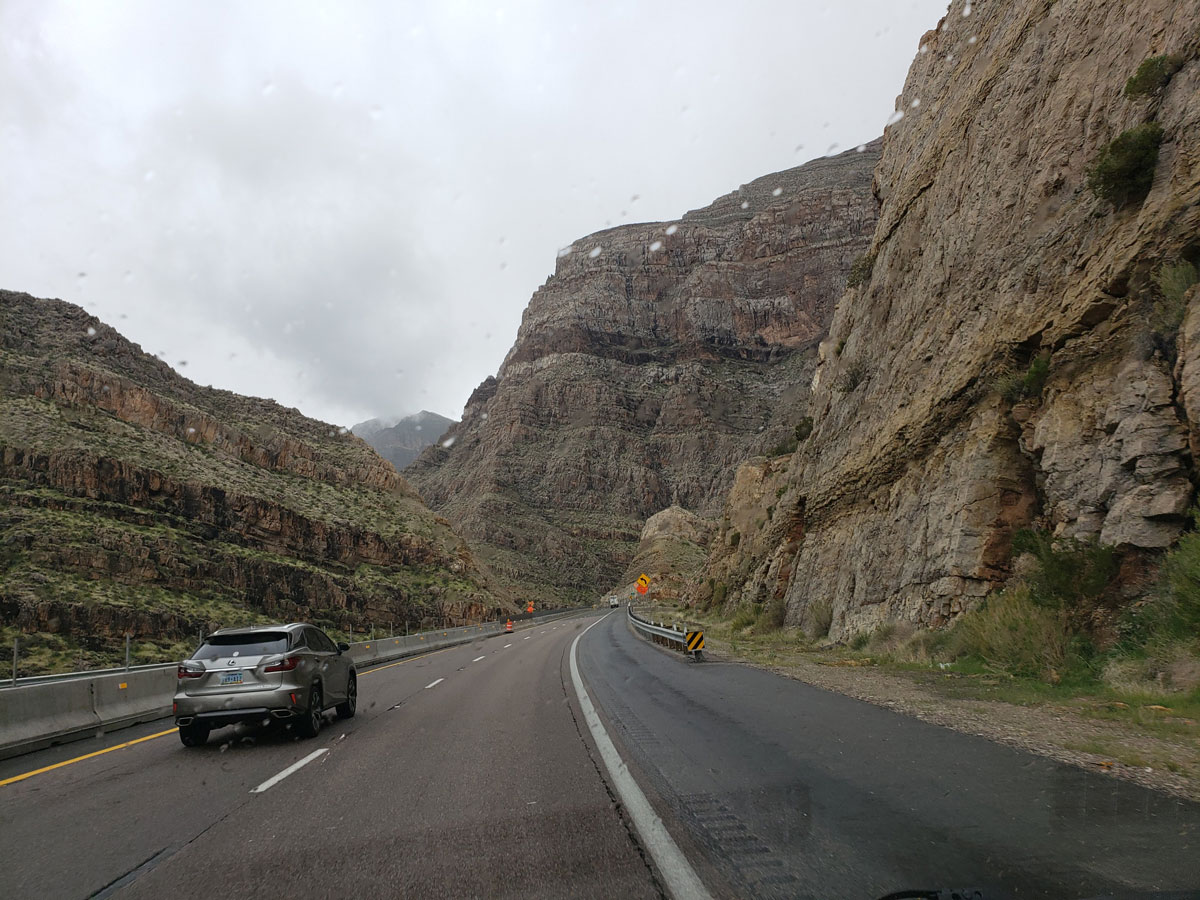 The rain was just beginning to fall. Image: Kelly Luckett

As I drove higher up the mountain, the rain turned to sleet, then to snow. There were flashing signs about traction laws and information signs displaying a message stating chain laws were being enforced, and signs about chain stations ahead. I thought to myself I’d better stop at the chain station and buy some chains.

The snow was really starting to pile up and it was difficult to steer so I pulled off the road into the chain station and pulled up behind a few trucks. The drivers were out installing snow chains on their drive tires. I got out and went to talk to one. He warned me that the police would fine me $1500 for not having snow chains. I eased my way to the next exit, turned around, and headed back to Denver. I found an AutoZone and purchased a couple of sets of snow chains. 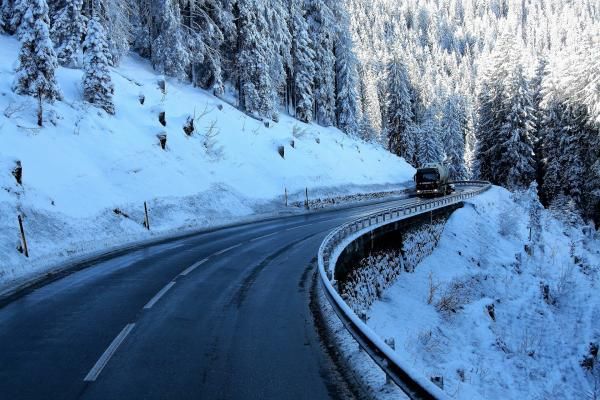 The Green Roof Guy has never laid eyes on a snow chain before, so I was clueless how they went on. I paid the kids at AutoZone $20 to take a shot at putting them on for me. They got one set on the outside tires of the tandem axle tires and I set out. As I pulled onto the on ramp and started back onto highway 70, I heard the driver side chain smacking the truck.

By the time I pulled over, the passenger side broke too. There was about three inches of slush on the ground and water was rushing down the on ramp. The chain was wrapped around the axle and stuck between the tandem wheels. I struggled with it for a while squatting, attempting to stay on my feet. After about fifteen minutes of this I had to admit defeat and lie down in the flowing water. From this angle I was able to see that the chain was hooked on the valve stem and all the pulling in the world would not have freed it.

I managed to get it freed and pulled the mangled chain out. Standing there, soaking wet and freezing, I had to make a decision: I decided to take my chances without snow chains.

I got in the truck, cranked up the heat and continued up the mountain. By now the snowplows were running and I just took it slow and easy. I wanted to get off the road around 10:00 pm, but the snow squalls were so heavy at times I simply could not see out of the windshield. I was driving 10 MPH keeping the truck on the road by looking out the side window through which I could see the road markers along the side of the highway. That went on for about thirty white knuckling minutes. When finally, I got to the next exit, I pulled off and got a hotel room. I wondered if I had made the right call as the snow had slowed a bit as I was pulling into the hotel parking lot.

I think most of us GRPs hunker down for the winter. This year was looking like the typical winter until I got a phone call about a project I’d bid months back. What Midwesterner wouldn’t jump at the chance to escape the winter in St. Louis for a few days in the sun?

Once settled in the room I sipped a beer and watched out the window as it started picking up again. Before long, it was a total white out. I smiled and arranged my wet shoes on the heater hoping they’d dry by morning. I set out early, crossed into California and made it to Rana Creek around 10:30 the next morning. The young worker loaded two pallets of sedum tiles on my truck and I headed south for Carpinteria. I got checked in the Best Western in the charming little beach community. The gentleman at the front desk told me I was one of six guests in the entire hotel. Social distancing wouldn’t be a problem.

I needed a few things for the install, so I walked to the lumber yard. There were a few people out but most of the stores were closed. A few restaurants were selling takeout and the gas station was open, but the shelves were almost bare. I was hoping to buy some sodas. Then I remembered the vending machines in the hotel. I scored some ones from the front desk and raided the vending for Diet Dr Peppers, Pop Tarts, and a Snickers bar.

The trip had taken a day longer than I expected. I had to reschedule the crew several times, and it was now Saturday afternoon. I spoke with the crew foreman about possibly installing the green roof on Sunday, but the crew wished to spend Sunday during these troubling times with their families. I completely understood. Truth be told, I was beat up from the drive and a down day sounded pretty good. It was going to feel good to sleep in.

I walked to the job where I found the homeowners sheltering in place. This is their vacation home and when the California Governor put the lock down on, they were stuck. I was a little uneasy about going ahead with the install as I’m fairly certain green roof installations are not “essential services.” However, I drove this stuff across the country and I wanted to go home, so I was considering it essential. 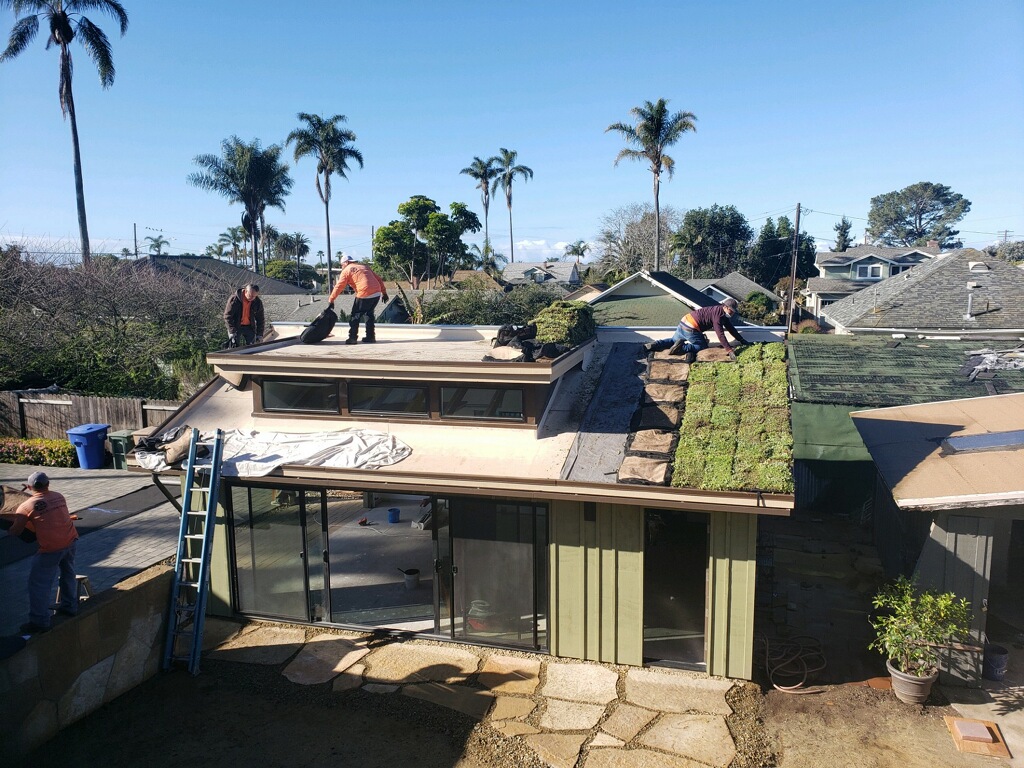 I met the crew at 8:30 am on Monday the next day, and they were all happy to have work and to get out of the house. I cut the first course of drain core with root barrier and showed them how to place the Green Paks, then showed them how to place the sedum tiles on top. They picked it up quickly and asked me to let them do it. I got out of their way and watched from the ground.

By noon, the green roof was finished, the grounds were immaculate, and the truck was swept clean and ready to return. I didn’t want them to have to deal with a check from St. Louis, so I brought them cash. They were very appreciative, as was I for their help. We bumped elbows, and I returned to my hotel, schlepping all of my belongings with me. The Penske truck rental was across the street; I turned the truck in and headed for one more hotel stay by LAX. 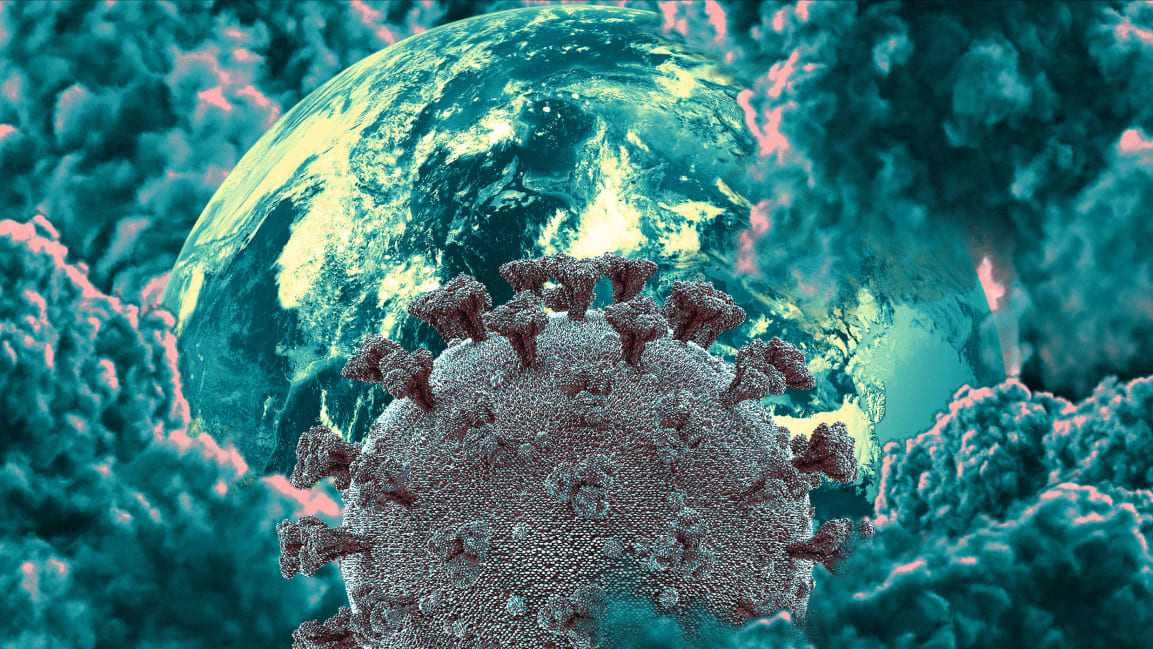 I settled in my room to reflect on the week. I knew when I started out it was going to be a difficult endeavor. The distance, the roof slope, the pandemic; none were small hurdles. I finished most of my food and polished off the beer I’d brought.

The customer was ecstatic with the job, I now had established a relationship with a west coast sedum mat producer, and I had a trained crew in LA. It was a good feeling, but I wasn’t out of the woods yet. I still had to get home. 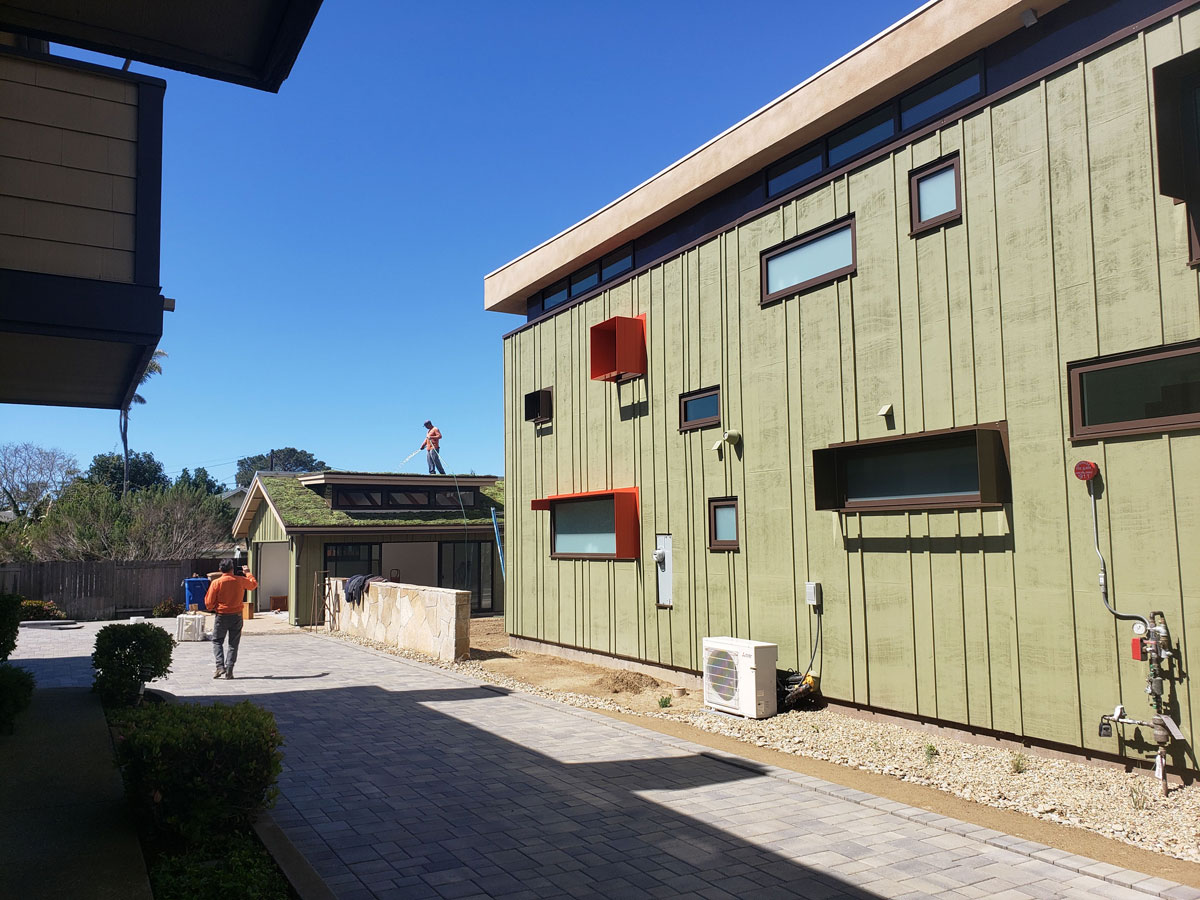 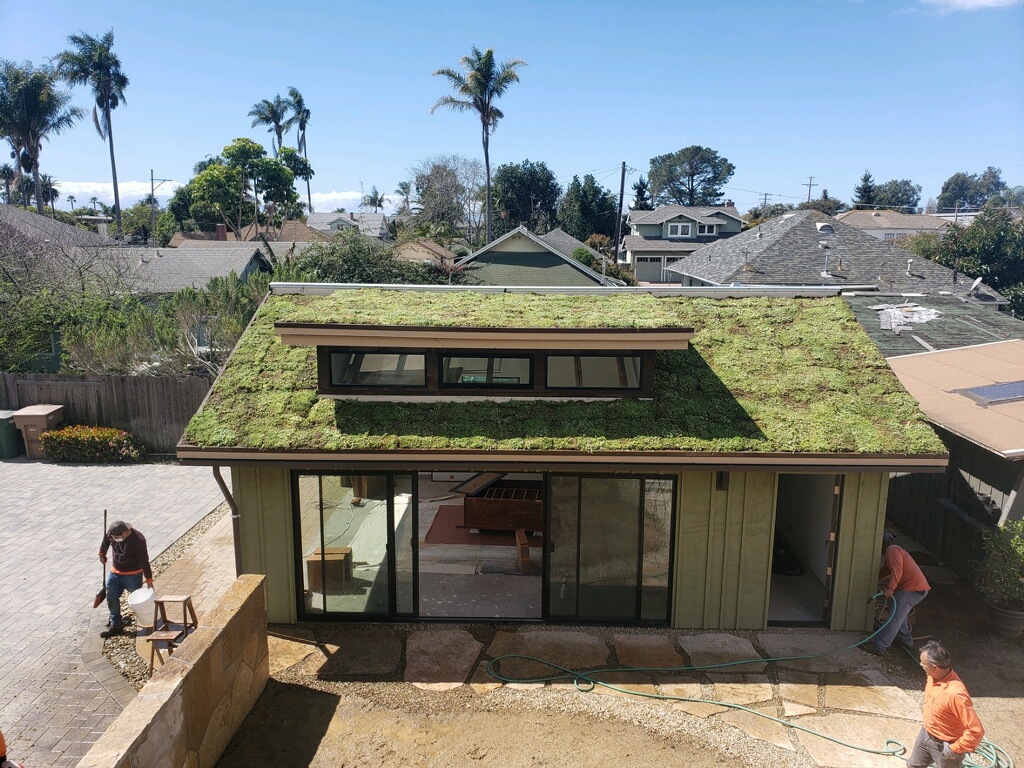 Years ago, I needed a mask for some dusty work I was doing. I remember standing at Lowe’s looking at the options and selecting the sturdier looking face mask. I’m not even sure why I still have it. Turns out, it is one of the coveted N95 face masks.

I woke early the next morning, donned my mask and rubber gloves, and got my two bags loaded in the hotel’s airport shuttle. I kept my distance from everyone. I wiped down the chair at the gate and the entire row in the plane. My friend helped my wife get my car to the airport so no one had to come in contact with me to get me home from the airport. 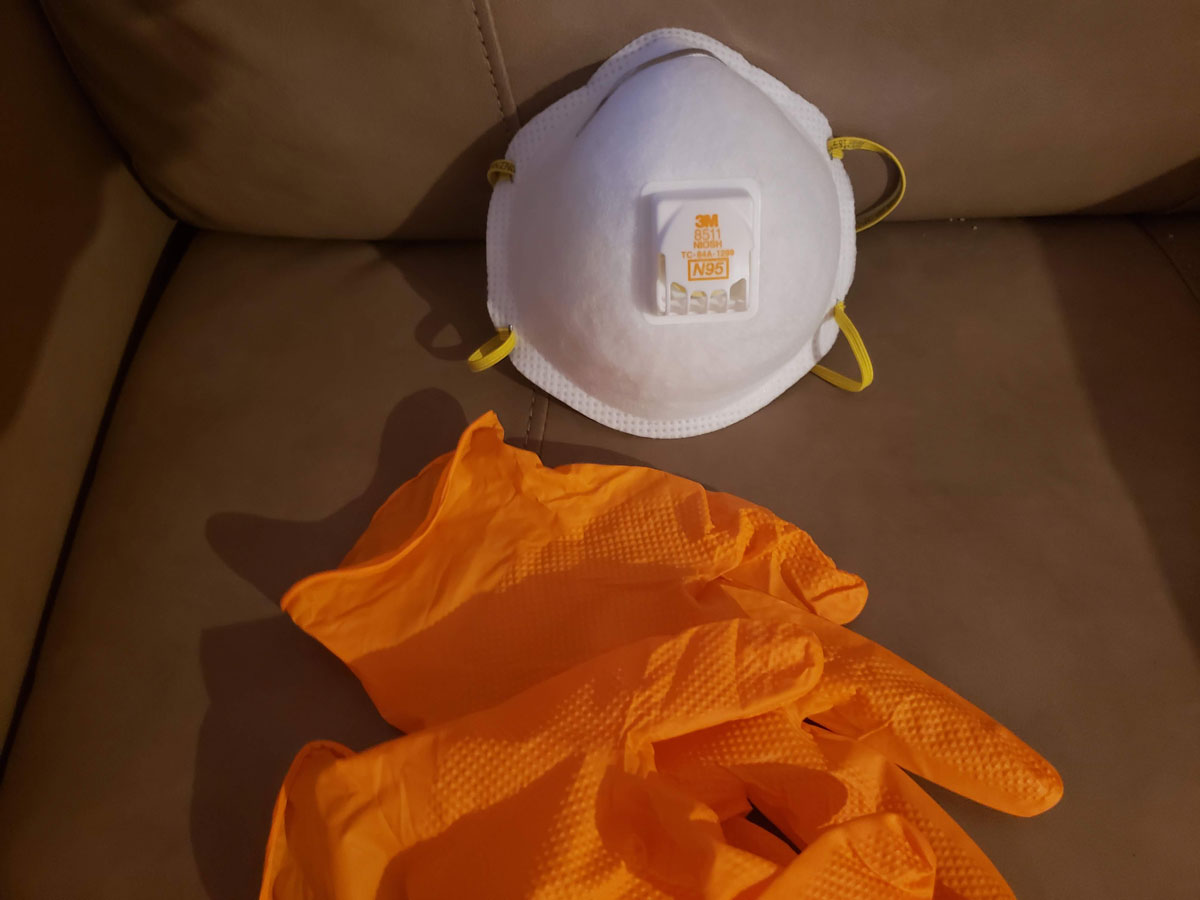 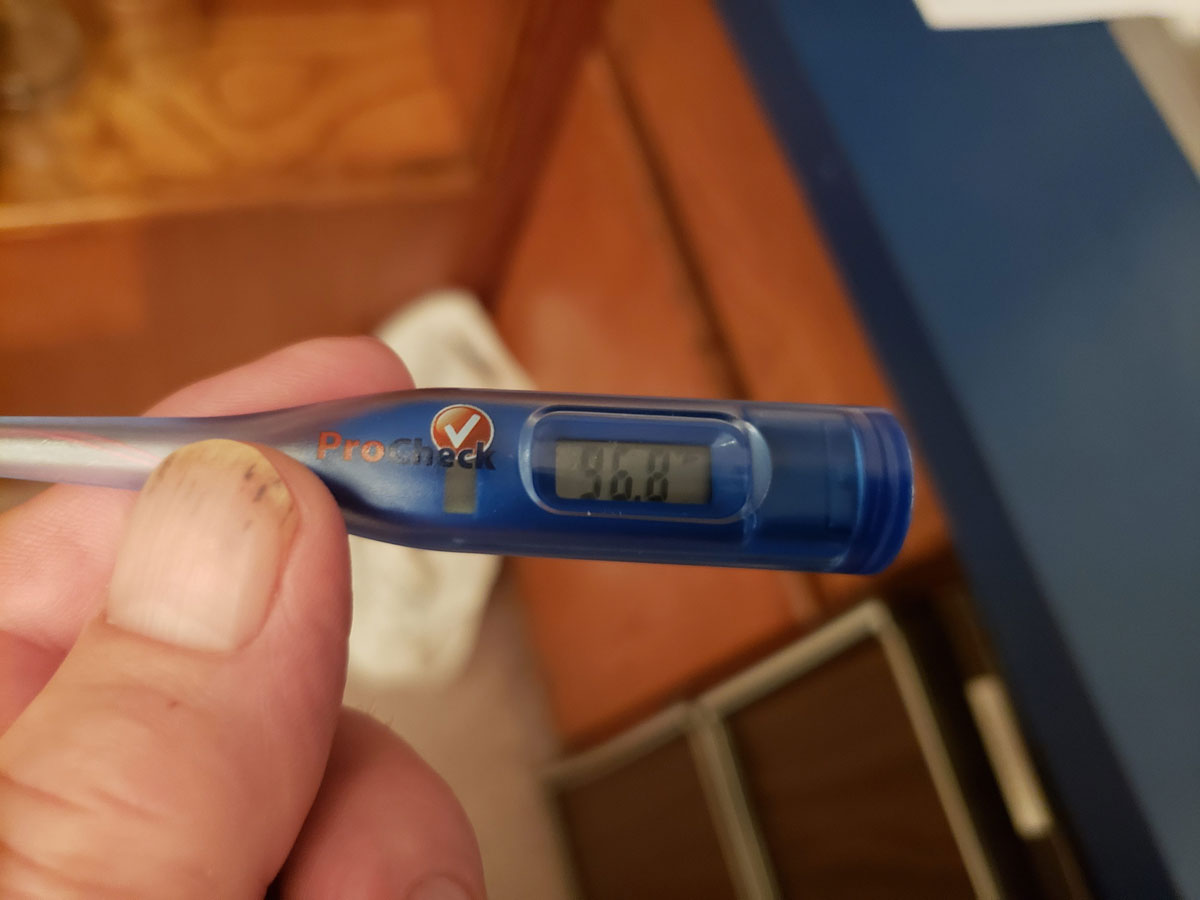 I drove home where my wife had the basement ready for my 14 day quarantine period. I monitored my temperature for the next two weeks. I never got any symptoms. I got to rejoin my wife in the house just over a week ago where, like you all, we’ll be sheltering in place until we all get past this.

From my family to yours, Green Roof Fans, stay home and stay well. 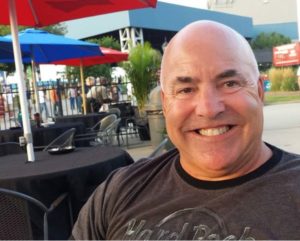 Kelly designed, patented, and introduced the Green Wall Blocks vegetated retaining wall system. Kelly has been a contributing editor on Greenroofs.com (2005); he is The Green Roof Guy who shares his travels attending ASTM, GRHC and other roofing and greenroof related organization meetings. In 2010, Kelly received the Green Roofs for Healthy Cities Civic Award of Excellence.

Kelly Luckett’s latest book is a novel entitled Death and Humanity – Neck and Neck Down the Stretch: The Race Against Pandemic (Kindle Edition), 2020 available from Amazon. 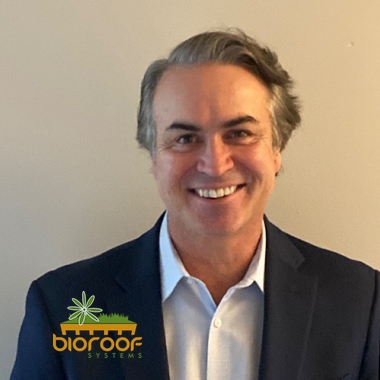 Featured Projects
Video & Project of the Week for September 21, 2015: The Empire State Building

Featured Projects
Greenroof Project of the Week for September 30, 2013: The Empire State Building 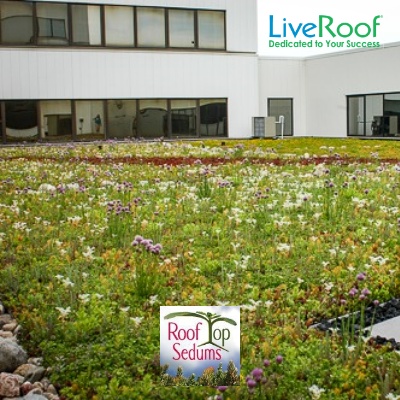