Have you seen this challenge from Green Roofs for Healthy Cities yet?  Sounds like they’re throwing down the gauntlet for the City of New York to step up their greening efforts!

New York is already a city with many, many living architecture projects – in fact, we highlighted this fantastic metropolis in our Greenroofs.com 2014 Top 10 List of Hot Trends in Greenroof & Greenwall Design in the #3 category: The Green Apple: New York City

But GRHC believes the city that never sleeps can do better!  Read on from their recent News Release:

Building 3 Million square feet of Green Roofs in New York yields over $95 million in public benefits over a 25 year period including over 4,000 new jobs in construction and maintenance!

New York, NY – Tuesday September 29, 2015 – With just one week to go before 2015 CitiesAlive Green Roof and Wall Conference Oct. 5-8, 2015 in Brooklyn, Green Roofs for Healthy Cities (GRHC), the green roof and wall industry association issued a challenge to New York today, calling upon them to work together to implement more than 3 million square feet of green roof each year starting in 2016. www.citiesalive.org

“New York City is in fifth place for the number of green roofs installed after much smaller cities like Washington, Chicago and Philadelphia. We are issuing a challenge to New York policy makers, developers, designers and building owners to contribute to the goal of 1 billion square feet of green roofs installed in North America by 2022 – that amounts to just over 3 million square feet installed each year!” said Steven W. Peck, GRP, Founder and President of Green Roofs for Healthy Cities. 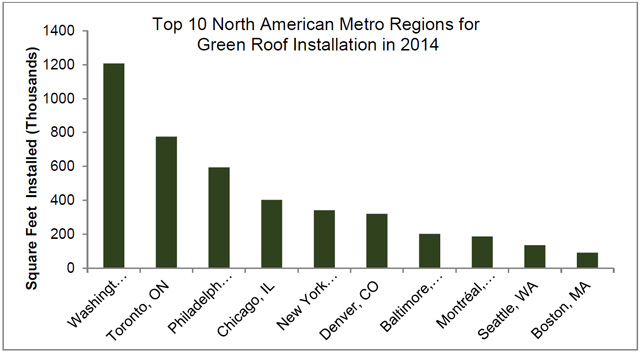 “New York has incredible potential to improve the quality of life in the city by utilizing the miles and miles of rooftops to provide amenity spaces to recreate, grow food and get in touch with nature,” said Mark Morrison, CitiesAlive Conference Co-Chair and Principal, MKM Landscape Architects. “With the right types of policies in place, many building owners would leap at the opportunity to turn their barren rooftops and walls into a private or public oasis,” he added.

While important progress has been made in New York, there is considerable room to utilize green roofs and walls to fight climate change, create jobs and improve equity and social justice across the Five Boroughs. For example, industry leaders in New York have been calling on local and state policy makers to:

“We are at a critical juncture as a city, with rents increasing faster than wages; environmental catastrophes such as floods threatening the city’s livelihood; high rates of asthma, obesity and hunger; and increasing divisions between the haves and have-nots. The benefits of green infrastructure to New York City are well documented: green infrastructure reduces energy demand, mitigates flooding, improves housing quality, air quality and public health and supports urban agriculture. For New Yorkers, the choice is ours whether we embrace green infrastructure as a critical solution to our environmental and societal challenges, or whether this technology remains underutilized,” said Rob Crauderueff, Co-Chair of CitiesAlive Legacy Committee and CEO of Crauderueff & Associates.

The Green Infrastructure Design Charrette in Harlem on Thursday, October 8 will bring together local and international designers to help to demonstrate the potential of deep green design and implementation in a 10 block area of central Harlem. The designers will focus on how many jobs can be created, for example, through the use of roofs for food production on buildings owned by the Canaan Baptist Church, a partner in the Charrette.

See the full list of 2015 CitiesAlive Green Roof and Wall Conference speakers and activities, and register now at www.citiesalive.org.

Perhaps the Big Apple will eventually be known as the Big Green Apple, but regardless, we send kudos to all of the New York City city officials, designers, developers, and researchers who have done so wonderfully so far!

See you in a few days in Brooklyn?