As you know by now, ESRI Canada’s Garden in the Sky  in Toronto, Canada  is the winner in our  first contest here at Greenroofs.com, the 2010 Love the Earth, Plant a Roof!  Earth Day Photo Contest, and was featured as our Greenroof Project of the Week (GPW) from May 2, 2010 through May 9, 2010.   Submitted by Josephine Chan, Public Relations Specialist, Marketing, with ESRI Canada, this project received a whopping 735 votes!   Well, Josephine is a marketing specialist and  should be  commended on doing a great job of  getting the word out to vote for her project!

Although this really was a popularity contest, nonetheless, this “Garden in the Sky” is a stunning example of  collaboration, resulting in a thoughtful,  peaceful, and inviting  greenspace in an otherwise dreary, hot urban roofscape canyon typically found in our core downtown areas.   I asked Josephine why she felt the ESRI Canada living roof was special:

“The green roof is a great project because it provides access to nature in an urban environment.   It reflects the passion for the environment and collective creativity of ESRI Canada’s staff, who were consulted and encouraged to submit suggestions for the design of the green roof.   The result is a colorful, accessible and functional rooftop garden that significantly enhances our workplace and the environment.”  ~ Josephine Chan

“We’re an environmental company.   Our business is building geographic information systems for our customers.   We wanted to set an example of what a company could do, for a relatively small amount of money overall, at improving the sustainability of our surrounding environment.” ~ Alex Miller

The greenroof was designed by Scott Torrance Landscape Architect of Toronto, who also  conducted  a Green Roof Feasibility Study for the ESRI Canada Head Office in 2007.    The design encompasses several zones of outdoor rooms  for circulation purposes,  and also reflects the indoor plan. 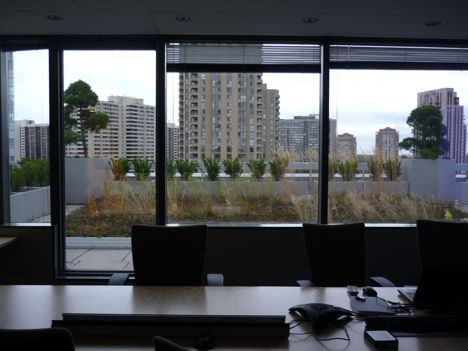 The project  was  installed and is maintained by Gardens in the Sky, Flynn Canada.   Not including the planters, the 7,500 sf  installation is a pre-vegetated LiveRoof  Hybrid  greenroof system combining 4″ LiveRoof Standard and 6″ LiveRoof Deep modules.    Josephine told us about several challenges that  were encountered during the design and implementation of the roof garden.  The first step was convincing the landlord, Crown Property Management, that it was an idea worth pursuing.

“Fortunately, they are committed to making their buildings more energy efficient and sustainable.   They agreed that a green roof would be a valuable enhancement and covered the cost of re-roofing the structure on which the garden would be laid.  Capital costs for the green roof were in the range of $25 to $35 per square foot.   The investment the company allocated for the project was substantial.   However, it knew the benefits would far outweigh the costs and proceeded with the project despite the severe economic downturn.”

ESRI Canada faced other challenges such as winds, loading capacity and logistics for a project located in a busy commercial area of east Toronto, and shares the following items that needed to be addressed:

“Wind velocity, particularly nine stories above ground, needed to be factored into plant selection and installation.   An 85-ton crane was used to lift a total weight of 260,000 pounds of plant modules, including 100 yards of soil, 56 planter boxes and 4,000 individual modules of live root plants.   Further complicating the process was logistics.   Crane availability and other logistical considerations in a busy office building meant that work could only be done on Saturdays and Sundays.   This was carried out with a crew of eight working 12-hour days for two weekends in early May 2009.”   Another reason for doing the crane work  over weekends was so that the fire routes were not blocked during working hours.

One other interesting  challenge was  the need to access window washing anchors set within the gravel, which was accomplished through Scott Torrance’s design (photo below from Treehugger).   The landscape architect positioned the  plantings “so that the lines for the window washers go between them.  The gravel also keeps people on roof away from the glass.” 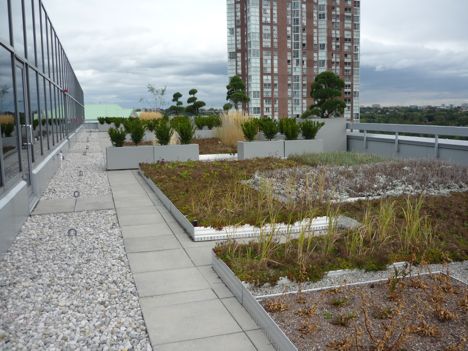 Kees Govers, BSc (Agr), of LiveRoof Ontario Inc. adds perspective from the installation process:   “In May 2009, Gardens in the Sky devoted two consecutive  weekends to the installation.   On the first Saturday, all the planters and furniture were hoisted to the 8th floor balcony and positioned, and on the second Saturday the LiveRoof modules were craned up and installed along with the irrigation and the pathways.

“The pathways were all preloaded in LiveRoof modules and were simply installed as any other module.   As a result, the entire green roof is truly portable.  It would take approximately one day to completely remove the entire green roof without a trace, if and when the time came.   Because LiveRoof utilizes patented “˜hoppits’ as conveyance for the modules to the rooftop, even grasses and perennials can be completely full grown ready for installation in the nursery and installed without any damage.  As a result, the green roof is truly finished on the day it is installed rather than requiring another two to three years of growth.”

These two photos below were taken by Kees  approximately two weeks after installation was completed (late-May, 2009):

Kees explains that unlike other modular systems, LiveRoof doesn’t stack their modules.   “We also use only a minimal amount of stretch wrap to prevent overheating of the plants.   As a result we can ship fully grown grasses, perennials and sedums without any shipping damage to the plants and without having to utilize refrigerated trailers.   The elevators are removed during installation to create a monolithic green roof without visible modules.”

“We always utilize the living mulch principle when executing plant designs.  No deciduous plants are used without an evergreen groundcover underplanted.  Because everything is full grown and already maturing at the time of installation, there is never any exposed growing medium.   As a result, wind erosion of the growing medium is virtually non-existent even when the deciduous plants have gone dormant.” ~ Kees Govers

Patrick Biller, Green Roof Maintenance & Installation with Flynn Canada, Gardens in the Sky, believes the ESRI is a unique project.  “It has all the typical Sedums and grasses that other LiveRoof systems have, but it also has an area devoted to plants that are unique to green roofs.  A lot of rock garden Sempervivums were used, as well as thyme and Nepeta.   The sculpture in the center is unique and points in the direction of the city with the CN Tower in the background.”   From a maintenance point of view, Patrick says that the  LiveRoof system is quick to install, fills in quickly, and reduces the maintenance challenges, and that everything about the system is efficient.   Other than a few select perennials such as coreopsis and evening primrose dying out,  the greenroof  has filled in very nicely.   In early May Flynn Canada/Gardens in the Sky planted some more coreopsis and yarrow.

“I had the privilege of doing the spring clean-up on this site this spring, and I enjoyed myself thoroughly.  All the hustle and bustle of the city, with the Don Valley Parkway directly underneath and general road noise are masked up there, and it feels like an oasis.  Not very often do we do projects that can actually separate you from your surroundings, offering a tranquil space for people to enjoy.  I wish more projects were like this one!” ~ Patrick Biller

Despite the many site  challenges, ESRI Canada believes the company was able to “transform a previously dreary concrete terrace into a lush green roof that provides important environmental and business benefits, including improved air quality, lower energy consumption for air conditioning and reduced stormwater runoff.   Previously, you would be met by dust and highway noise when you stepped out onto the terrace.   Now, employees and visitors can walk out to green outdoor space for formal meetings, corporate events and informal lunch breaks.   They can enjoy the breathtaking view of perennials and tall grasses intermingled with sedums that can also be seen from inside and neighbouring buildings.   Birds and butterflies have also become frequent visitors to the green roof.   It has been transformed into a colourful, living garden enjoyed by many.”

Josephine gave us her personal reflections on the greenroof and its contribution to a healthier Earth:   “It’s been almost a year since ESRI Canada’s green roof was installed.  It was about the same time when I started with the company.  I have never worked in an office with a green roof before so I was, and still am, extremely impressed with ESRI Canada’s environmental effort and proud to be part of a company that is committed to being green.

“From inside the offices, you get seamless views of the garden, which is broken into zones that extend the interior space.   It’s a refreshing place to relax during breaks and provides a great venue for more formal corporate gatherings.  It’s designed with several walkways, so you can tour the roof and look closely at the more than 50 varieties of shrubs, flowering plants, grasses and trees.

“We’ve hosted numerous tours for customers, partners, journalists, and tenants in the building and surrounding buildings who are curious to see the green roof.  They are always amazed by how cool and quiet it is there, given that the busy Don Valley Parkway is just below.   Birds and butterflies are also frequent visitors.  It’s a living garden enjoyed by many.   In addition to providing weather and noise insulation, it retains stormwater and delivers significant energy cost savings.   It also serves as an excellent demonstration of and inspiration for preserving nature and caring for the environment.  “

Kudos to  all the stakeholders for a wonderful project and in particular  to Josephine Chan of ESRI Canada, who says she’ll be donating the $100 prize to a local charity that protects migratory birds.   Josephine adds, “I love seeing them on the green roof!”

Lloyd Alter from Treehugger.com created two videos about the project for his article “Prefab, Portable Green Roof Installed In Toronto” of October 5, 2009, where he interviewed ESRI General Manager John Kitchen and the landscape architect, Scott Torrance.     Also read more from  the  project  profile in the Greenroof & Greenwall Projects Database, and watch a short video about ESRI Canada’s Garden in the Sky below:

1 reply to "GPW: ESRI Canada’s Garden in the Sky"