The Pacific Northwest in general is known for eco-friendly, sustainable building policies, high-performance green architecture, and local innovative building designs.   In fact, Seattle holds the distinct position of being the first U.S. city government committed to Silver LEED™ facilities, adopting its Sustainable Building Policy requiring new city buildings over 5,000 sf to  obtain the U.S. Green Building Council’s certification rating in 2000.   But the Seattle area also distinguishes itself in that it has an unusually high number of residential greenroof applications.

Our GPW through today is the lovely 280 sf “Private Seattle Green Roof Garage,” built in 2003 by architect Rob Harrison and his wife, Frith Barbat.   Located in a geographically diverse southeast Seattle neighborhood,  the area is filled with parklands, lakefront, wooded hills, and quiet residential streets and boulevards.   Aside from the living roof, construction methods were eco-conscious from the beginning as the homowners  capitalized on the property’s existing carport  foundation and built  the garage mostly with materials salvaged from the previous deck.   It’s really not surprising, since Rob Harrison, AIA, is a Certified Passive House™ Consultant and principal of HARRISON architects.

The  Seattle, Washington firm  has been in business since 1984, with the last 18 years devoted to sustainable design.   HARRISON architects’ work is based in “lyrical sustainable design”: conserving energy and resources, using healthier materials and finishes, reducing long-term costs, and making poetic places.   By working with consultants, contractors and suppliers who share their values, the  experience  results in a convivial, collaborative design and construction process.    And when you’re the client/architect, and it’s easy to be creative in this environment.

“Since it was our own house (rather than a client’s!), we thought it would be a great opportunity to experiment with a less expensive residential alternative to $15/sf proprietary (and warrantied) green roof systems used on commercial projects, and so promote the use of green roofs in residential applications.” ~ Rob Harrison

And since Rob was a  member of the local chapter of the Northwest EcoBuilding Guild, he had plenty of local expertise and volunteers for help.   The Northwest EcoBuilding Guild is an alliance of builders, designers, suppliers, homeowners, and partners concerned with ecological building in the Pacific Northwest.   Their mission is to provide leadership in education to transform the built environment and build a sustainable society.   In those years, hadj design  directed the greenroofing efforts for the Guild,  and the firm’s principal, Patrick Carey  (also our Architecture Editor), was one of the consultants and volunteers on this project, as seen below in the bucket brigade system used to haul the growing media up to the roof.

Originally, Rob designed the space to call his own for a “manly” workshop (the garage is featured on the cover of the book ManSpace: A Primal Guide to Marking Your Territory by Sam Martin, about “dens, caves, lairs, hangouts, hideaways, workshops, studios, drinking sheds and man houses”).    The one-car garage  housed space for tools, one bicycle, two vintage motorcycles and  their  Mini Cooper.

But things have changed – at present, the garage now holds just one motorcycle (a new gas-efficient model with a catalytic converter) and the family’s six bicycles.    They sold  the car seven months ago, and have  been giving the car-free life a try – so far, so good!

Originally planted with Eco-Turf (a mixture of baby blue eyes, red clover, yarrow, and fescues) and a variety of drought tolerant sedums, they’ve also added strawberries, nasturtiums and poppies to the greenroof.

Venturing onto YouTube this past February, Rob came across the above advertisement for Pepsi’s new humanitarian/environmental effort, the Pepsi Refresh Project, and was surprised to see his own green-roofed garage!  He explains that a couple years ago fashion/rock star photographer Karen Moskovitz came over with a young model family to shoot some stock “lifestyle” photos and video using his garage as the backdrop.  He’s quick to point out that it’s not him watering the roof!

“We might do that if we’ve planted new plants up there and need to get them started, but otherwise, not,”  Rob says.   Actually, maintenance has been  really minimal – they only watered the first year during establishment and have only spent about one  hour’s worth total weeding and the occasional introduction of new plants during the first three years.   He adds, “It’s a bit odd to be shilling Pepsi, even if very indirectly, but I do like the idea that we are clearly living in some one’s idea of a better future!”

By the way, the Pepsi Refresh Project  is looking for people, businesses, and non-profits with ideas that will have a positive impact in their communities, and is giving millions of dollars in grants in the categories of Health, Arts & Culture, Food & Shelter, The Planet, Neighborhoods, and Education.

Any lessons learned with a greenroof so close to home that you can see daily?   In the more recent photos that Rob sent me, see above and below,  it’s obvious the roof has seceded to mostly grasses, so I asked him if is it still that way – Yes.

Rob says now that the roof is seven years old, in retrospect he would not have introduced any grasses on the roof at all, as the area planted in Eco-Turf has spread over the entire roof and overtaken the sedums, which  are still there, but are hard to see.   But he muses,  “The wavy grass does have its own attractions, especially in the dry summer here, where it reminds me of the Palouse in eastern Washington.”

Does he plan to keep it as it has naturalized or does he have other designs?   Rob’s response:

“I’m of two minds on the secession of the roof to mostly grasses.  On the one hand I like the look of the grass, and the way the motion of the grass in the wind animates the building, and it’s tempting to let the roof do its own thing and see what develops naturally.   On the other hand, grass forms a dense mat of roots that is surprisingly impermeable.   We haven’t made a big decision to replant the whole roof yet, but we’ve been pulling out clumps of grass here and there, and planting more sedums as we acquire them from friends and neighbors.”

This beautiful private  Seattle vegetated roof  is one example of sustainability on a smaller scale in a city full of greening efforts.   It has been featured in many  publications  and tours, both public and private. The photo above  resulted from an AIA Seattle seminar on greenroofs held at  the architect’s  home in 2006, in conjunction with folks from Bohlin Cywinski Jackson.

Visible from the alleyway behind it and, more importantly, from the home’s  kitchen window, the Harrison/Barbat family agrees their Seattle garage greenroof is a pleasure to behold every day – in all seasons and all forms. 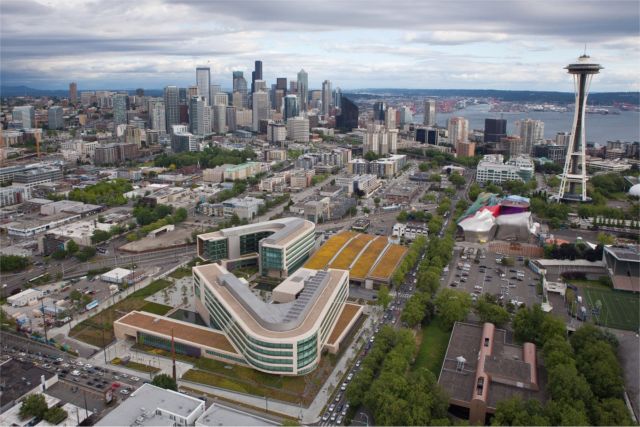