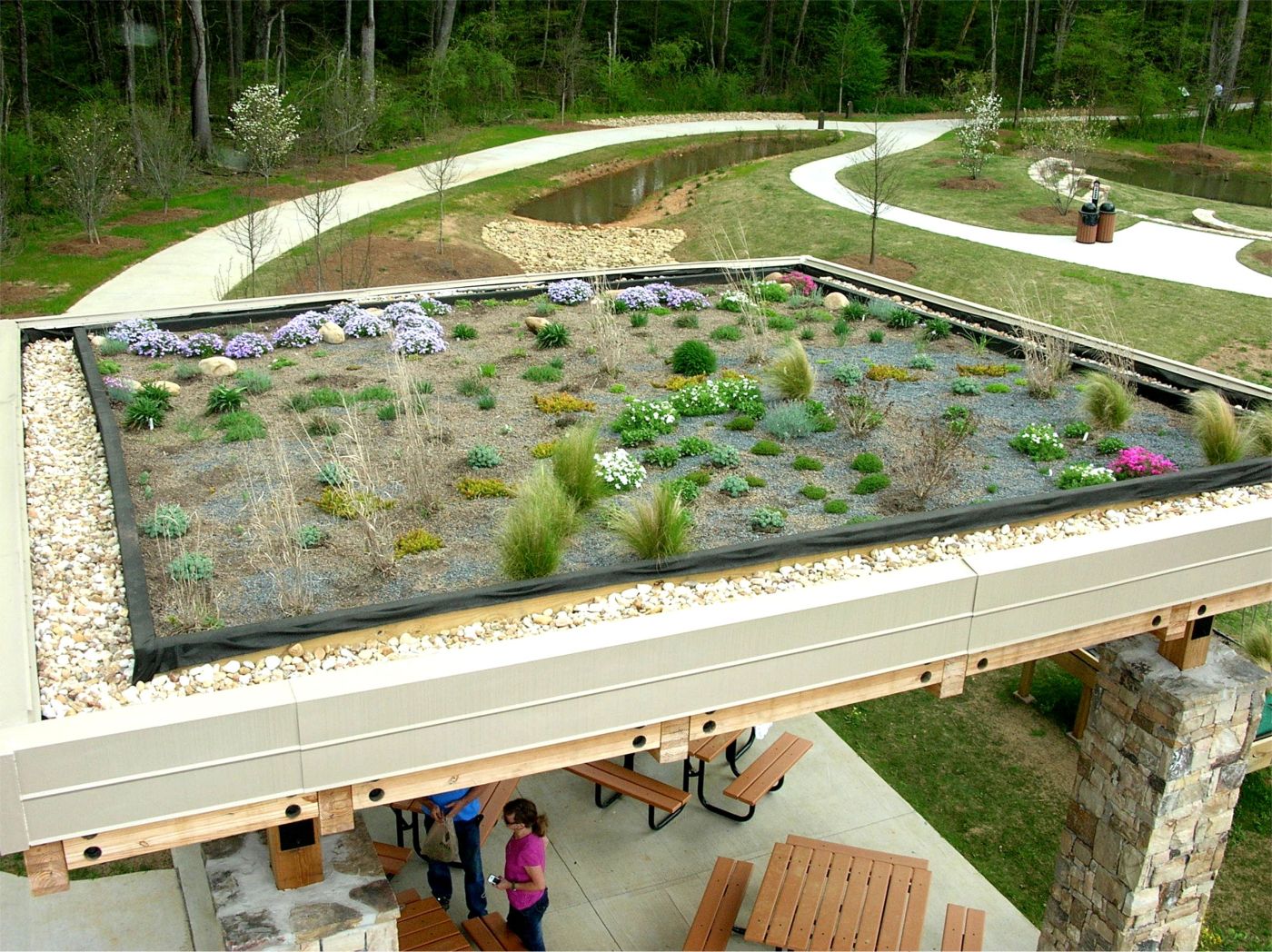 Rock Mill Park is open daily to the public and is located at 3100 Kimball Bridge Road, Alpharetta GA 30022 (the intersection of Rock Mill Road and Kimball Bridge Road. Learn about the City of Alpharetta. Check out the first episode of Greenroofs.com’s WebTV series “Sky Gardens ~ Greenroofs of the World” featuring Rock Mill Park: 1 of 4; 2 of 4; 3 of 4; and 4 of 4. See Greenroofs.com’s 60-second video “Love the Earth: Plant a Roof!” from May, 2008 for The Sundance Channel’s The Green “What’s the Big Idea” Contest, which made it as a semi-finalist. For more info about the greenroof, please contact designer Linda S. Velazquez, ASLA, LEED AP, GRP of Sky Gardens Design and Greenroofs.com at: linda@greenroofs.com.

Rock Mill Park was presented the region’s Watershed/Stormwater Project of Excellence STREAM Award at the 2016 Metropolitan North Georgia Water Planning District’s 15th Anniversary Celebration. The City of Alpharetta also received the 2008 Water Resources Project of Excellence award for Rock Mill Park, given annually by the Georgia Association of Water Professionals and the Georgia Section of the American Water Resources Association to a project in Georgia that provides for water quality, habitat or flood control and in addition, Rock Mill Park won a 2008 Georgia ASLA Merit Award.

While many people have been involved with the Park from the late 1990’s, in particular this project has been championed by former Alpharetta Councilwoman Debbie Gibson. The 576 sf Greenroof Pavilion of Rock Mill Park was initially designed by Linda Velazquez in 2000 while a senior at the University of Georgia, in partial fulfillment of her Bachelor’s of Landscape Architecture. She selected the natural site as her Senior Project after interning with the City of Alpharetta in 1999 and researching the cultural and historical attributes of the 40-acre wetlands, woodlands and upland forest site of the sensitive Big Creek watershed. Linda discovered the original owner of the site to be “Sitawake,” Situ,wa,ka, or Situwakee, a full-blood Cherokee who was also a private or warrior in the Creek War of 1813-14, in Captain John Brown’s Company. Copies of original documents from the Georgia State Archives and the National Archives in Washington, D.C. include Gold Lottery Maps showing “Indian Possession,” Cherokee Land and Valuation Assessments, military records, and more. Linda says, “My on-going research continues to explore the possibility that our Alpharetta Sitawake is the same prominent minor Cherokee chief Situwakee who was a Trail of Tears Detachment Leader in 1838.”

Taking the cultural significance and potential importance of the original Cherokee ownership into consideration along with the City’s desire to protect and highlight the southeastern Piedmont watershed area, Linda originally designed the space as “The Greenroof Pavilion and Cherokee Lore Trails of The Alpharetta Environmental Education Center: Celebrating Ecological Design in a Native Landscape.” Along with the Greenroof Pavilion were trails denoting significant native and introduced plants used by the Cherokees for medicinal and cultural reasons, set along paths with historical and cultural signage highlighting property documents and Cherokee myths and other lore. The plan for the Education Center was later replaced with a passive park for Alpharetta residents which respects its natural surrounding by implementing many Low Impact Development (LID) techniques, including the now updated 24′ x 24′ Greenroof Pavilion.

Funded in part by an EPA Clean Water Act Section 319 Grant and the recipient of greenroof material donations from many companies, the Greenroof Pavilion was planted on October 25, 2007. Breedlove Land Planning, Inc. and Lyman, Davidson Dooley Architects, Inc. transformed Linda’s original vision of the Greenroof Pavilion’s architectural character into a beautiful structure set within many prominent stormwater features. The 6 – 1/2″ deep growing media of the planting plan represents the sloping topography towards Big Creek, from high to low, dry to wet conditions reflecting watershed movement from a meandering meadow-like design to a flowing river pattern. Linda selected both native and introduced species to represent an aesthetically pleasing, sustainable plant community historically found in the Piedmont forest/wetland area of the Big Creek watershed.

The sensitive cultural and physical nature of the site’s Cherokee history shall be honored and preserved to showcase the truly unique character of the site’s “Genius Loci,” or Spirit of Place through certain plant selections and other site elements. Some of these include: The Native Vine Display – a trellised living wall of sorts which acts as passive solar shading for The Greenroof Pavilion. The choice of seven vines is a design representation of the seven Cherokee clans and include: Cross Vine; Trumpet Creeper; Virgin’s Bower; Climbing Hydrangea; Carolina Yellow Jessamine; Yellow Coral Honeysuckle; and Passion Flower. Two copper hummingbird rain chains terminate into Mini-Rain Gardens on the low side, celebrating the natural flow of water back to nature.

In September 2019 Linda Velazquez redesigned the layout and size of the Greenroof Trial Models as the wooden structures were showing their age and needed replacement. A local Alpharetta Eagle Scout volunteered to construct them. In addition to the Greenroof Demonstration Model, originally the Trial Gardens consisted of three modules (see paragraph below for specifics): Native, Non-Native, and Modular. It was determined the scale of the models was detracting from the natural beauty of the site and interfering with some of the sightlines, specifically the pond and the adjacent Sweetbay Magnolia. As a result, it was decided not to rebuild the Modular tabletop and the remaining two were reduced slightly to 3’ x 4’. The size of the Greenroof Demonstration Model remained the same size at 6′ x 3′ and all modules were lowered by 4″ to accommodate wheelchairs and youngsters. In addition, accent plantings at the stone columns and open grid porous paving were added at the Greenroof Pavilion entrances, filled with Stepable herbs. Volunteers (including Linda) planted these during Rivers Alive 2019 reusing plants when possible from all the old modules.

Linda based the design of the original 2007-2019 Greenroof Demonstration Model & Trial Gardens modules (approximately a total of 92 sf) on the previous work of Janet Faust, formerly with JDR Enterprises. In fact, Janet and her husband Doug Faust built them with materials donated by JDR. The initial four tabletop models at ground level included The Greenroof Demonstration Model, a 6′ x 3′ module with three panels: the left side is a Mock-Up using selective plants from the four zones found on top of the actual Greenroof Pavilion; the center panel is an asphalt tiled, non-greened Control Panel, where stormwater runoff rates and pollutants can be tested as compared to the Greenroof side; and the right side panel shows the representative Material Section of the American Hydrotech greenroof system.

In 2014 Linda Velazquez redesigned the plantings of the two bioretention ponds on site originally constructed in 2007, in front of the Greenroof Pavilion. The City of Alpharetta redesigned the engineered soil and plants were selected from the Georgia Stormwater Manual. Maintenance is performed ideally once or twice a year, often with Rivers Alive volunteers who hand weed.

As part of its Park interpretive signage, in 2009 the City of Alpharetta contracted a 14-page outdoor book on the design of the Greenroof Pavilion, Greenroof Technology, and the Cherokee History of the Rock Mill Park site. Many people contributed to the book, including Linda and Caroline Menetre, who volunteered greatly over the years. It can be found at the entrance to the Greenroof Pavilion, easily viewed and accessible from the Big Creek Greenway trail.

Frequented by many Alpharetta residents and visitors, The Greenroof Pavilion & Greenroof Trial Gardens of Rock Mill Park is an ongoing research project.