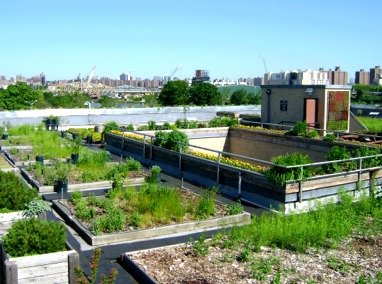 The green roof atop the Randall?s Island 5-Borough Administrative Building serves as a working laboratory for green roof design and construction, providing knowledge to the rest of the agency and other groups while at the same time conserving and giving back to the City of New York. Thus, the Administration Building roof serves as an experimental station in which the performance of many different systems can be monitored and compared. Technical Services? roof at Five Borough is truly at the forefront of green roof technology with some of the most innovative systems available. Read Artie Rollins and John Robilotti’s June 29, 2011 Guest Feature on Greenroofs.com Various Types of Green Roof Systems Come Together at NYC’s 5-Boro Complex and Linda Velazquez’s June 21, 2011 Sky Gardens Blog post GPW: NYC Parks Five Borough (5-Boro) Administrative Building. See the May 22, 2012 First Sun-Root? System Installed in North America by Green Roof Technology and Highview Creations Press Release from Green Roof Service (Technology). Download the June 3, 2011 PDF “5 Boro Green Roof Handout” and visit the New York City Department of Parks and Recreation’s Green Roof page.

Learn about the following companies in The Greenroofs.com Directory: Tremco; rooflite; Green Roof Service; and Sempergreen. Visit GaiaSoil at: http://www.gaiasoil.com/.

Randall?s Island is home to the NYC Parks Department?s Five Borough Administrative Building, the central hub for our Citywide Operations division as well as our renowned Parks fleet. On Earth Day 2007, Mayor Bloomberg released a comprehensive sustainability plan for the City of New York titled PlaNYC. In response to this visionary initiative, the Five Borough Technical Services division adopted its own sustainability task force. After extensive research, Five Borough discovered that installing a green roof can contribute significantly to the city?s sustainability effort.

In spring 2007, the Five Borough Technical Services Division began a program of installing green roofs of various designs atop the Five Borough Complex on Randall?s Island where it is headquartered. To date, the division, together with Parks? Green Apple Corps, has installed 24 systems covering over 29,000 sf of roof on the west wing of the building. Taken together, the systems installed at Five Borough will, arguably, comprise the fifth largest green roof in New York City.

Moreover, Five Borough?s is the only known green roof in the country, quite possibly the world, to feature such a vast array of distinct systems side-by-side. These systems vary by types of growing medium, depth of growing medium, and plant selection. There are also other non-traditional green roof systems here including a green wall, container systems, a ?walkable? atrium system, as well as planters on top of parapet walls.

Spring 2007: Technical Services constructed its first, rather modest, pilot intensive green roof system. Based largely on a standard design by Barrett Roofing, which donated about $3,000 worth of roofing material, it measures 40?long x 20? wide. 12″ of GaiaSoil?, a low density mixture of compost and recycled expanded polystyrene foam coated with pectin to make it water absorptive, was used as growing medium. Planted with nine species of plants native to the New York City metropolitan area, it was not only the first green roof system installed at 5-Boro but also the first installed throughout the New York City Parks Department.

2008: In the spring and early summer, Technical Services installed 6 variations of extensive green roof system designs and four atypical systems. Two of these extensive roofs were modular and utilized 0.032 gauge aluminum trays that were fabricated in Technical Services? own Citywide Shops. Although all the trays are 2′ long x 2′ wide, Tray System I sports a 4″ depth while Tray System II was fabricated 6″ deep. Each tray measures 20′ x 40′ and both use rooflite® growing medium, mainly a mixture of heat-treated clay and organic materials.

Tray System I is planted with 440 Sedum plugs and 2,000 sf of Sedum cuttings. Tray System II is planted with 1,520 Sedum plugs. The plantings in both systems are from the same seven Sedum species and were selected for their robustness, contrasting color and texture, and winter interest. A comparison of these two systems as time passes should provide an indication of the effect of growing medium depth on the hardiness of Sedum green roofs.

Another modular system consists mainly of Green Paks? manufactured by Green Roof Blocks. Green Paks? are bags made of high density polyethylene that is weaved. The bags measure 20″ x 32″ x 4″ deep. They are filled with a proprietary growing medium consisting of 80% expanded shale and 20% organic composted pine bark. Green Paks? were shipped to Technical Services filled with this medium, transported to the roof and then set in place atop a root barrier and drainage mat. Slits were then cut into the bags where 6 Sedum plugs were inserted. The Green Paks? system measures 800 sf.

Technical Services also experimented with an extremely simple system, installing five 10′ x 12′ x 5″ deep plots that consisted of an EPDM roof protection layer covered with Metro-Mix 510 growing medium?a medium usually used in container gardening?and surrounded by wood framing. Unlike every other standard extensive green roof Technical Services installed, this monolithic system does not have a drainage layer. Planted with 3 species of native plants, this “Container Growing Medium” system should provide an indication of how well a green roof can function without a drainage layer and whether one can flourish in a medium not specifically designed for green roofs.

BioTrays? are 17″ x 17″ x 3″ deep trays made of coconut husk fiber. In August, they were purchased empty and then filled with mineral soil and planted with three selected varieties of Sedum. Eventually, the BioTrays? will break down to form a monolithic system and their decaying components will nourish the mineral soil by providing additional organic matter. The BioTray? cover an area that is 10′ x 20′.

2009: In May a 2″ deep Xero Flor Green Roof System, which is an ultra-extensive system developed in Germany, was installed. Comprised of a pre-vegetated sedum mat, water retention fleece, a drainage layer, and a root barrier, Technical Services installed 6,350 square feet of this monolithic system atop the roof of the vehicle maintenance garage. At 8 lbs/ft2 dry weight and 14 lbs/ft2 wet weight, this Xero Flor? system is 5-Boro?s lightest system to date.

In June they installed a 12-panel green wall system from ELT Easy Green consisting of 20″ x 20″ x 2″ plastic grid trays, mineral soil and three different varieties of Sedum. Also installed was 650 sf of another very lightweight system planted with wild flower seed featuring a custom growing medium developed by Five Borough: an 80/20 mix of Metro-Mix 510 and Perlite (heated-expanded volcanic material), making the medium very lightweight. Unlike all other systems atop Five Borough, this wildflower system was planted from seed and covered with jute mesh to prevent wind erosion.

They also transformed their 800 sf atrium, making the atrium system Five Borough?s first walkable green roof. It was installed 4? deep with nearly 500 sf of planted area. The plants were carefully selected to tolerate fluctuating amounts of sun and shade caused by the seasonal and daily changes in the angle of the sun. These plants, creeping myrtle, red wing phlox, and candy stripe phlox, were placed in the non-walkable area while tall fescue was selected for the traffic area due to its resiliency to foot traffic. And in October, a 400 sf Multi Depth Mineral Soil system with a mix of Sedum plugs & cuttings was installed. The undulating contours not only provide visual interest but also serves as a test for the growth of the sedum relative to the varying depth of the growing medium.

2010: In April/May, a 4,000 sf Vegetable Roof Garden designed by Senior Project manager, Rick Gordon RLA, was installed: 10 – 50′ long by 6′ wide planting beds. The growth medium composed of 1/3 mineral soil, 1/3 perlite and 1/3 compost/manure varies in depth but averages out to 7.5 inches. The vegetables planted 12 inches on center are tomatoes, peppers, muskmelons, squash, pumpkins, cabbage, spinach egg pants and herbs. In May, Columbia students were provided a 400 sf test area where they installed a green roof consisting of 8? of GaiaSoil?, planted with an assortment of native perennials. Although they had no prior installation experience, they designed the system solely themselves.

In the summer Five Borough Technical Services also installed a number of atypical “green roof systems.” It built 20 cedar planter boxes measuring 3′ x 3′ x 2′-4″ high. The boxes were each filled with Metro-Mix 510 growing medium, a 3 gallon size Mugo Pine, Sedum sieboldiana and Sedum acre. Other atypical systems include an overhead trellis with a surface area of 650 sf, but a roof footprint of only 90 sf; a wood framed parapet atop the atrium parapet wall; and a metal framed parapet planter atop the west wing?s perimeter wall. Also, elevated planters were installed which are used to store extra plants material for fill?ins and are being utilized as a community garden for the office staff.

In the fall (October/November) of 2010, two 250 square feet Bioroof? system test plots were installed. Based in Ontario, both Bioroof? systems are said to be designed to meet the specificweather conditions of the northeast. The first type was their high performance green roof system called EcoSystem which has a total height of 10?, a saturated load weight of 25 lbs./ft?, and a storm water capacity of 1.5 gallons/s.f. The second system is known as BioLite. At a total height of 4.25? it has a saturated load weight of only 14.25 lbs./ft? and a total storm water retention of .65 gal./ft?. Because of the late season installation, planting will be done in the spring with pre-vegetated sedum for the BioLite System and a seeded application of Bioroof’s Northern Meadow mix for the EcoSystem.

In the winter December 2010 / January 2011, Parks experimented with another growing medium of its own concoction. Designed by Chief of Technical Services, Artie Rollins, the soil is made of 80% Perlite and 10% Metro-Mix 510 produced by SunGro? which contains 15-20% Peat Moss, 25-35% Vermiculite, 40-45% Pine Bark, and 10-20% Bark Ash. This 800 square foot system mostly comprised of Perlite, is very light yet is able to retain 5-8 times more water than that of untreated garden soil. Wildflowers are to be planted in the near future for this system.

2012: On 29 March 2012, Green Roof Technology, in partnership with Highview Creations, installed the first Sun-Root? Solar Green Roof at the City of New York Parks & Recreation?s 5-Boro Administrative Building on Randall?s Island. The Sun-Root? System combines a non-penetrative PV mounting module with an extensive green roof. Each Sun-Root? module can support multiple PV panels which can produce over 350 W of electricity.