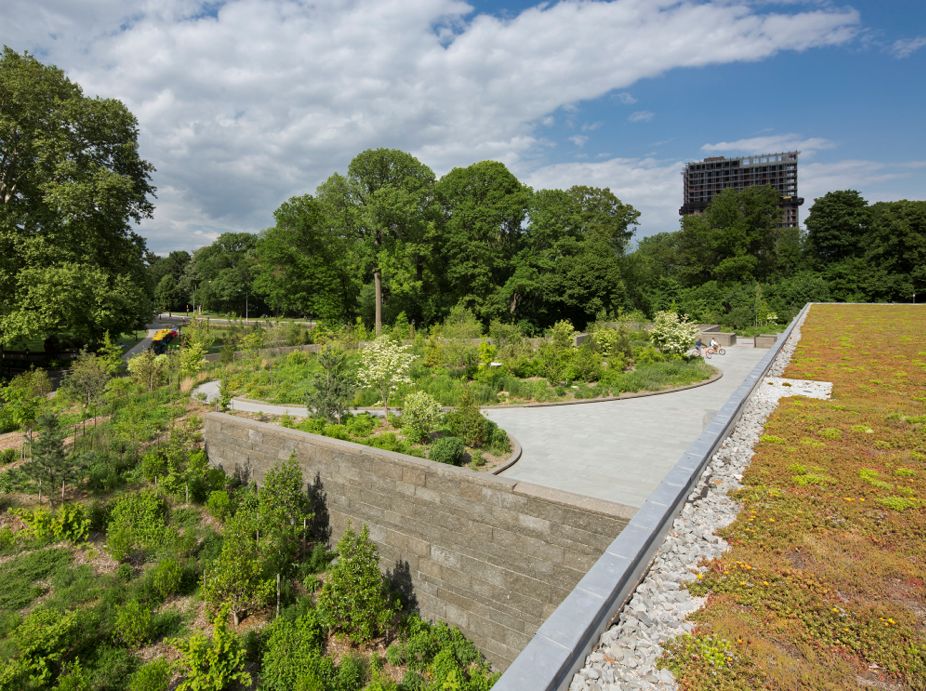 Prospect Park is one of Brooklyn’s most treasured destinations and a national landmark. It is a world unto itself: a 585-acre (237 ha) oasis of scenic beauty for relaxation and recreation. The park is situated between the neighborhoods of Park Slope, Prospect Lefferts Gardens, Ditmas Park and Windsor Terrace, as well as Flatbush Avenue, Grand Army Plaza and the Brooklyn Botanic Garden. Prospect Park is run and operated by the New York City Department of Parks and Recreation and is part of the Brooklyn-Queens Greenway.

Since 1987, the Prospect Park Alliance has been working to restore and maintain Prospect Park for the enjoyment of millions of visitors each year. Lakeside is the largest and most ambitious project in Prospect Park since its creation nearly 150 years ago. Spanning 26 acres, this $74 million restoration by the Prospect Park Alliance transforms the southeast corner of the Park into a popular scenic and recreational destination. Designed by noted architects Tod Williams and Billie Tsien, in collaboration with the Alliance’s acclaimed landscape architect Christian Zimmerman, the Samuel J. and Ethel LeFrak Center at Lakeside provides seasonal ice skating, roller skating, biking, boating and water play.

The LeFrak Center at Lakeside is a popular destination within the beloved Prospect Park. Neighborhood residents and tourists are attracted to the 75,000 sf recreation facility which is considered to be the most ambitious capital project to date in the historic park, designed by Frederick Law Olmstead and Calvert Vaux in the nineteenth century. The twenty-first century insertion includes concessions and two skating rinks with seasonal programming; depending on the season the rinks are used for skating and hockey or roller skating and water play. A 23-foot high canopy supports an Extensive Green Roof above and a whirlwind of activity below including ice skating in the winter and roller skating in the warm seasons. The second exposed ice rink transforms into a water feature in summer. The concession buildings are buried in the land and covered by Intensive Green Roofs – allowing the structures to blend into the park landscape. Designed by Roofmeadow, the extensive Canopy Roof measures 24,601 sf and the intensive Landscape On Structure area is 19,728 sf, with a highly variable slope ranging from 1% to 30%.

This eight-acre redevelopment project is a national model for integrating cutting edge sustainable design into a historic park. The Lakeside re-development is LEED Gold certified and has earned the 2015 AIA Institute of Honor Award for Architecture. In addition, it earned the 2014 MASterworks Award for Best Urban Amenity, 2014 Society of American Registered Architects (SARANY) Excellence in Design, and the 2013 National Public Design Commission Special Recognition.

The Sedum Extensive Green Roof on the skating rink’s canopy and the Intensive Green Roofs on the buildings that frame the rinks seamlessly integrate into the surrounding landscape, preserving historic design while meeting the needs of a diverse contemporary urban community. The Intensive Green Roof areas connect to each other and to existing pathways and landscape grades, allowing visitors to explore the park’s beauty on winding paths spanning the roof and ground planes. The Intensive Green Roof footpaths approaching from the east and north ascend gradually and imperceptibly over the top of the 20,000 square-foot complex, eventually ending at an overlook of the facility and the scenic Prospect Park Lake beyond. The Intensive Green Roof pathways include Olmsted masonry paving details that were meticulously reproduced by the architect to pay homage to this historic landmark.

An innovative stormwater collection strategy and rainwater retention cistern result in zero rainwater runoff from the Intensive Green Roof areas. Rainfall collected from paved surfaces is directed beneath elevated curbs where it then travels through two different layers of the Green Roof profile into a gravel trench that leads to a 15,000 gallon retention cistern behind the east building. Water entering the cistern is pre-treated by a centrifugal filter. An efficient sub-surface drip irrigation system draws on the collected rainfall in the cistern to irrigate the forested Intensive Green Roofs. The cistern’s capacity is more than sufficient to irrigate the Intensive Green Roofs and stores ample reserves to sustain the drought tolerant plant palette during particularly dry summers. In cold months, when the irrigation is not operating, excess rainfall naturally purges the system, preventing the build-up of salts which could would otherwise be detrimental to the plantings. No potable water is used to irrigate the Lakeside Green Roofs.

As long as the sub surface irrigation system is active in warm months, 100% of rainfall will be utilized under normal conditions. Water leaves this system only when the 15,000 gallon cistern capacity is exceeded, which generally may occur between October and March. Although about 30% of annual rainfall is expected to be discharged during this cold season period, this is not the end of the stormwater story. Water that is not utilized by the irrigation system and discharged from the buried cistern is conveyed to infiltration basins where it recharges aquifers. The extensive green roofs will reduce annual runoff by 60%, or more, and any excess runoff from this roof flows into Prospect Park Lake. As a result, Lakeside is a zero runoff facility.

The Intensive and Extensive Green Roof prevent over 900,000 gallons of rainwater from entering the sewer each year. This project demonstrates that a rich, forested roof landscape can be created and sustained without consuming the public potable water resource. As a zero discharge site, the Lakeside Green Roofs and ground landscape serve to infiltrate and reduce pollutants without burdening the local water treatment plants. Within Lakeside, high-efficient, low-water-use plumbing fixtures save over 205,000 gallons of water each year.

Prospect Park is one of the most loved and utilized parks in New York and Lakeside is one of the most popular destinations within the 585 acre park. On the way to their skating lessons, children follow the Intensive Green Roof paths, dodging honey bees, chasing butterflies, and surreptitiously picking a few flowers. Teenagers, intent on adventure, spend time together in the Park forming friendships that may last lifetimes. Adults commute to their urban offices via the ground-level and Intensive Green Roof park paths, enjoying a bit of exercise and a woodland hike. According to their website “Lakeside can accommodate any group’s public or private space needs—no matter the occasion or season.” This is one popular facility!

Located in the inner city, the Intensive green roof at Lakeside attracts many who value the chance to experience a natural respite, some exercise in the fresh outdoor air, or a quiet place to read a book in the sun. Bicycle racks that accommodate 90 bicycles are located near Lakeside to encourage non-automobile transportation.

The rolling topography the Intensive Green Roof is created by polystyrene insulation, up to five feet thick, which underlies large areas of the deep profile. Water can percolate freely downward through this insulation to the basal water recovery system.

The LeFrak Center at Lakeside – Prospect Park incorporates many green building practices; read about all of its numerous at their Sustainable Features page from Prospect Park Alliance.