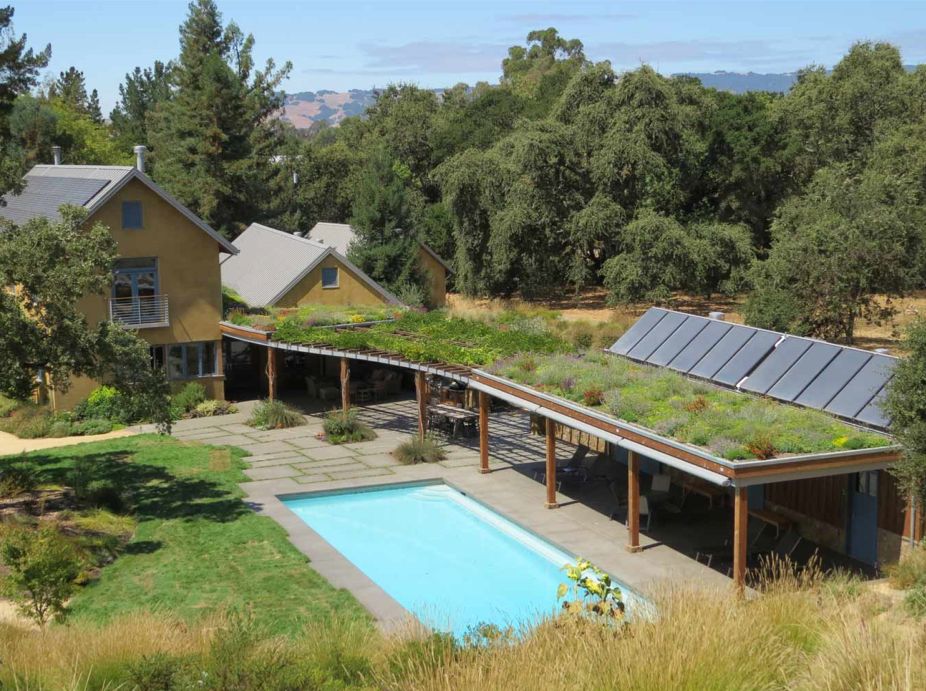 DESIGN: The vegetative ‘living’ roofs span between the buildings of the compound, functioning to visually and physically unite the building site into a centralized hub of the farm. The living roofs also play a vital role along with straw-bale construction, natural lime plasters, reclaimed lumber, passive and active solar systems, thermal mass (sand-bed) storage, ground loop heat-pumps, and a variety of energy, lighting and water efficient measures to create a model of environmentally sensitive design. As a result the house achieved LEED for Homes Platinum certification in 2013.

The living roofs were designed as a “green ribbon” that physically ties the various buildings of the residential compound together. As one approaches the main house, the living roof is visible above the entryway. The roof swells up and over a dome-like form before leveling out towards the back of the house. The roofscape extends itself out beyond the perimeter walls of the house to form an open-air dining and cooking area. This roof transitions into a vine covered arbor that bridges the main house roof with the pool house veranda.

The design physically links together what would normally be 3 detached buildings (main house, studio/garage and pool house). The living roofs act to dematerialize the building forms and creates a synergetic integration between the architecture and the surrounding landscape.

PLANTINGS: The vegetative planting plan was developed to provide a high degree of biodiversity for both aesthetic and ecological values. Color, texture and form of the planting palette enriched the overall design of the roofs in conjunction with the architectural facade. Low-growing ground cover species are intermixed with herbaceous species that form a taller canopy layer.

RAINWATER HARVESTING: The project developed an on-site rainwater harvesting system (20,000 gals). The rainwater is harvested from the standing seam metal roofs of the main house and studio. The water is stored in an underground cistern (a former swimming pool) during the winter raining season and is then utilized to irrigate the living roofs, as well as to flush the toilets within the house.

WATER CONSERVATION: The irrigation system is a satellite based weather controller from Hydropoint which increases or decreases irrigation water use as determined by the local weather conditions (water conservation). Irrigation is a mixture of overhead with MP Rotors from Hunter and generic surface drip line.

SLOPE STABILIZATION: The dome-like roof form of the main house, whose upper portion of the roof exceeded 35 percent, required that a mechanical slope stabilization system (Envirogrid). The cellular confinement system had to conform to the complex curvature of the dome shaped roof.

BIO-CHAR: The lightweight soil medium used on the roof had a percent of Bio-char mixed into the composition (SYMBIOS custom mix). This soil amendment was incorporated into the mix in order to achieve better pH buffering, moisture and nutrient holding capacity as well as the ability of the material to sequester carbon (CO2) from the atmosphere.

LANDSCAPE: The historical agriculture heritage left its mark on the land and restoration was required in order to gain the farm an organic certification. The overall landscape plan including native habitat restoration and soil building, water efficient irrigation, LID grading, bioswales and functional landscape plantings.