We are more in need of public space than ever. Opened during the pandemic lockdown in Bangkok, the CPSP reminds us that we could not wait any longer to take action in addressing our public green space, public health, and climate crises and in building resilient cities. Image: LANDPROCESS / Panoramic Studio via V2COM

We hope that your new year is off to a wonderful beginning, and we’re very pleased to be sharing the Chao Phraya Sky Park, an excellent example of adaptive reuse of a long-neglected city infrastructure. Keeping it interesting, the different levels of the vegetated bridge range from +0.5 to +4.5 meters from the structure and the plants and walkways are woven through the park.

Landscape architects LANDPROCESS, Kotchakorn Voraakhom and team who also designed the renown Thammasat University Urban Rooftop Farm (TURF), have contributed another important, successful, and beautiful project situated in Bangkok’s most significant historical area along the Chao Phraya River. Along with the architect and other designers, kudos to everyone’s persistence and fine work! And thank you to LANDPROCESS for once again sharing their video so we could include snippets into our own Featured Project Video.

Amidst the COVID-19 pandemic, the remarkable elevated public space, the Chao Phraya Sky Park (or CPSP), opened in 2020. Abandoned for almost 40 years, the halted infrastructure project was given a second life as the newest Bangkok landmark, and the nation’s first pedestrian bridge park spanning a river.

Designed by Urban Design Development Center, N7A Architects, and LANDPROCESS, the CPSP went from vacant to vibrant and its 360° view connects the city’s historic town and modern skyline.

Completing the incomplete dream of the Lavalin Skytrain. Left abandoned for 40 years; the Skytrain structure was labeled an “amputated bridge” for its inaccessibility. The failed mega project shares the load between the roadways of the adjacent bridge in a gap of 8.5 meters wide and 280 meters long. Image: Unknown, via LANDPROCESS via V2COM

For the first time, the Memorial Bridge has been given its place in the frame. With a 360-degree view, pedestrians can enjoy a foreground view with the Memorial Bridge, overlooking Bangkok’s historical postcard destinations. CPSP has shown the future possibilities from abandonment to placemaking for increasing the health of the citizens and their city. Image: LANDPROCESS via V2COM

In 1984, Thailand hoped to be the first nation to establish a sky train in Southeast Asia to carry commuters across the city’s main artery, the Chao Phraya River. But the project was cancelled shortly after completion of its structure, and Bangkokians named the abandoned infrastructure the “amputated bridge.”

In 2015, the Bangkok250 project was established for revitalization, led by the Department of City Planning and Urban Development, Bangkok Metropolitan Administration, Chula Unisearch, and the Urban Design Development Center, Chulalongkorn University. At one meeting, a community leader asked, “Why not put this useless bridge to good use, so our children can walk across the river to school?”

Not competing, but respect. The CPSP is located next to the nation’s most important monument: the Memorial Bridge, the new structure of CPSP humbly emulates the curves of its predecessor weaves the slopes of its counterpart to adorn the city’s landscape in unison. Image: LANDPROCESS via V2COM

Located adjacent to the Memorial Bridge, a tribute to King Rama I, the founder of Bangkok, the CPSP emulates its curves in a contemporary manner. By merging two existing community parks across the river, CPSP becomes part of the 280-meter-long park’s connectivity on both ends. Squeezed between two sides of heavy traffic with just 8.5 meters of width, the designers split the linear park into two divided yet interweaving pathways to maximize space.

At the Sky Park’s midpoint, where the two divided pathways combine, a curved hilltop walkway is formed. Small cascading steps carve out sitting areas for a linear performance stage created for special events. The planting design consists of various low-maintenance plants—requiring less soil and having high resistance to wind and sun—with branches and forms that don’t widely spread and obstruct both roadways and driving viewpoints.

At the Chao Phraya Sky Park’s hill curve midpoint. The two divided pathways merged at Sky Park’s midpoint, where the topography is raised as a hilltop curve, formed by small cascading steps that carve out a sitting area and a performance stage for special occasions. Image: LANDPROCESS via V2COM

Bridging not just people but also wildlife. CPSP shows the importance of walkability, creating low carbon-emission construction from adaptive reuse while restoring its citizens’ physical and mental health with greenery. These natural gradients promote urban biodiversity, providing a microclimate and green corridor for pollinators and insects. Image: LANDPROCESS via V2COM

These native species promote urban biodiversity by providing a microclimate and green corridor for pollinators and insects. From the CPSP, pedestrians can enjoy views with the Memorial Bridge in the foreground, overlooking Bangkok’s postcard destinations like the Temple of Dawn, the Temple of the Reclining Buddha, and the Wichai Prasit Fort.

With a stunning panoramic vista of Bangkok over the River of the Kings, the vegetated Chao Phraya Sky Park provides a unique viewpoint from which to observe both the city’s past and present.

From Vacant to Vibrant. Situated in Bangkok’s most significant historical area, the 360-degree view of the Chao Phraya Sky Park bridges the city’s past and present through the juxtaposition of the city’s old town and the modern skyline at one glance. Image: LANDPROCESS / Panoramic Studio via V2COM 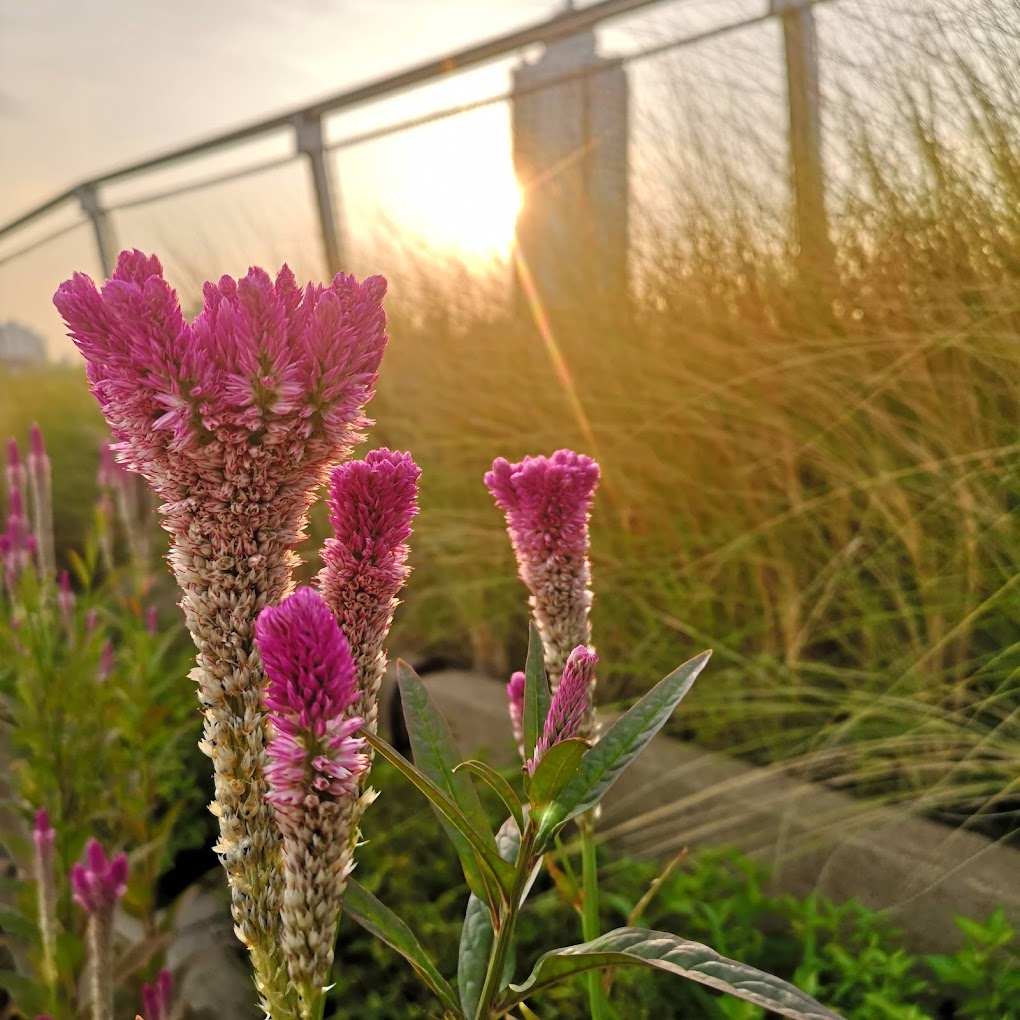 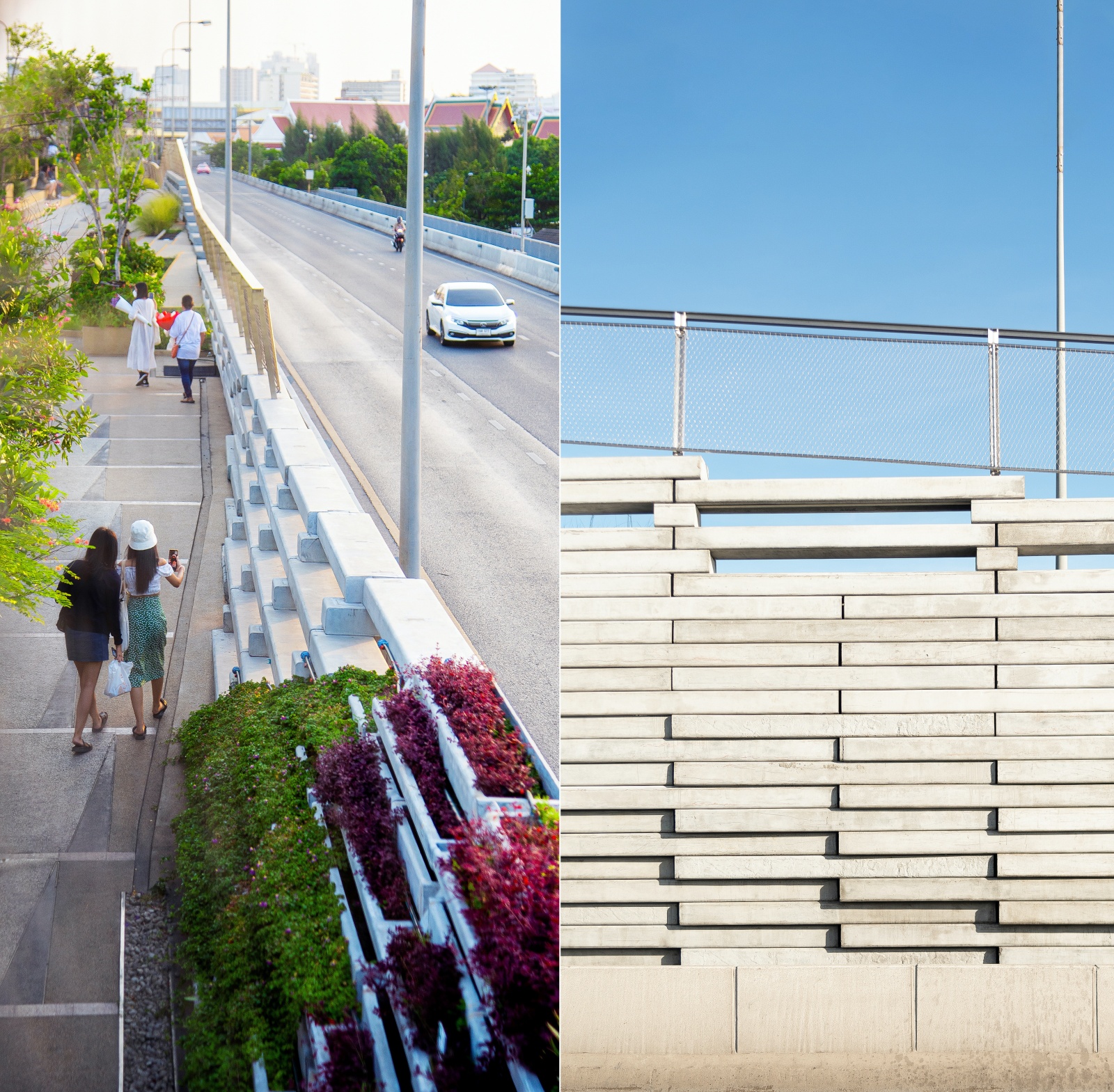 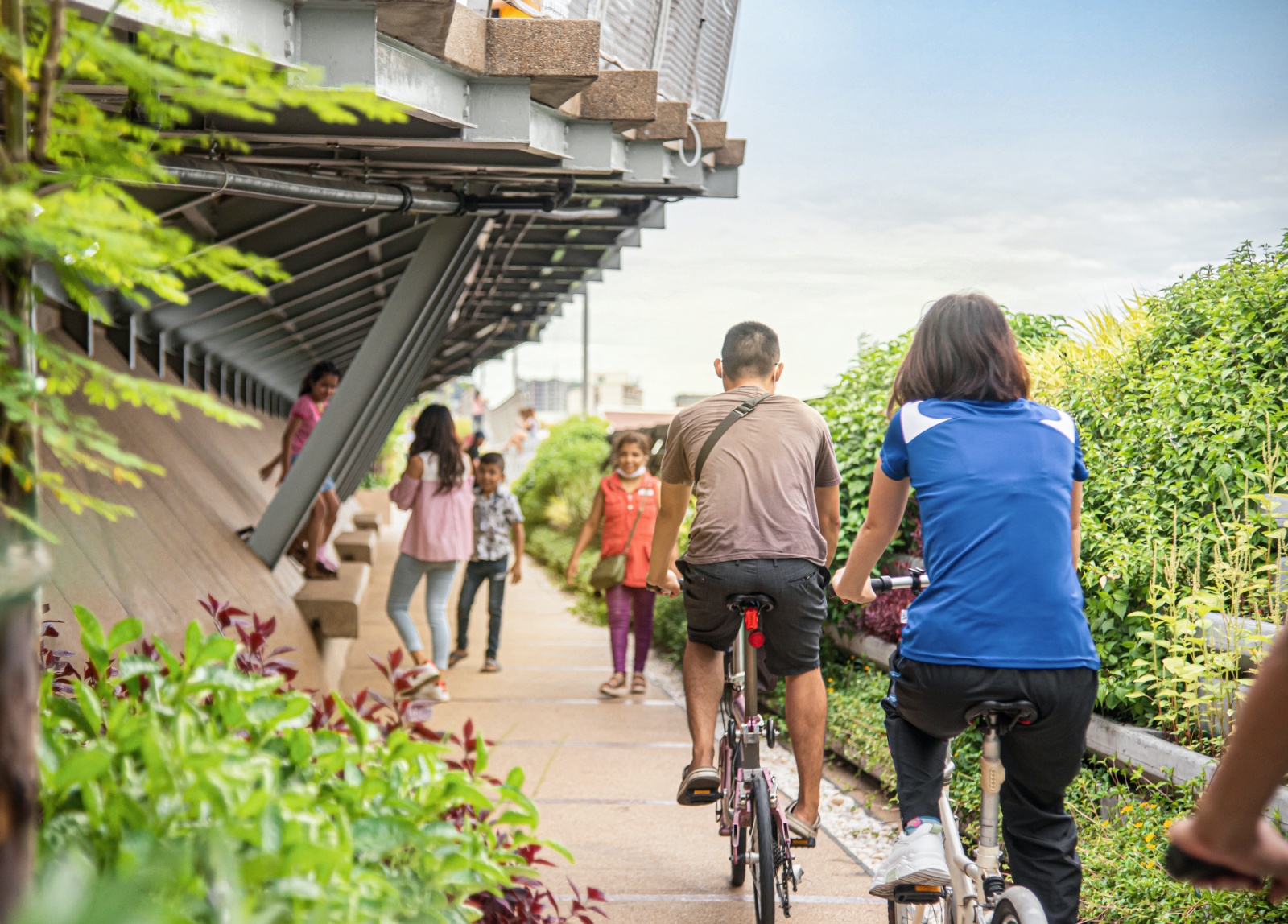 See the Chao Phraya Sky Park to view ALL of the Photos and Additional Information about this particular project in the Greenroofs.com Projects Database.

Forming Sunrise and Sunset Outlook by intertwining walkways
Cutting across the shortest section of the river, the 280-meter appears straightforward in the visual distance. To lengthen the users’ experience, CSPS hides its visual endpoints on both ends by raising intertwining walkways while forming Sunrise and Sunset Outlooks. Image: LANDPROCESS via V2COM 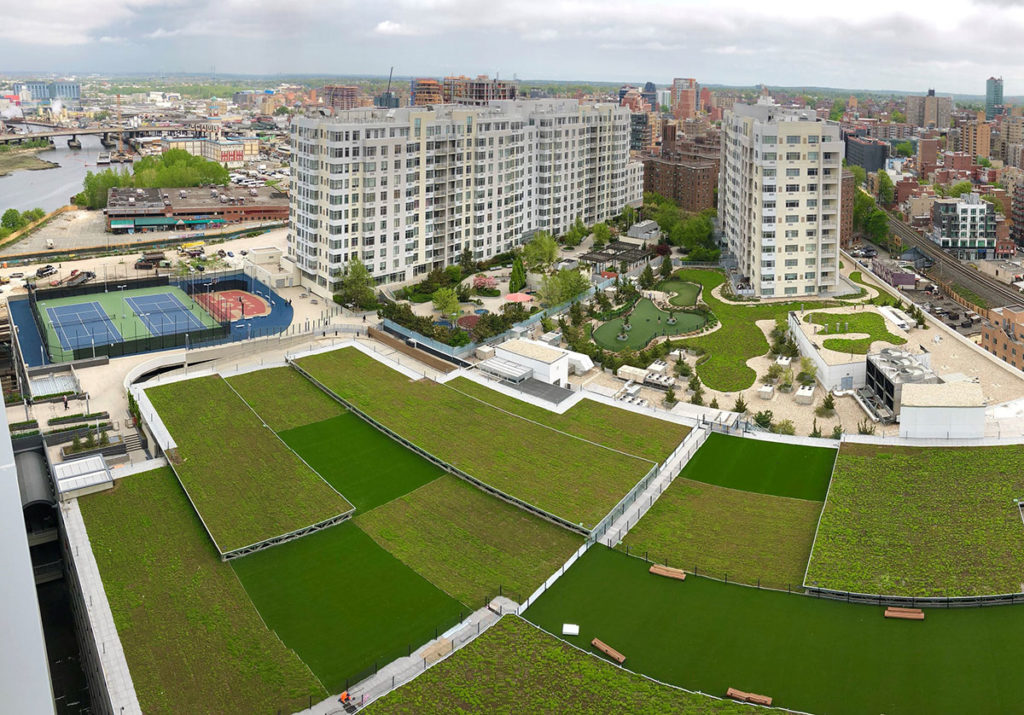 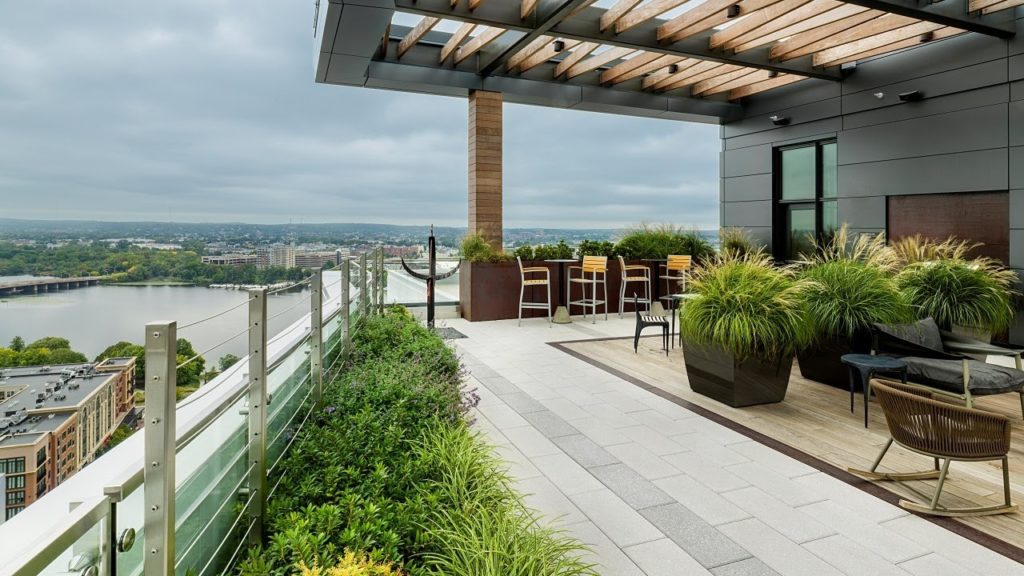