Today we have the pleasure to air the Collaborative Video “Skyrise Ag: 5 Ways to Local Food Production” with Helen Cameron, Mohamed Hage, George Irwin, Ben Flanner and Alan Joaquin.  The current importance of urban agriculture is evidenced by the numerous food farms currently operating at many different scales and many different parts of the world.  We visit just 5 innovative approaches to growing local produce on horizontal and vertical spaces on rooftops and on the interior from Canada and the United States. 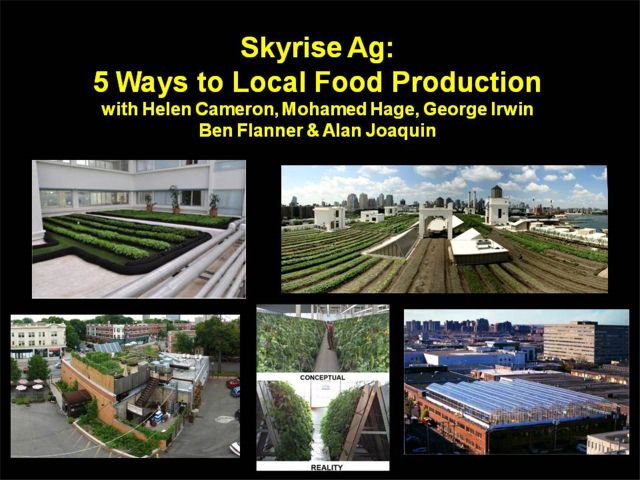 Watch Mohamed Hage, the founder of Lufa Farms in Montreal; Helen Cameron, co-owner of Uncommon Ground in Chicago; Ben Flanner, head farmer, CEO, and co-founder of Brooklyn Grange Rooftop Farm in New York City; George Irwin, the founder and CEO of Green Living Technologies International in Rochester; and Alan Joaquin, the founder of FarmRoof in Waimanalo on the island of Oahu. 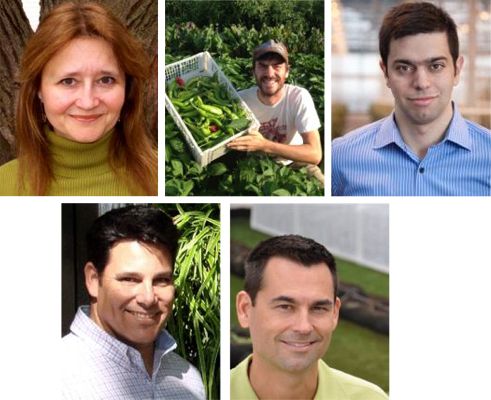 “Mohamed Hage: The founder of Lufa Farms tells how his 31K-square foot greenhouse, opened in 2011, is bringing fresh vegetables year round to families in Montreal. Antiquated zoning regulations and building codes, rather than agriculture, were the most challenging hurdles before he could get his business “off the ground.” Hage believes that rooftop farms will change the fresh-food dynamic and vastly improve the way city-dwellers eat.

Helen Cameron: The co-owner of Uncommon Ground shares how the multiple-award winning restaurants in Chicago have been operating for 21 years as community-based, committed to supporting local farmers and purchasing as locally and sustainably as possible. Helen shares their mission of giving guests a high quality dining experience at a relatively affordable price, all while educating guests on the importance of a thriving, healthy local food system.

Ben Flanner: The head farmer, CEO, and co-founder of Brooklyn Grange Rooftop Farm, based in New York City, will take the audience on an overview of Brooklyn Grange. Ben will describe the green roof systems that the farm uses, soil media, the ins and outs of farming on a roof, sales and distribution, NYC’s first commercial honey producing apiary, and Brooklyn Grange’s other entrepreneurial activities.

George Irwin: The founder and CEO of Green Living Technologies International (GLTi) describes a scalable vertical farm that utilizes buildings, factories or otherwise unused spaces refurbishing them to grow quality produce. Utilizing the GLTi “A” Frame configuration, The Food Factory is dedicated to providing local jobs and is an educational, research and development facility as well as a place for community members to congregate. The concept of urban farms is not new, however the Food Factory is a year round vertical farm that uses high quality compost vs. hydroponic growing, with the prototype in Rochester.

Alan Joaquin: Based in Waimanalo on the island of Oahu, FarmRoof was founded by Alan Joaquin in 2008. With a focus on innovation, our company has invested heavily in research and development. The FarmRoof® system has been refined both on rooftops throughout Hawaii and at ground level on our mountainside farm. Our proprietary technology promises to forever change both the local food system and the urban landscape. We are deeply committed to cultivating a sustainable future for Hawaii and beyond. Protecting our planet’s natural resources and ensuring food security is critical to maintaining our cultural, social, and economic health. We are honored to be a part of positive global change. Our video will highlight the journey of this exciting new company, provide a glimpse of where we came from and where we are headed, and give an overview of the key management decisions that were made along the way.” ~ VS2013

Watch “Skyrise Ag: 5 Ways to Local Food Production” with Helen Cameron, Mohamed Hage, George Irwin, Ben Flanner and Alan Joaquin below or see it specifically on its own channel, the Greenroofs & Walls of the World™ Virtual Summit 2013: