Each week you can expect to learn What’s New here on Greenroofs.com through our “This Week in Review” video.  Here is the transcript from  February 3rd, 2012 with an overview from the beginning of the new year  from our daughter,  Anjuli – click on the photo below to see the video, or here.  Enjoy!

– Hello, I’m Anjuli Velázquez and after a short hiatus, welcome back to This Week in Review!  First of all, we here at Greenroofs.com wish all of you a very healthy and prosperous New Year, and hope you’re off to a great start in 2012!

–  Projects of the Week

–  Our project of the week is the Private Brussels Residence Vertical Garden & Greenroof built in 2006 in Brussels, Belgium. The architect of the private home is Philippe Samyn with Patrick Blanc as the botanist and designer of the Vertical Garden Wall. Construction took eight years with one year of fine-tuning the plant selection and as a result, the four-story house is covered completely in plants on three sides, plus the roof. It was Patrick Blanc’s first opportunity to design an entire house in vegetation, including the rooftop. Patrick had to carefully select the numerous plant species for the lush semi-circular facade form, keeping in mind sun patterns and micro climates. Water is collected from the rooftop edges and used for irrigation and is supplemented by a well; also, any runoff is recycled.

To learn more about the Private Brussels Residence Vertical Garden & Greenroof, designed by the internationally famously fascinating Patrick Blanc, click on our project of the week photo on our homepage (or on the above photo).

– Read about the following Projects of the Week that we’ve featured since my last “This Week in Review” – find them in   Greenroof & Greenwall Projects Database using their profile ID # below each photo (or click on the photo):

– Watch our Greenroofs & Walls of the World™ Virtual Summit 2011 Episode 8: Panel Presentation “The Portland Ecoroof Program: A Cross-section of the Green Roof Movement in Portland, Oregon” with Tom Liptan, Matt Burlin, Amy Chomowicz, Casey Cunningham, and Alice Meyers.  If you haven’t already, check out these first 7 episodes on our greenroofsTV page and on YouTube:

Episode 7: “Constructing Gardens in the Sky” by Terry McGlade 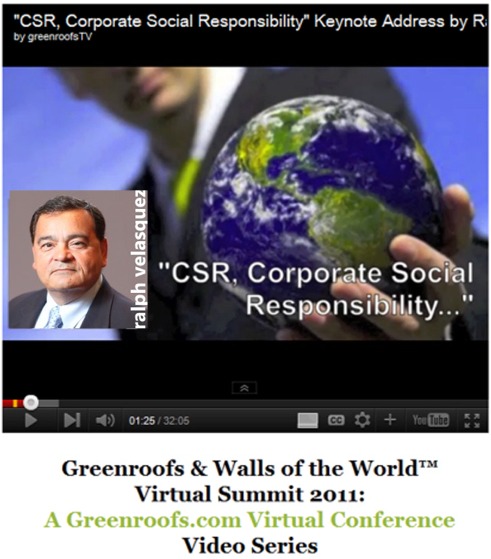 Episode #4: Keynote Address “CSR, Corporate Social Responsibility – The Who, What, Where, When and How” by Ralph Velasquez

–  Don’t forget: the  2012 Greenroofs & Walls of the World™ 12 Month Wall Calendar is still available for purchase – now at the discounted rate of $9.95, so order yours today!

– RUBBERMASTER/A & A Melters are approved by Material Manufacturers.

– Prides Corner Farms (a LiveRoof ® Licensed Grower) is looking for a Green Roof Sales Specialist in the Metro NY area.

–    This week, the NRDC released a new report on how local and state governments can stimulate potentially billions of dollars of private investment, to offset the costs of repairing our nation’s broken stormwater infrastructure. It’s worth a read for policymakers, investors, and anyone who receives a wastewater or stormwater bill from a local utility. The new report, “Financing Stormwater Retrofits in Philadelphia and Beyond,” uses the City of Brotherly Love as a test case to explore how innovative financing mechanisms, currently being used for energy efficiency retrofits, can be adapted to the stormwater management context.

– The Sustainable Sites Initiative™ (SITES™) has announced the first three projects to be certified by the nation’s most comprehensive system for rating the sustainable design, construction and maintenance of built landscapes. The corporate headquarters of an international manufacturing company, a new university green space and a children’s playground in an urban park are the first to be recognized for their sustainable land practices from among 150-plus pilot projects that began the certification process in summer 2010.

– The Milwaukee Metropolitan Sewerage District (MMSD) is providing incentive funding to increase green roof coverage within its service area. The Regional Green Roof Initiative will provide up to $5 per square foot of an approved green roof project. The District’s interest in green roofs is to hold rainwater where it falls, thereby diminishing the risk of sewer overflows and improving the overall water quality in the region. In addition to managing stormwater, green roofs offer numerous additional environmental, economic, and social benefits.

– The District Department of the Environment (DDOE) is once again providing rebates, at $5 per square foot, for green roofs to qualified applicants for the third consecutive year. The Anacostia Watershed Society is administering the program for DDOE and believes this is a great opportunity to help people cover some costs of their proposed green roofs as well as an opportunity to reach out to those unfamiliar with this technology all in an effort to help restore the watershed.

– February 8th-9th: is BUILDEX Vancouver at the Vancouver Convention Center in Vancouver, BC, Canada.

– February 8th-10th: is ProGreen EXPO 2012 at the Colorado Convention Center in Denver, CO.

– And February 15th: is the Green Roofs for Healthy Cities class, Green Infrastructure: Policies, Performance and Projects, held at the Southface Institute Eco-Office in Atlanta, Georgia.

–  Daniel Beekman of the New York Daily News, reports on “Classroom farm at Bronx public high school, Green Bronx Machine, shut down despite fresh successes.” He says that the “celebrated classroom farm that yielded fresh produce and great jobs for students at a South Bronx public high school has been quietly shut down.” For two years, Discovery High School special education teacher, Steve Ritz, used green walls to teach his students about science and technology and how to grow your own vegetables in an urban setting. Lesson plans he developed there are now being used at the college level at the State University of New York. Steve says he’s “disappointed… [and] the kids loved it,” also that the Green Bronx Machine “really took root because it cultivated minds and harvested hope.”

He created the Green Bronx Machine after meeting George Irwin, founder and CEO of Green Living Technologies, and they began growing vegetables while developing a curriculum. Students trained by Irwin even got summer jobs installing green roofs. This program has helped the Bronx students and every one of them who took part in the program has begun college or is on the track to getting there. Senator Gustavo Rivera said, “Steve is a guy who can get people energized about healthy eating…he has proven he can get students to care about school. I hope that continues.” We all hope it does and are confident that Steve will continue his work with the Green Bronx Machine and help even more students.  Check out their Facebook page at http://www.facebook.com/green.BX.machine.

– Lauren Lloyd of the LAist talks about “From Rooftop to Fork: Downtown LA Club Grows Its Own Greens.” She says, California’s largest urban farming operation, Farmscape, recently wrapped a first-of-its-kind project in Downtown LA. A large rooftop garden, designed to grow fresh organic greens sits on top of The Jonathan Club. The 200-square-foot custom organic garden will produce greens such as snap and snow peas, spinach, arugula, lettuces, a variety of herbs and much more in the winter growing season, as well as fruits like lemons, limes, oranges, and figs. Farmscape and the club are loving their new garden.

Farmscape CEO, Jesse DuBois, says “we’re excited to be able grown the freshest produce possible for The Jonathan Club’s new head chef,” and that “we hope that building this rooftop garden right in the middle of Los Angeles demonstrates that food cultivation can happen almost anywhere.” It can happen almost anywhere, and hopefully other urban restaurants and buildings will follow in their footsteps.

–  To learn more about these stories and new ones posted daily, go to our In the News or newslinks section of our website.

–   Send us your green articles, videos and images to  editor@greenroofs.com and share your greenroof or green wall info with the world!

– Make sure to keep up with everything  Greenroofs.com by following us on  Twitter, liking us on  Facebook,  being a member of our network on  LinkedIn, and  subscribing to our  greenroofsTV channel on YouTube!

– This has been This Week in Review for February 3rd, 2012 on   GreenroofsTV.  I’m Anjuli Velázquez and I’ll see next week!

*This week’s episode is sponsored by  The Greenroof Directory, brought to you by  Greenroofs.com.*

Featured Projects
Greenroofs.com Projects of the Week 2015 in Review Video