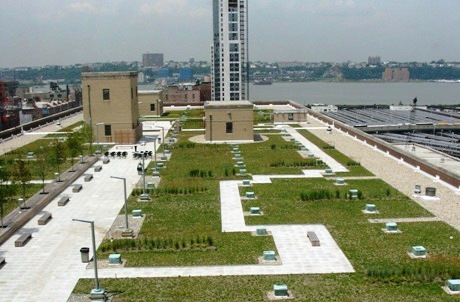 Since 1995 the U.S. Postal Service (USPS) has been honored with more than 75 major environmental awards, including 40 White House Closing the Circle awards for environmental stewardship, and the 2009 Climate Change Champion of the Year Award for efforts to reduce greenhouse gas emissions.   Consistently looking for ways to reduce their environmental impact,  last  July the USPS opened its first greenroof facility atop the seven-story Morgan Processing and Distribution Center  (P&DC) in midtown Manhattan, one of the largest mail processing facilities in the country at 2.2 million sf.   Part of a larger facility modernization scope, construction of the project began in September 2008 and was completed less than a year later in July, 2009, and on budget.   At the opening ceremony, Sam Pulcrano, Vice President of Sustainability said:

“Not only does it provide employees with a beautiful, serene outdoor environment, the green roof will help us meet our goal to reduce energy usage 30 percent by 2015.”

Currently the largest in New York City, the 2.5 acre living roof also serves as a park of sorts for employees who have access to the eco-friendly recreational space.   For example, planters and benches of the dense tropical hardwood Brazilian ipe wood, certified sustainable by the Forest Stewardship Council, provide areas for relaxation and require no sealants or staining – which in turn reduces VOC’s from entering the atmosphere and the stormwater system.   High Solar Reflectance Index (SRI) value concrete utility pavers and roof ballast aggregate  were used,  and the light poles and bollards meet cutoff standards for light pollution.   In addition to providing a spectacular panoramic view of midtown Manhattan and the northern New Jersey shore, the Morgan P&DC greenroof is expected to  reduce the amount of stormwater runoff by as much as 75% in summer and 40% in winter, and is projected to save the Postal Service $30,000 yearly on heating and cooling costs.

Built in 1933,  the Morgan P&DC was designated a historical landmark in 1986.   When the previous 109,000 sf roof needed replacing, engineers deemed the structural loading capacity strong enough to support the additional weight of the growing medium and vegetation needed for  a greenroof, so the USPS decided upon a pilot project.   J.P. Patti Company, a TectaAmerica company, was contracted to re-roof the Morgan Building.   During construction only about 15,000 sf needed to be removed and replaced, and nearly 90% of the original roof was recycled and reused on the roof.   The new roof system consists of a Sika Sarnafil ® 80 mil membrane and gypsum roof board over several layers of extruded polystyrene insulation.   Materials were loose laid over the existing roofing and selected roof areas were covered.  J.P. Patti blew the engineered soil  up to  a height of 95 feet and across  the 300 foot-wide roof area.   The original 176 copper column caps, now green due to natural oxidation, continue to define Morgan as a historic building among the grasses and sedums.   The new roof is expected to last at least 50 years.

The firm  in charge of  the design of the new  safe and sustainable rooftop with the  beautifil swaying native Calamagrostis, trees,  and other vegetation is Elizabeth Kennedy Landscape Architects (EKLA), a multidisciplinary firm, who was brought in as the greenroof  designer in 2007.   In July of last year, Damian Holmes of World Landscape Architect  interviewed Elizabeth J. Kennedy, Principal of EKLA, about the Morgan Processing facility.   EKLA and junior landscape architect Sigal Ben-Shmuel, who served as  project technical coordinator for the greenroof, were responsible for the rooftop layout,  media and plant selections, and planting plan.   The EKLA team also worked closely with  the engineering firm, URS Corporation,  to adhere to strict budget limits.  Elizabeth stressed their  goal in keeping the  “concept to a simple, elegant solution that could be completed on time and within budget without sacrificing the essentials of good design.”

Additional  U.S. Postal Service greener facilities strategies include using hybrid electric vehicles and other alternative fuel technologies.   With nearly 220,000 vehicles traveling more than 1.2 billion miles a year in their fleet (the largest civilian fleet in the world), they plan to meet  their goal of reducing fuel usage by 20% over the next five years.   The Postal Service also has expanded its recycling program in New York City to include mixed paper and cardboard, resulting in nearly 400 tons of materials recycled each month.   And last November they unveiled their revamped usps.com/green website, which provides a myriad assortment of useful info to help consumers make environmentally responsible decisions about their mail.   Did you know that the Postal Service is the only mailing and shipping company in America to be Cradle to Cradle™ certified for the environmental and health standards of its packaging?   They state that their packaging supplies are so green, the half billion pieces provided to customers last year prevented more than 15,000 tons of carbon emissions!

Here are some USPS  environmental achievements in 2009:

Majora Carter, founder of Sustainable South Bronx and now principal of Majora Carter Group, was on hand at the July 22, 2009, dedication ceremony and commented how this roof was not just a roof. “This is going to be the type of education center that teaches people from around the country,”  she said.  And Tom Samra, Vice President of Facilities, reiterated:

“The Postal Service is taking the lead when it comes to making a positive impact on the environment. We’re proud to dedicate our first green roof, and we are pleased to showcase this environmental oasis today in New York City.”

Submitted for LEED certification, the U.S. Postal Service Morgan Processing and Distribution Center  serves as a shining example of federal agency environmental leadership and commitment to green initiatives  in New York and the  rest of the U.S.   Read more about the U.S. Postal Service’s  sustainability efforts in the January 27, 2010 “Statement by Vice President of Sustainability Samuel M. Pulcrano to the U.S. Senate Subcommittee on Federal Financial Management of the Committee on Homeland Security and Governmental Affairs”  here. 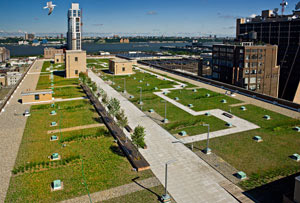