After Linda’s great coverage of the CitiesAlive! Congress, I’m hard pressed to find anything more to say! However, since I was living in Toronto around the time that green roofs were first launched there, and went on a different Congress tour, I’m glad for the chance to reflect.

The opening ceremony on Monday evening was classy, with a unique green roof touch to it. Once you’d had enough drinks and hors d’oevres in the City Hall foyer, you could go to the roof to see the project. It was fun to stroll through the disorderly chaos of a modular installation, frozen in time until the workers would return next morning. 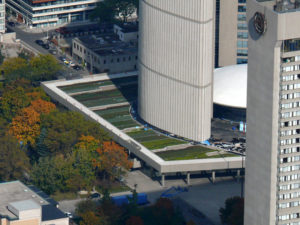 In fact, the original green roof on Toronto City Hall was my very first introduction to green roofs, as I happened to be there the day of its official launch (Nov. 20, 2000). Funny story, that… I’d just moved to Toronto, fresh out of University and looking for work in the environmental field. On my 2nd day in town, I rang up all the companies I’d (blindly) submitted my resume to, and soon had Steven Peck on the phone. I imagine the City Hall event was a perfect diversion for him to get this young keener off his case. Nine years later…hah!

In any case, it’s impressive to consider that this huge renovation replaces the original modular demonstration boxes. If anything, this suggests that the demonstration was successful and convincing! It certainly also helps that Toronto’s mayor since 2003, David Miller, has introduced an impressive range of environmental policies in his time, including the Toronto green roof strategy of 2008. A lot can happen when open-minded and forward-thinking people step into positions of authority!

Tuesday was the only day of talks, which I found a bit hectic. With 4 concurrent tracks going on, and no papers to take home, it was hard to decide which track to go to. Even at the trade show over lunch and coffee, I found this limited  time frame  really challenged the fine balance between catching up with good colleagues/ friends and meeting new ones.

Happily, the congress provided social/ networking opportunities on all three evenings. On Tuesday the Steamwhistle Brewery hosted a BBQ with delicious local brews, as a backdrop to the results of the  CitiesAlive! International Student Design Challenge (Transforming the Face of Buildings). Congratulations to all the faculty-led student teams for their leafy designs! The images below show the first- and second-place winners. First place went to  Cliffside Village, and second place to Compods, both designed by  students from  Ryerson University Architectural Science.  To see the full results of the competition, click  here. 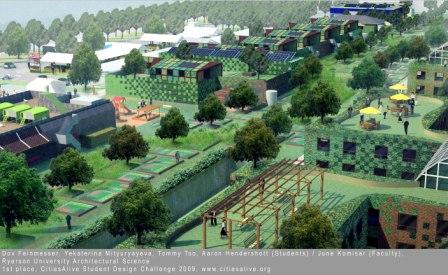 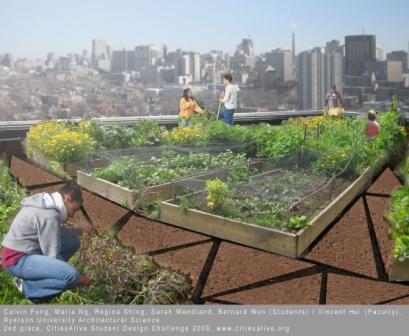 Wednesday was tour day, and I chose to learn more about GTAA Partners in Project Green. The Greater Toronto Airport Authority covers 12,000 ha of industrial and commercial land, including more than 12,500 businesses, and falls under the jurisdiction of 3 municipalities (Mississauga, Toronto and Brampton). Partners in Project Green was founded by Toronto and Region Conservation Authority and GTAA.

I was particularly keen on this tour because the Toronto airport, with its recent mega-redevelopment of Terminal 1, seemed the antithesis of anything “green.” How could such a major development resulting in more air travel be described as a solution for “reducing carbon emissions?” Let’s return to this point later on. The image below shows Toronto Pearson International Airport in the centre, with some features marked to provide some orientation (i.e. Terminal 1, Highway 427 and Etobicoke Creek Stormwater Management Facility). The lands surrounding the airport are part of the GTAA, and therefore also of Partners in Project Green. 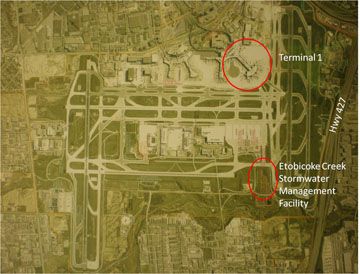 The tour started in FESTI (Fire and Emergency Services Training Institute), a LEED silver-certified building which came into operation in 2007. A state-of-the-art facility, FESTI features many technologies to minimize its environmental footprint, such as a solar wall, green roof, recycled building materials and water-saving systems.  This building has a small Sedum mat green roof, around 1,000 sf in size. At the time of planning, the authority lacked references for green roofs and airports, and was therefore conservative due to its uncertainties about animal and bird use. Pity they missed Linda’s paper about Green Roofs and Airports. 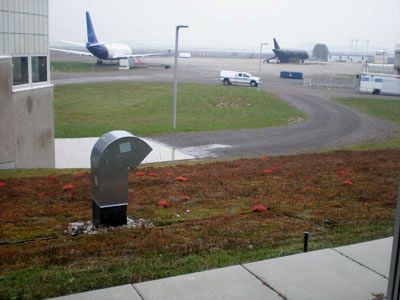 After an extensive tour of FESTI, we went to check out the Etobicoke Creek stormwater management facility. Located under the apron adjacent to Terminal 1, this subterranean facility receives stormwater from an expansive catchment area. It is located underground because surface land is a premium. In order to remain structurally sound underneath taxiing planes, millions of tonnes of concrete were used. Our tour guide, the Head of Environment for GTAA, told us that this project won an award for “the most concrete used in an environmental project.” He wryly added that you can win an award for almost anything these days. 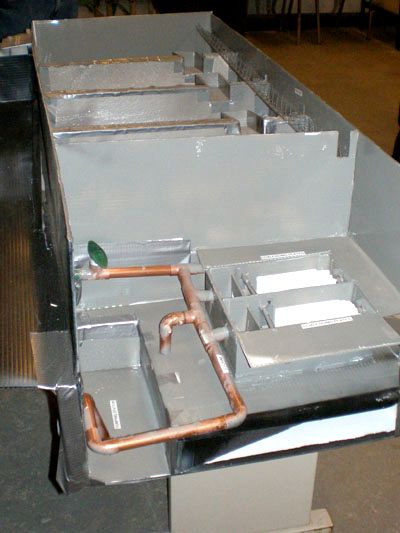 The image  above shows  a model of the Etobicoke Creek stormwater management facility. Note the walkway in the top-right of the image. To give you a sense of how deep and huge this facility is, our guide was monitoring oxygen (and other gases) while we were underground, informing us that “evacuation could not be ruled out.” The model shows how the system works. Stormwater enters the first cell (top of image), then overflows consecutively until the last cell. From the last cell, stormwater passes through two oil separators (the white shapes), which are filled with coalescing plates to trap oil particles, and then released into Etobicoke Creek. 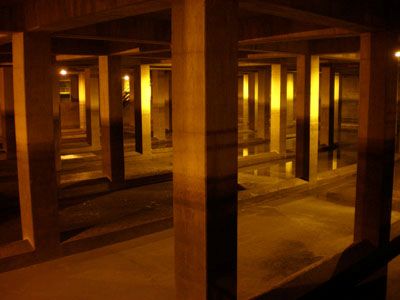 Welcome to what I affectionately recall to as “the caverns.” The image above shows one cell; and the sub-cells within each cell direct water flow. The image below shows the  walkway, along with a  series of tipping buckets (to the left). When the cells need to be flushed of physical debris, these buckets are rotated to release a deluge of water into each cell.  In this image, note also the trough (almost central in the image) which serves to transfer overflow water from one cell to the next. Many thanks to our tour guides from GTAA for this tour! 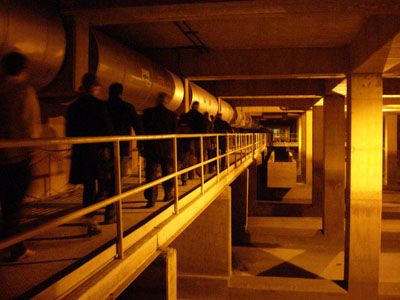 From the airport, our tour continued to the Bayer Headquarters in another corner of the GTAA area. The two Bayer representatives who toured us around the facility showed us everything that made corporate Bayer a great place to work, including an “Outback” walking trail, deluxe fitness facilities, and an 8,500 sf green roof. 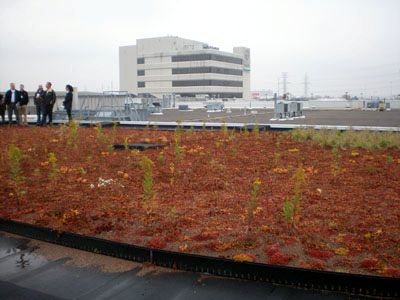 Installed in October 2007, this Sedum-Allium roof serves purely for “˜green’ image. Inasmuch, the company is not interested in the benefits that green roofs provide and is not doing any performance monitoring. Concurrent with our visit, a 6,500 sf cool roof was being installed on a neighbouring roof.  I was actually a bit taken aback at how confidently our tour guides revealed their limited understanding about green roofs, especially considering our group comprised experts in this field. Where my tireless advocate/ educator side would’ve normally been happy to step up and clarify certain details, the corporate confidence encouraged me rather to let it slide. Let the plants “hibernate.”

As far as the overall congress goes, Toronto certainly deserves applause for hosting Canada’s biggest ever green roof gathering. I was very happy to be there! For me personally, it was a wonderful excuse to travel home from Europe.  However, if I were an international delegate without the added perk of catching up with family and friends on either side of the congress dates, I would not have been pleased with the structure of the congress. Considering that delegates came from as far away as Japan, Australia, and Ecuador, I imagine that many of the congress participants were jet lagged. And  all for one single day of information sharing (for which no materials were provided to take home), one day of tours and a couple social events..?

Regarding the tour that I went on, I was unequivocally glad for the opportunity 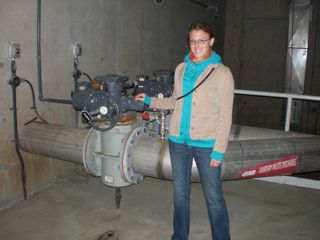 to learn more about how the international airport functions; visiting the stormwater “˜caverns’ was a highlight of my life. Seriously.

Overall, and whether or not this was intentional, for me the tour provided a straightforward understanding of how corporate North America uses the word “green.” I learned that “corporate responsibility” looks as good as its intent, which is a bit weak and not fully informed. In both cases the green roofs may as well have been ordered out of a catalogue. They were so small and plain that it was hard to find anything interesting to discuss (which was perfect since nobody knew much about them anyway, neither performance nor function). These green roofs were simply novel additions to the corporate environmental portfolio, in which appearance has more value over performance.

Recalling my original curiosity, this may also explain how the new Terminal 1 is attributed to reducing emissions and stormwater runoff. Our guide from GTAA explained that the larger apron at Terminal 1 means that planes now queue and taxi less, thereby reducing the projected emissions compared to when it was smaller.

This logic is reminiscent of the typical emissions reduction reasonings associated with Kyoto, isn’t it, namely comparative extrapolation rather than baseline reduction strategies. With regards to stormwater, while we were impressed to see how this issue is managed I didn’t really get a clear answer of stormwater is reduced (and “reduced” is the term used, several times). Further to emissions, stormwater and  the LEED-certified building, additional green initiatives include the Airport’s cogeneration facility, xeriscaping, and reuse of 99% recycled material from the old terminal (by weight).  Considering the scale of the Airport lands, such commitments play a big role to its ecological impacts (however misleading the corporate statements are). 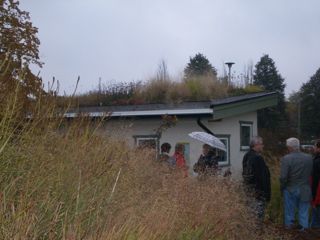 The Mexican Fiesta which closed the Congress at the Toronto Botanical Gardens was fun, with a live mariachi band and free Coronas for all. Terry McGlade did a great job of showing people the green roofs, and it was a great way to close off the Congress. Linda did a great job of summarizing the Fiesta, with wonderful photos, so if you haven’t read her blog post please do check it out!

2 replies to "Christine’s Reflections on CitiesAlive!"