Check out the September 29, 2008 issue of People Magazine, and turn to the next to the last page.  “Up on the Roof” are Troy Wagner and his wife Julie – center stage on the mostly graphic two-page spread, talking about  their 110-year old home in Tacoma, Washington.    Back  at the beginning of the year  Troy had shared his experience with us about building his two greenroofs  using a  rather unique method.   Based on traditional Scandinavian turf homes, one has a  12/12 pitch planted with sod, and he actually has a resident goat who provides a unique but sustainable form of maintenance from time to time! 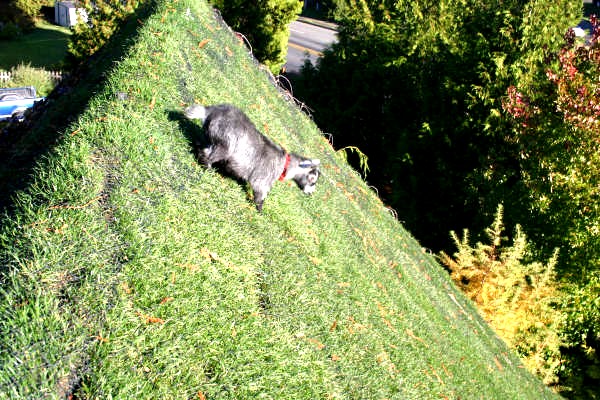 The second  greenroof is  over his lesser pitched garage, which he actually mows.   On one side the couple  tends to vegetables while the other is a flower garden.   Troy told me that after having owned a roofing company for 15 years and looking at 20,000 roofs he felt it was time to set an ecological example, so in 2004 they built their living roofs.   Check out the  “Troy’s Green Roof”  profile in The Greenroof Projects Database. People also has photos of the Roofscapes’ Life Expression Wellness Center,  the California Academy of Sciences, and a private residence in Sunol, California. 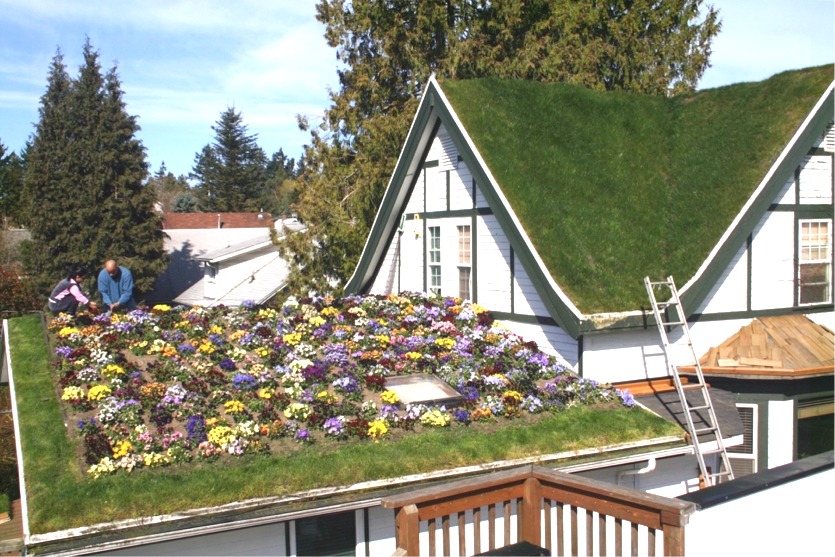 Known for their spectacular coverage of celebrities as well as plain old regular folk, I was surprised when one of the  People article’s authors, Maureen Harrington, called me back in July to pick my  brain about “the phenomenon of greenroofs in the U.S.”  – I guess greenroofs really  are becoming mainstream!   She was looking for facts, and Ed Snodgrass of Green Roof Plants, who was interviewed,  referred Maureen to me.

Everyone wants hard statistics (I also recently fielded some from Bloomberg News and  Newsweek), and  we get  requests  from tons of  freelance writers all over the world – the UK, Chile, France, Poland…you name it.   The point is  our industry is still accumulating these figures since research and projects, at least in North America, are relatively new.   I say relatively because although we can been studying and building modern-day living roofs here since the 1990’s, the Germans have  figures from many types  of testing and  trials from the 1970’s.   The websites of both Green Roofs for Healthy Cities  (GRHC) and  us here at Greenroofs.com have been up since 1999 and in terms of facts, each  has a lot of specific data: GRHC in their Tree of Knowledge page and from  Greening Rooftops for Sustainable Communities Conference proceedings (available for purchase if you didn’t get to each one), and  Greenroofs.com in FAQ’s, ResearchLinks, Industry Support, and The Greenroof Projects Database.

But getting back to the People article, I  suggested ranges rather than hard facts  for costs and energy savings because each greenroof project is unique, something we have all been harping on for years.   And in terms of numbers of projects, I gave my best guesstimate of “more than 500” based on what we do have listed in The Greenroof Projects Database, profiles waiting to be entered, plus approximate numbers for under represented U.S. cities, including the more traditional sod homes found across the northern states.   And they only wanted figures for residential projects, so that number includes not only Single-Family but also Multi-Family and Multi-Use profiles.

That’s why it’s so important to keep compiling case studies from across the globe to show  the world  that  greenroofs are viable, demand and  construction are thriving, and the market is here to stay.   Everyone wants to know where they are, what type they are, who designed them, how big they are, etc., and of course everyone wants to see photos, too!   The Greenroof Projects Database is meant to be a free international resource, so we encourage you to continue submitting profiles with as much information as you feel comfortable sharing, and we always send readers back to the original source for follow up.

Getting back to the article, Ed has a couple of quotes and referring to the added capital investment of greenroofs, he simply says:

“It’s like getting a Prius or solar panels…It costs more upfront but there are long-term savings.”

In addition to the obvious ecologocal, economic, and aesthetic benefits, we all know that greenroofs offer habitat for displaced birds, butterflies and other wildlife.   I don’t know that goats up on a roof  are the wave of the future, but I do believe that eco-friendly architecture is.   In today’s environmentally  conscious climate, eco-trends are here to stay and as these trends become the norm and turn mainstream, we’ll see costs driven down and then the vegetated roofing market will really take off.

And who knows, maybe in a few years’ time alongside perusing the Best & Worst Dressed People issue we’ll be also reading about the Best Sustainable Design  Trends in People –  perhaps even an article  behind the greening of the White House?   Now there’s a people story!