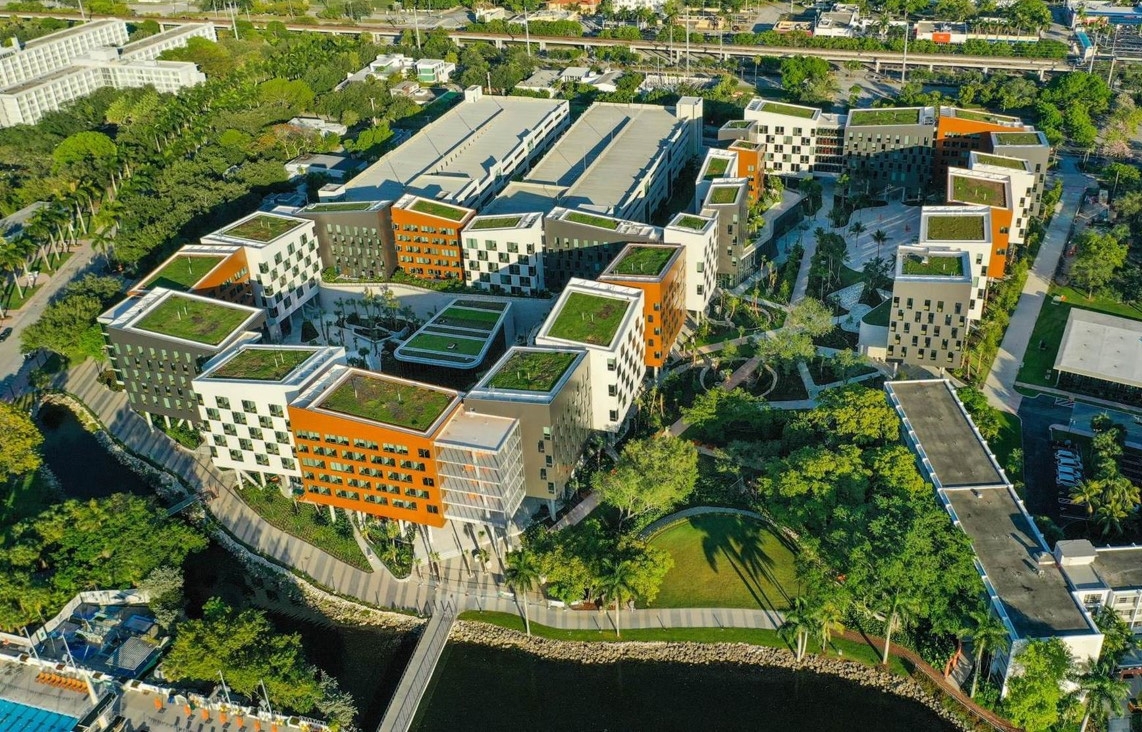 In keeping with the University’s vision to become an exemplary and excellent institution, it is embarking on a multi-phase housing plan to improve its current housing offerings for students.

“The first step in this plan is to construct a new facility on the south side of Lake Osceola so that the current number of bed spaces can be maintained during future construction and to meet increasing demand over time. With a commitment to the integration of the various aspects of campus life into a single facility, this new space will elevate the daily experiences of countless students, faculty, staff and visitors who pass through this central site every day.

The village will activate the surrounding area and highlights the tropical lushness of the Coral Gables campus. It will excite the campus community and become a destination in and of itself. Most of all, this new village will add to the sense of place and belonging for those who live, work and learn there.” ~ UM Student Affairs New Student Housing

Designed by Arquitectonica with landscape architecture by ArquitectonicaGEO, Lakeside Village opened to students in August 2020. Phase 1 is the University of Miami Lakeside Village Student Community Housing, which fronts Lake Osceola, the core and heart of the Gables Campus. Filled with a lush and native tropical garden, the 12.5-acre mixed-use student housing complex property stretches from the campus lake southward to Ponce de Leon Boulevard and westward to Merrick Drive.

With plantings on three levels, the Lakeside Village is comprised of 25 interconnected greenroofed buildings and a multitude of outdoor spaces including a grand courtyard, study spots, recreational spaces and outdoor terraces.

“With its quintessential Miami Modern living community, integrated academic and student services, flexible event and recreational spaces, and locations for retail operations all on one site, the 600,000-square-foot lakeside Student Housing Village will redefine what it means to live, learn and work at the University of Miami. In addition to five floors of student housing for more than 1,000 students, the first floor and mezzanine level of the main structure are planned to serve as retail, event and office spaces.

The primary intent of this project was connection: between the school of architecture and the dormitories, between the new student housing center and a pool, between a place to learn and a place to live. Referencing the 60s-era Biscayne Bay structures of Stiltsville, Arquitectonica arranged the residential cubes into a necklace of forms strung together to produce a single undulating structure containing a theater, bicycle center, post office, residential administration office, and a sand volleyball court. The residential building itself is large, with multiple core lobbies that touch the ground underneath what becomes essentially a canopy; the architecture traverses sky and ground, at once ethereally floating and connected to the ground.” ~ Arquitectonica

The University of Miami’s new Lakeside Village student community housing demonstrates some of the best aspects of environmental sustainability in the built environment, as well as some of the most challenging scenarios.  With its location on a sensitive coastal watershed in a hurricane zone, every aspect of the building operations must be accountable to the environment.

The university listened to students who want more sustainable campuses in the colleges they choose to attend.  In this case, the result is a beautiful marriage of green infrastructure and an enhanced human environment for over 1,000 students.  The 25 new buildings include passive solar cooling, rain gardens, and a LEED Gold certification pending.  Best of all, each roof is covered in vegetation within 10” depth of growth media – the first of their kind in Miami.  The unique challenges of these many green roofs include their steep slopes, and their location right in the center of a hurricane super-highway.

There are 25 separate Henry-GRO system green roofs which range in size from 3,259 to 627 square feet each; 7 have decks with a 4/12 slope and the rest have 3/12 slope.  Each is sloped in a different direction, and on a diagonal (with one corner raised rather than two).  Standard drainboards and root barriers do not have sufficient slip resistance in this scenario.  Instead, a GRO Capillary Action Mat was used directly over the Henry 790-11 waterproofing.  It provides enough surface area and contact to resist sliding, while also preventing root intrusion and facilitating the lateral flow of stormwater toward the internal drains.

In addition to slip resistance on the steep slopes, a major concern for these buildings are their location in a hurricane zone.  In fact, until this project was installed, no other traditional green roofs had been allowed by Miami-Dade County for fear of wind uplift.  To address slope and wind concerns, a GRO Slope Stabilization System was used, consisting of steel cables and wire mesh within the growth media, anchored down into the deck, and also bolted to the parapets.  Two layers of mesh were used for the roofs with slopes greater than 15%, as well as curved cleats attached to the mesh to contain the soil into within narrow zones.  A wind erosion mat was installed on top of the growth media, and then it was hydro-seeded with beneficial grasses that will add even more wind resistance as their roots grow in.  The entire system was set back within the outer roof parapet walls, using a separate inner parapet wall structure which eliminates the wind scour and uplift concerns at the roof edges.

Until now, Miami-Dade only gave Notice of Approvals on “green roofs” with a minimum of 24” depth of growth media for the extra weight, out of concern of the wind carrying it away during the inevitable next hurricane.  The wind concerns virtually eliminated the possibility of green roofing as we know it in Miami, until it was fully demonstrated that the Henry-GRO system would be more than capable of withstanding a Category 5 hurricane.  After an extensive review by Cronin Engineering, the firm working with Miami-Dade to calculate all components when combined, they agreed that the system was safe for High Velocity Hurricane Zones and the project received the NOA from Miami-Dade County in February 2019.

The University of Miami Lakeside Village Student Community Housing is a major breakthrough for green infrastructure in Miami, and hopefully these will be the first of many green roofs in the city.

Multi-discipline coordination and construction administration were main drivers of the University of Miami Lakeside Village Student Community Housing’s successful design intent implementation which improves biodiversity and ecology on the ground level, elevated gardens, as well as on the green roofs at approximately 70 feet high.