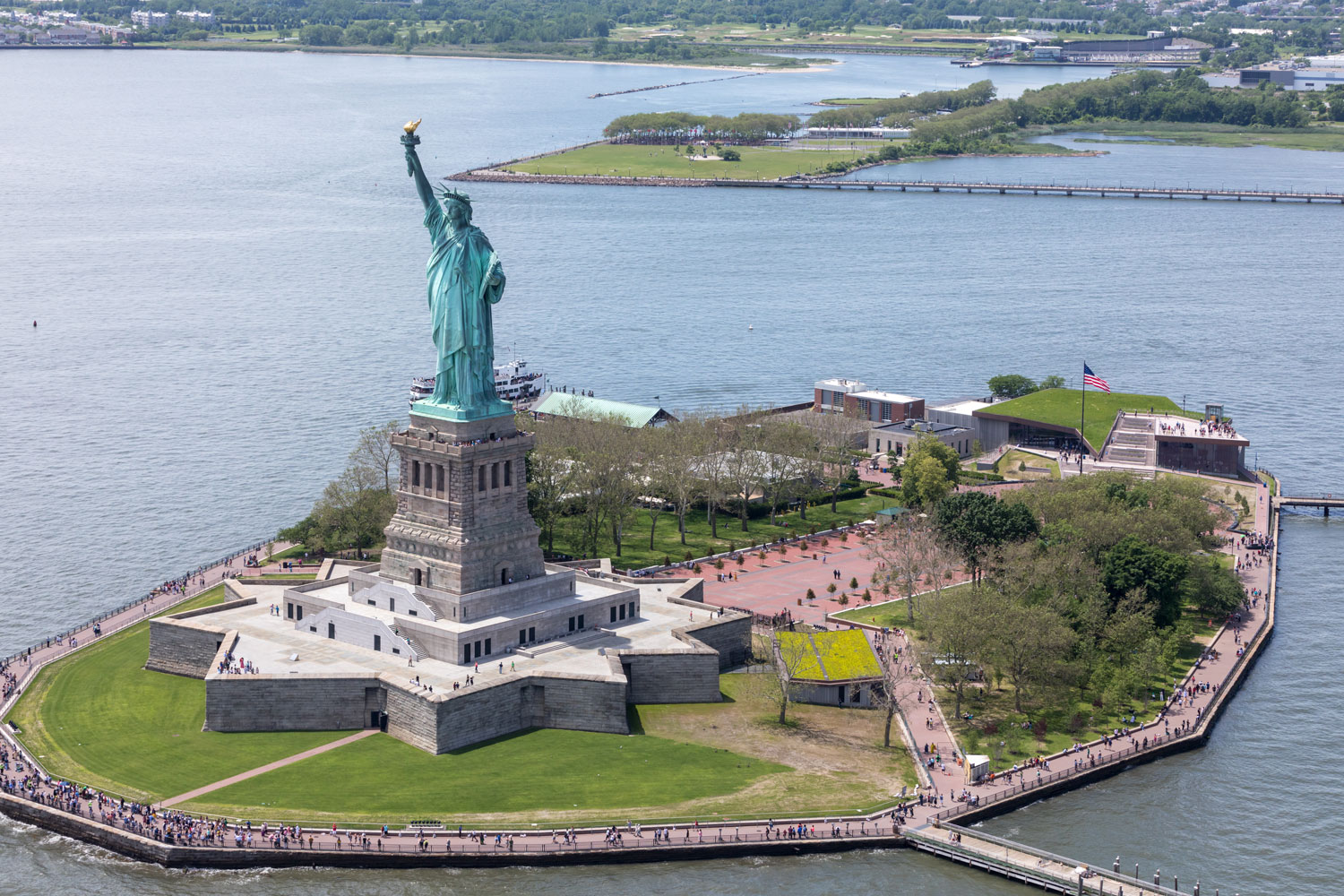 Drawing in 4.5 million visitors a year, the Statue of Liberty was a gift of France on the centenary of American independence. Imagined by French law professor and politician Édouard de Laboulaye, the Statue of Liberty was designed by sculptor Frédéric-Auguste Bartholdi and its metal framework built by Gustave Eiffel. “Liberty Enlightening the World” (La Liberté éclairant le monde) was dedicated on October 28, 1886, gracing the entrance to New York Harbor and welcoming millions of immigrants to the United States ever since. Designated as a U.S. National Monument in 1924 and administered by the National Park Service, the Statue of Liberty was added to UNESCO’s World Heritage List in 1984.

Rising 305 feet tall from its pedestal to torch, which measures 29 feet, the Statue of Liberty weighs 450,000 pounds and 88 tons of brass were used in its structure.

The new Statue of Liberty Museum recounts an aspect of the colossal copper neoclassical sculpture’s long-forgotten history: the Statue of Liberty was created to celebrate freed slaves, not immigrants, and Lady Liberty was inspired by the end of the Civil War and emancipation. The connection to immigration came later.

“Ellis Island, the inspection station through which millions of immigrants passed, didn’t open until six years after the statue was unveiled in 1886. The plaque with the famous Emma Lazarus poem — “Give me your tired, your poor, Your huddled masses yearning to breathe free” — wasn’t added until 1903.” ~ Washington Post, 2019

Skepticism regarding the statue was felt by many. The New York Times (2019) reports that the museum “doesn’t shy away from the fact that this symbol of “universal liberty” was far from a reality for people of color and women during the late 19th century and for decades afterward.”

Liberty Island visitors can now experience the new Statue of Liberty Museum to examine its history and peruse permanent and rotating displays of statue-related artifacts, a three-room immersive theater, and Lady Liberty’s original 1886 torch. Designed by FXCollaborative, construction of the $100 million Statue of Liberty Museum started in early October 2016 and the museum opened on May 16, 2019, aiming for LEED Gold.

The Statue of Liberty Museum was funded privately by fashion designer and philanthropist Diane von Fürstenberg, Michael Bloomberg, Jeff Bezos, Coca-Cola, NBCUniversal, the family of Laurence Tisch and Preston Robert Tisch, Mellody Hobson, and George Lucas. As of groundbreaking, Diane von Fürstenberg headed the fundraising for the museum and the project raised more than $40 million.

“She is an icon, a national treasure, and one of the most recognizable figures around the globe. Millions who cherish her ideals make the journey every year to experience her history and grandeur in person. She is Lady Liberty, a symbol of freedom, a worldwide icon inspiring hope. The Statue of Liberty Museum™ represents an exciting new chapter in Lady Liberty’s story of freedom. The museum gives millions more an opportunity to enjoy the Statue of Liberty experience … and we are relying on your support.

The Statue of Liberty Museum’s design gives the appearance of rising up from the earth carrying with it a beautifully planted Garden Roof Assembly from American Hydrotech completed with native grasses.

“The museum’s defining gesture is the lifting of the park itself, which creates a new, naturalized habitat in place of a traditional building.

While the Statue of Liberty remains New York’s most iconic monument, the museum housed in its base had long proved inadequate for the thousands who visit each day. The new Statue of Liberty Museum, envisioned as an extension of the island’s landscape in Liberty Park, is accessible to millions of new visitors without restrictive security clearances. Its angular forms and spaces are shaped by expansive views and the irregularity of the water’s edge. The design enhances the site with multiple planted areas, an extensive green roof, and bird-friendly glass. Materials native to the Island and used in the original construction of the Statue of Liberty and Fort Wood, including granite, bronze, and a variety of native vegetation, enrich the interior and exterior spaces.” ~ FXCollaborative

Made with 100% NYS Materials, the special blend of LiteTop American Hydrotech growing media by Naturcycle went over to Ellis Island on a barge via Super Sacks. The plant materials are a meadow mix with a cover crop to stabilize the plantings on the top and on the sloped areas. Hydrotech’s MM6125 membrane and components were used in all of the roof and adjacent planter areas as well.

“The landscape will seamlessly merge with the building, extending vistas rather than ending them, and creating a new, naturalized habitat in place of a traditional building. QRP is designing the landscape for the 20,000 square-foot green roof, which will be planted with native meadow species.” ~ Quennell Rothschild & Partners

As visitors ascend the Statue of Liberty Museum stone staircase, the sloped green roof meadow, achieved using Hydrotech’s GardNet, is seen on one side and a viewing platform appears on the other. New York Green Roofs was a consultant on the living roof’s plant palette.

The Roof Deck atop the Statue of Liberty Museum offers the accessible viewing platform from which visitors may take in sweeping 360 degree views of the iconic Statue of Liberty and New York Harbor and the New York skyline. The Museum rooftop may be closed due to a variety of inclement weather conditions including high winds, snow, ice, rain, etc.

“It is a real honor for Hydrotech to be a crucial part of this special public building project and to know that the artifacts inside will be preserved for all to see for generations to come.” ~ Richard Hayden, Garden Roof and Blue Roof Department Manager, American Hydrotech

Having partially reopened after lifting some pandemic protection measures, currently (as of June, 2021) Liberty Island grounds and concessions are open with certain capacity restrictions in place. The Statue of Liberty Museum is open with some restrictions, but the Statue’s Pedestal and Crown are currently closed.

The Statue of Liberty Museum has been honored with Society of American Registered Architects (SARA) New York Council’s 2020 Innovation and Sustainability Award, recognizing the project’s resiliency to adapt to its marine climate while being a beacon for cultural integrity.