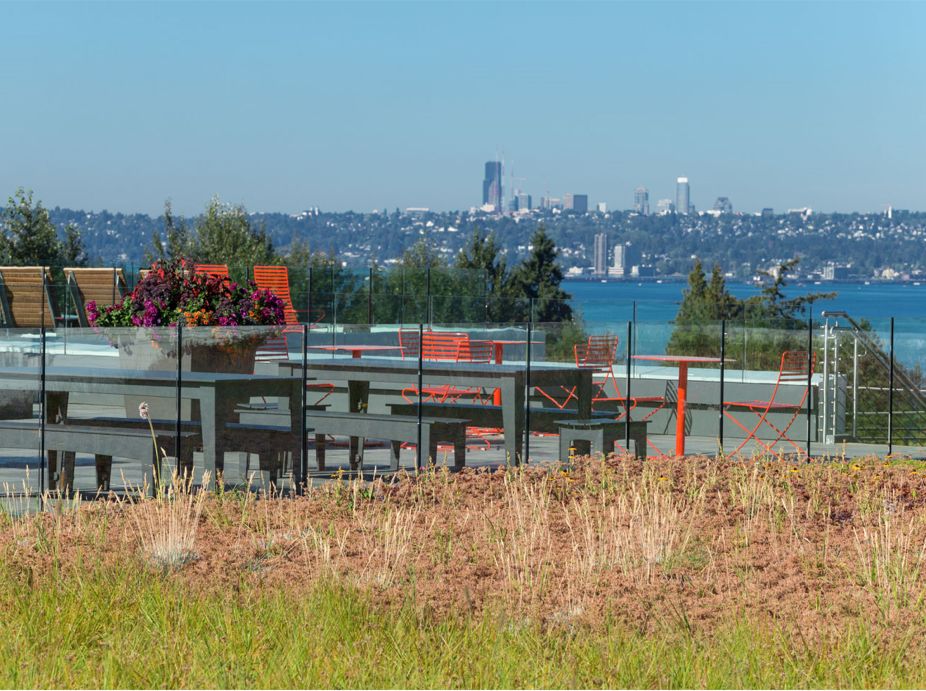 Learn about the following companies in The Greenroof & Greenwall Directory: Etera® and Tournesol Siteworks.

Designed by Seattle-based Thomas Rengstorf & Associates (TRA), the courtyard has a water feature on its campus that includes stone barriers that break up and add visual interest. TRA designed the site’s pedestrian paving, furniture, hardscape, and planting. Indeed, more than half the site is covered by rooftop plantings.

As part of the company’s Phase II expansion plan, the green roof was designed by landscape architect Forrest Jammer of TRA who considers a green roof yet another design opportunity on the canvas of a total landscape. TRA selected DIADEM® USA as the green roof system for many reasons, especially for the quality to engineer a roof that would not only provide an aesthetically pleasing retreat, but also complement the overall sustainability goals of the expansion.

The amenity space on the roof includes seating offering sweeping views of the colorful foliage on the curvaceous patterns on the green roof as well as in raised planter boxes that were custom fabricated to hold a greater variety of taller plants.

The green roof was initially designed as a combination of Etera SEDUM TILE mats and sedum and perennial plugs. Ultimately, Etera custom grew a SEDUM TILE mat with the specified mix of sedums as well as the accent perennials grown into the mats.

A combination of grasses and flowering perennials were used as accent plants including Pennisetum, Achillea, Allium, Festuca, Penstemon and Rudbeckia. A year after installation, the accent perennials are growing strong with their living mulch of sedum groundcovers. The result is a green roof with the instant vegetative coverage of a SEDUM TILE mat and the color, texture, and interest of a plug roof showcasing panoramic vistas of the lake, mountains, and beautiful downtown Seattle.

Completing the green architecture at the Kirkland SRM Development is the Tournesol Siteworks greenwall on one of the outer walls. The greenwall included the Tournesol Sitework VGM Modular Living Wall System as well as the VertiGreen 3D Trellis System. The varied foliage has an undulating look, just one of the many design elements TRA incorporated into the living landscape at SRM Development.