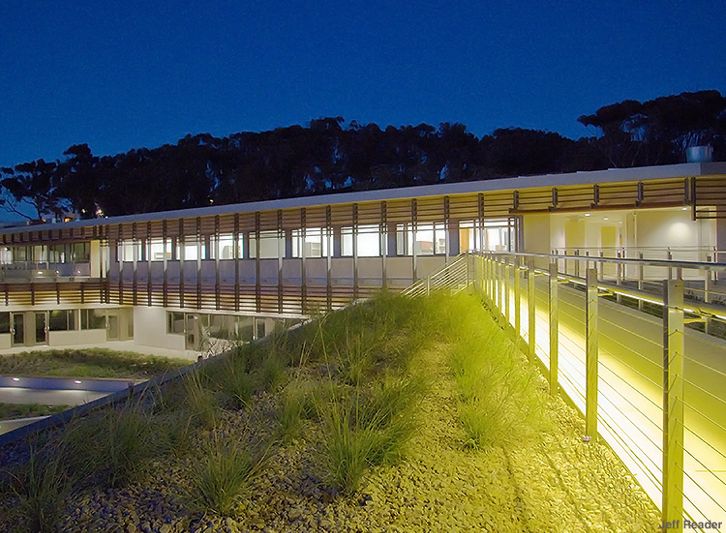 The NOAA La Jolla Laboratory Replacement Project, UC San Diego is located at 8901 La Jolla Shores Drive, La Jolla, CA 92037; 858.546.7000. The building is open for visits but you must sign in first and receive a parking permit – read Directions to the SWFSC’s La Jolla Shores Laboratory. Visit the La Jolla Laboratory Replacement Project website, the Innovative Design page, and the Green Roof: Living Architecture page; download the Green Roof PDF. Watch the 2:17 video NOAA La Jolla Southwest Fisheries – Project of the Week 9/1/14 from Greenroofs.com on the greenroofsTV channel on YouTube. Read the April 2014 Ocean Science by Guy Horton in Metropolis Magazine; October 4, 2013 A Lab with a View with beautiful photos by Darren Bradley in his blog Modernist Architecture; the August 22, 2013 NOAA Fisheries Celebrates Opening of New La Jolla Laboratory and the SWFSC’s La Jolla Laboratory will be LEED-Gold certified, both from NOAA Fisheries Service.

Watch the February 6, 2014 26:47 video of the PBS episode of A Growing Passion: Green Roofs hosted by Nan Sterman on Vimeo where NOAA La Jolla Southwest Fisheries Science Center Laboratory Replacement Project was profiled along with an interview with Jeff Bruce at about 13:46-20:49; and the 3:49 NOAA La Jolla Laboratory Replacement Project / Gould Evans on Vimeo. See the case studies from Gould Evans with photos and synopsis, Jeffrey L. Bruce & Company, and Wimmer, Yamada, and Caughey. Read the Regents Committee on Grounds and Buildings Preliminary Review of Design of March 17, 2009 here.

The new NOAA La Jolla Laboratory Replacement Project replaced the previous 1960s NOAA Southwest Fisheries Science Center facility situated directly opposite La Jolla Shores Drive, located on a site of significant erosion as the structure had been built into the hillside of a 200-foot-high coastal bluff. The new NOAA La Jolla resides on a previously undeveloped 3.3 acre site located in the Scripps Institution of Oceanography neighborhood of the University of California at San Diego campus. The new building site is perched at the head of the underwater La Jolla Canyon and adjacent to the San Diego-La Jolla Underwater Park and Ecological Reserves, which spans approximately 6000 acres of nearshore habitat. The NOAA move consolidated 35+ labs, 5 shops, 4 libraries, 1.5 million specimens and 277 people from two locations.

Thirty percent of the roof is covered by vegetation on a series of nine greenroofs. In addition to the living roofs, terracotta sun shades, photo-voltaic panels, and a state-of-the-art 528,000 gallon ocean technology tank (where scientists fine-tune equipment before oceanographic research voyages) propel the new headquarters in setting a new benchmark in scientific building design.

Inspired by the topography of the site and Pacific Ocean and the culture of southern California, the 100-foot drop in elevation posed a challenge for the architects, Gould Evans. “Projected as a continuation of the submarine canyon topology below, the stepped terrace design opens to the ocean below. The design increases the availability of views for resident researchers and visitors. Seen from the street as it curves down the hill, the design miraculously minimizes the appearance of a tall building and maintains public view corridors out to the Pacific,” (NOAA SWFSC).

The project design is a single building comprised of five levels terracing into the steeply sloped site to create the lowest profile possible to maintain views from the La Jolla Shores Drive view corridor. Four levels are above ground with one level of underground parking. The roof is treated as an exterior elevation with sustainable greenroof and photovoltaic panels.

“The design of the new building incorporates many sustainable strategies such as elaborate water retention systems, recycled materials and vegetated roofs planted with California coastal plantings in an effort to restore the endangered native ecology on the building rooftops. Jeffrey L. Bruce & Company designed a series of green roof gardens for the facility which function as a series of accessible stepped landscape terraces advancing the agency’s mission of public environmental education. The challenge was providing native plant material design, agronomic green roof soils, and water distribution systems in a narrow profile on a roof which mimics the ecology of the coastal dune community. The intent was to allow the green roofs to restore the natural processes and habitat which originally occurred on the site,” (Jeffrey L. Bruce & Company).

The greenroof growing media is comprised of a mixture of locally available components designed to benefit from the moderate temperatures and semi-arid climate of La Jolla. With an average depth of 23 cm (9”), the primary component is locally procured sand which ensures proper drainage. Native San Diego county and coastal chaparral plants were chosen, arranged in mosaic patterns to showcase their shape, color and diversity, and planted to enhance the corresponding viewing angles. Plants on Level 3 include velvet cactus (Bergerocactus emoryi), coast prickly pear (Opuntia littoralis), and Shaw agave (Agave shawii). On Level 4, plants include woolly blue curls (Trichostema lanatum), rock rose (Helianthenum scoparium), and deer grass (Muhlenbergia rugen). To supplement a potential water deficiency during periods of drought, the greenroofs have an automatic irrigation system, with excess rainwater captured by drains found in each of the greenroof areas.

“In science when a solution or breakthrough is reached, the comment is ‘oh that was obvious.” This building has a sense of inevitability, a building that is what it should be. This is the most creative design I’ve seen as a member of this board.” ~ Robert Hamburger, University of California San Diego Design Review Board Member and former Dean of Faculty at the UCSD School of Medicine, via Gould Evans

“With the little bit of rain that we get every so often this winter, the sage smells utterly fabulous and fills the walkways with the scent of the chaparral. The hummers are everywhere and the first blossoms of spring are filling the courtyard with yellows and purples. What a pleasure to work with JBC and what an awesome outstanding over-the-top job.” ~ Sarah Mesnick, SWFSC Science Liaison, via Jeffrey L. Bruce & Company