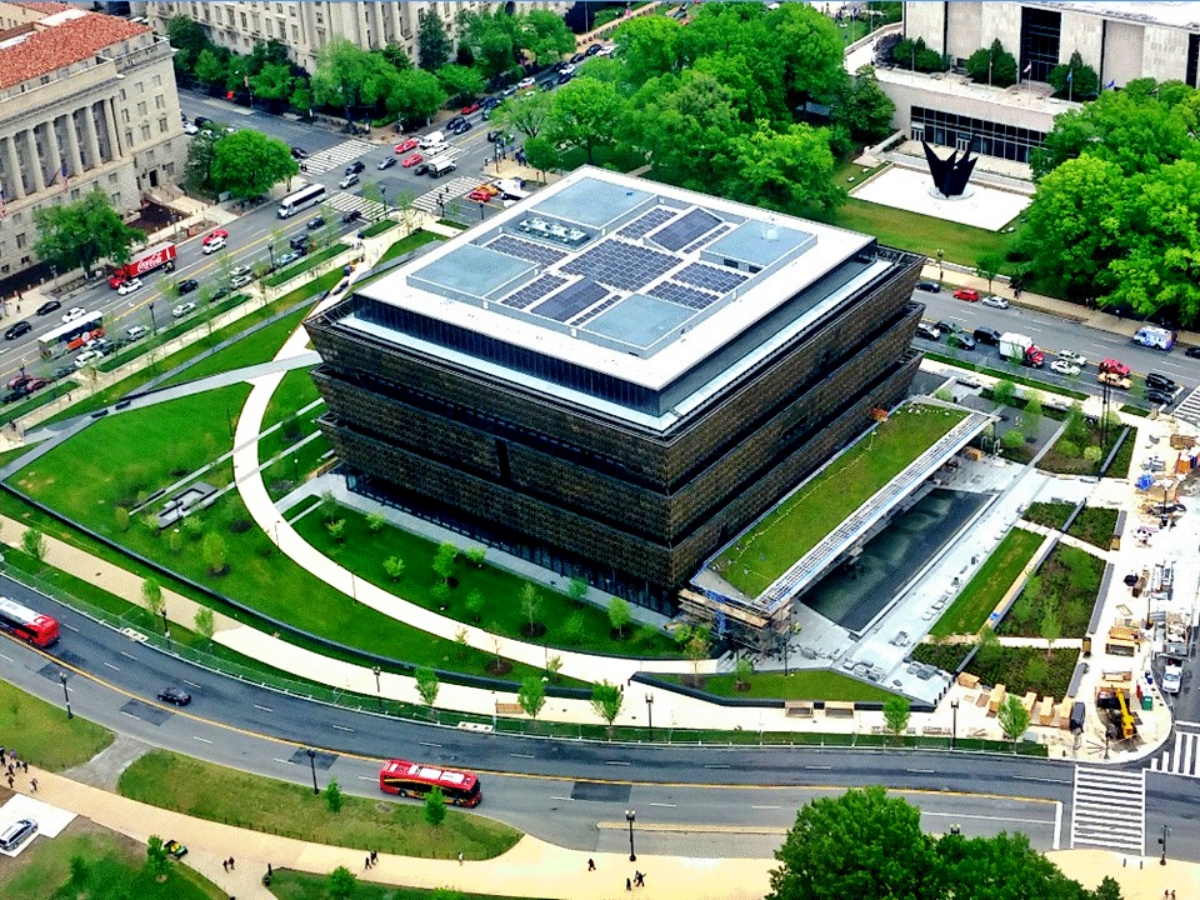 Visit the National Museum of African American History and Culture (NMAAHC) website, specifically their Explore the Building; 202.633.1000. Take an Interactive Tour of the building. Also see the Google Arts and Culture webpage.

Situated on five acres on the last available spot on the National Mall in Washington, D.C., the $540 million National Museum of African American History and Culture (NMAAHC) seeks to understand American history through the lens of the African American experience. The Smithsonian’s first LEED Gold project, the museum is located less than a mile from where Martin Luther King, Jr. presented his “I Have a Dream” speech.

The museum was first proposed by black Civil War veterans 102 years ago and had received much recent debate and opposition from legislators since 1985. After after 13 years and the approval of a federally funded study commission’s final report in 2003, the National Museum of African American History and Culture was finally approved by an Act of Congress. Championed by U.S. Senator Sam Brownback (R-KS, deceased) and Georgia representative (D) and civil rights campaigner John Lewis, among others, it opened on September 24, 2016. President Barack Obama dedicated the museum delivering a soaring speech to thousands at the ceremony on National Mall, and Representative Lewis called the museum a place that celebrated “the dignity of the dispossessed.”

The NMAAHC has a total of 10 stories, five above and five below ground, with almost two-thirds of the space located underground. The curators used this natural break as a way to cover more than 600 years in two very different ways, and visitors are encouraged to start at the bottom level and work their way up. The museum’s interior is composed of five large gallery spaces containing over 35,000 artifacts related to African American history, community, and culture, and covers slavery, civil rights, sports, historic black communities, music, visual arts, and much more.

“Underground, a stark path winds chronologically and unflinchingly from slavery through civil rights and beyond. Aboveground, bold, busy galleries celebrate some of the cultural contributions African Americans have made to the country and the world.” ~ Washington Post, 2016

The NMAAHC’s highly symbolic presence on the National Mall is matched by the symbolism of the building itself. Lead designer David Adjaye and lead architect Philip Freelon, together with their architectural team Freelon Adjaye Bond/SmithGroup, won the international competition in April 2009 to design and deliver the museum to the people of the United States. The NMAAHC building is African American history and culture writ large on the National Mall of the United States. Its location and its design represent the past, present, and future of the African American experience in ways that are both tangible and symbolic.

“Looking north from the building, visitors can see the White House, which made history in 2008 with the election of President Barack Obama. Rising to the east beyond the National Mall and other Smithsonian museums is the U.S. Capitol, seat of the nation’s legislature. And to the south and west are monuments and memorials to Thomas Jefferson, Martin Luther King Jr., Abraham Lincoln, and George Washington, whose contributions to African American history and culture are told in the museum.” NMAAHC.

According to David Adjaye, the lead designer of the Freelon Adjaye Bond/SmithGroup (FAB) team, his approach was built on three cornerstones: the “corona” shape and form of the building; the extension of the building out into the landscape – the porch; and the bronze filigree envelope.

The 420,000 square foot building has a three-tiered inverted step pyramid shape and is inspired by the Yoruban Caryatid, a traditional wooden column which features a crown or corona at its top. Reaching toward the sky, the corona expresses faith, hope and resiliency. The above-ground floors are surrounded by the unique bronze-colored cast aluminum architectural scrim of 3,600 panels. Internal to the building, the corona forms a perimeter zone which surrounds the primary galleries. Daylight enters this zone through patterned openings in the bronze cladding and through skylights. At night, the corona glows, presenting stunning views of the museum from a variety of vantage points in and around the Mall.

The museum’s distinctive form draws on familiar imagery from both African and American history, paying homage to the intricate ironwork that was crafted by enslaved African Americans in Louisiana, South Carolina, and elsewhere in the American south.

Below the corona, visitors enter the museum through a grand “porch” at the south (National Mall) side of the building while a secondary entrance is provided on the north (Constitution Ave.) side. The Porch is an outdoor welcome area and 175-foot-long steel and concrete canopy with its upward tilt shades the south side of the NMAAHC as well as welcomes visitors. A shallow fountain keeps the area cool underneath.

Arriving from Constitution Avenue, much of the north lawn is a very large intensive greenroof which covers the galleries below and the glass oculus that juts up from the grounds to help illuminate the underground portions.

The landscape is an integral part of the threshold experience, establishing the site as a critical component of the design while providing perimeter security and sustainable stormwater management. Phil Freelon, the museum’s lead architect and Brenda Sanchez, Senior Architect and Senior Design Manager for the Smithsonian Institution, designed an underground dual-cistern system. In one cistern, water is filtered and then reused elsewhere in the building, including toilet flushing and irrigation. It’s estimated the museum is saving 8 million gallons of water thanks to this recycling. After saturation, the second cistern absorbs gradually releases that water back into the soil. “Sanchez says NMAAHC’s system is saving Washington, D.C. roughly a million gallons of water a year. (It’s not for nothing that LEED awarded the museum a perfect score in its water category.),” SmithsonianMag.com, 2018

The below ground Central Hall is the primary public space within the building and the point of orientation to the museum’s offerings. As visitors move through this generous space which includes a dynamic multi-media display, the cafe and museum shop are easily accessible. Softly lit wooden planks form the ceiling of the Central Hall – a space which is intended to be captivation and inspiring.

From ground level to the rooftop, the series of landscaped spaces are intended to embody both a metaphorical and physical narrative, with the presence of water as a constant and dynamic companion throughout the journey. A reflecting pool at the south entry brings the museum into the view of the National Mall, with calm waters meant to invite all to approach.

Sustainability was a primary consideration as the design team moved from the initial concept through the development of the schematic design. The new NMAAHC stands as a demonstration of best practices in environmental design. Some of the highly influential African-Americans highlighted within the NMAAHC are Barack Obama, Frederick Douglass, Harriet Tubman, Rev. Henry Clay Anderson, James Baldwin, James Brown, Mae Reeves, Malcolm X, Marian Anderson, Dr. Martin Luther King Jr., and Muhammad Ali, to name a few. While the specific stories of persecution and struggle, resiliency and triumph are presented in the museum’s exhibits, the building itself stands as a powerful testament to the centrality and relevance of African American culture and history.

Phil Freelon, the project’s lead architect says, “It is a museum for all of us, not just African-Americans. There is a lot to be learned about ourselves as Americans.”

Among numerous others, the National Museum of African American History and Culture project won a 2019 AIA Institute Honor Award for Architecture:

“The culmination of a decades-long journey toward commemorating black history and culture, the new museum establishes strong connections to its site on the National Mall in Washington, D.C., and the nation’s long-overlooked African American heritage. Occupying the Mall’s last buildable parcel, the museum is a compelling home for the important and emotional journey that awaits visitors.

In response to the criteria established by the Smithsonian, the design was driven by themes of resilience, memory, and movement. Careful consideration resulted in a building that speaks about the identity of a marginalized group of people who have played—and will continue to play—an important role in the United States.” ~ AIA