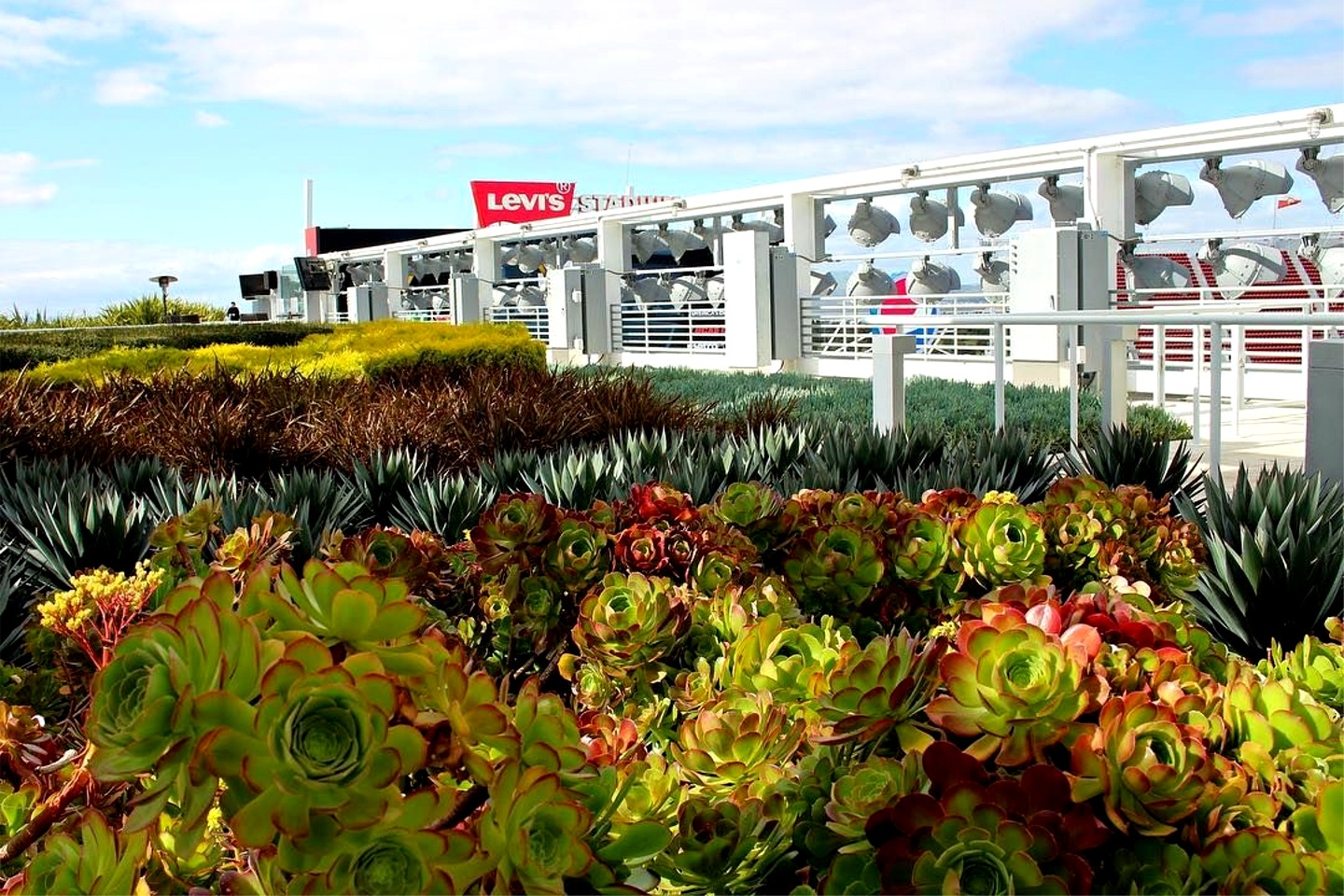 Learn about American Hydrotech in the Greenroofs.com Directory.

Levi’s® Stadium is a football stadium in Santa Clara, California which serves as the current home of the San Francisco 49ers of the National Football League. Levi’s Stadium is a multi-purpose facility with the flexibility to host a wide range of events, including domestic and international soccer, college football, motocross, concerts and various civic events, and is expandable for major events such as Super Bowl 50 which was hosted here in February of 2016. The $1.27 billion venue has 1.85 million square feet, seats approximately 68,500 and features 176 luxury suites and 9,000 club seats.

When the gates of Levi’s Stadium opened in August 2014, the stadium was the first United States professional football stadium to have achieved LEED Gold certification. One of the most unique features of the facility is the NRG Solar Terrace green roof atop the 5-story Suite Tower on the west side of the stadium. The three solar bridges, connecting the main parking area to the stadium, include hundreds of solar panels. Visitors and guests may view a live dashboard display featuring current energy measurements, water and air monitors, and other dynamic green features as the building operates daily. The dashboard is located inside Levi’s Stadium in between the 49ers Museum Presented By Sony and 49ers Team Store. See About Levi’s(R) Stadium and more about its sustainability features.

The installation of the 1,186 solar panels on the roof and on pedestrian bridges connecting the parking lot to the park generate 375kW of power at Levi’s Stadium – as much renewable energy as it will consume on game days. “The iconic feature of the stadium is the massive Suite Tower on the west side, which will be topped by one of the stadium’s most distinctive features. The tower will have a 27,000 square foot ‘green roof’ that will provide building insulation as well as 16 species of vegetation native to the Bay area for the concessionaires, who will utilize same within local farm-to-table menus. This is also the main location for the solar panels and together comprise the NRG Solar Terrace. NRG designed the roof installation using a total of 544 SunPower E20 Series panels in a canopy framework,” (Mosaic Blog, 2014).

“The patterned planting design of the green roof provides year-round interest, reliability, and compatibility with the Bay Area climate and help with climate control of the office and press-box facilities below. The decks adjacent to the green roof are available on game days for parties and viewing of the activities on the field,” (The Guzzardo Partnership, Inc.)

Fans attending San Francisco 49ers home games at the Levi’s Stadium in Santa Clara, CA, experience football in the most eco-friendly, and sustainable facility in the league. While state of the art technology is used throughout the stadium, the structure itself is kept watertight with various applications of Hydrotech’s Monolithic Membrane 6125.

More than 350,000 sf is used in concourse waterproofing, along with 60,000 sf in below-grade vertical applications. A 38,000 sf amenity deck is accessible to fans at the suite level on the west side of the stadium. 25,000 sf of Garden Roof Assembly by American Hydrotech combined with 23,000 sf of Ultimate Assembly pavers creates an inviting space that will be enjoyed by fans for years to come.

“Just like the pirate ship at Raymond James Stadium or the hole in the roof at the old Texas Stadium, the green roof atop the suite tower will serve as Levi’s Stadium’s distinguishing feature. “Every aerial shot will kind of showcase that,” [49ers president Paraag] Marathe said.

“Inspired by discovery museums, that living roof not only adds aestheticism but also has an ecological function, which provides insulation, limits water run-off and reduces the heat footprint. The 49ers also tout the 20,000 square feet of solar panels in and around the stadium. Over the entire year, energy collected from those panels will be slightly greater than what is used during all 10 home contests,” (ThePostGame.com, 2014). According to the 49ers, reclaimed water is used for both potable and non-potable uses such as the playing field irrigation water. As it is connected with Santa Clara’s recycled water system, 85 percent of the water used at the stadium is recycled.

In July 2016 part of the mostly ornamental green roof of perennials was transformed into a rooftop farm, the brainchild of Danielle York, wife of San Francisco 49ers CEO Jed York. The first to top an NFL stadium, the Faithful Farm is a vegetable and herb garden, maintained by Farmscape Gardens. Herbs, tomatoes, peppers, zucchini, leafy greens and edible flowers are among the 40 rotational crops which are harvested for use in dishes served at Levi’s Stadium in club spaces during games and at the more than 200 private events hosted at the stadium each year.

“Levi’s Stadium and Centerplate work with Hunger at Home and the Salvation Army to deliver unused prepared food to organizations that aid those in need. The produce from the Faithful Farm will contribute to this effort, helping to provide healthy vegetable-based dishes to individuals in need.” ~ Levi’s Stadium

Occupying 6,500 square feet and working with only 9″ of soil depth, Farmscape Gardens amended the farm roof with compost and biochar to maximize production. In 2017 Faithful Farm produced 500 pounds of produce per month on average (The Mercury News, 2017), and in 2018 the farm green roof yielded more than 10,000 pounds of fresh produce (Farmscape Gardens).