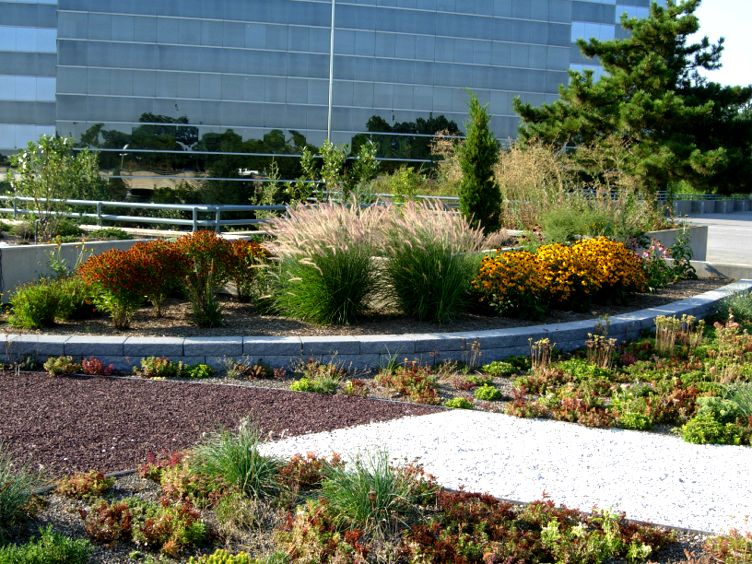 On August 4, 2008 Fairfax County unveiled its latest green initiative on top of the Herrity Building parking garage at the Government Center complex in Fairfax. This green roof demonstration project will help the county better design such eco-friendly roofs in the future, and Gregory Long of Capitol Greenroofs says, “This project took over three years to coordinate and I was pleased once funding was set aside to install the project.”

Also, the Board of Supervisors Chairman Gerald E. Connolly said, “Consistent with our Cool Counties initiative, this is another example of the county’s commitment to green building and environmental protection,” and he continued, “Green roofs are just one of the many innovative techniques we’re using to reduce greenhouse gases, improve water quality and reduce energy consumption.”

The County website states “The green roof will be monitored to see how much stormwater and pollution it absorbs. It will be compared against an unplanted area on the opposite side of the garage. Water samples will show how many pollutants are captured by the green roof, such as phosphorous, nitrogen and heavy metals. Without a green roof, these pollutants would run off into local creeks and streams.” (2008 Fairfax County News Release)

In 2007 Magco Inc., a Tecta America Company, was selected as the bidder of choice in an open-bid selection process by Fairfax County to install a 5,000 sq. ft. green roof atop an existing parking garage located in Fairfax, VA. Designed by Capitol Greenroofs, with slight modifications in the field, the green roof retro-fit allowed for between 20 and 30 existing spaces to be converted into a demonstration green roof, which was installed by Magco in September of 2007, and has been maintained by them as well.

The majority of the roof (3,500 sq. ft.) is an extensive green roof, and contains a 4″ soil media depth, with a variety of pathways for accessibility, along with various drought-tolerant sedum and succulent plants. The remaining 1,500 sq. ft. is intensive, with raised bed planters on two corners of the roof with new trees and perennials incorporated into the green roof system. An irrigation system was included, though it has yet to be used, as the vegetation has thrived throughout the entire year without additional watering thus far (as of 2008).

As one of the first green roofs installed on a public facility in Fairfax, VA, county officials are taking the initiative to compare the benefits of a green roof, particularly storm water run-off, to other parking facilities that do not have one. The Herrity Building Parking Garage Demonstration Garden will provide a basis for future policy concerning green roofs, with the intent to advance green roof development throughout the county.