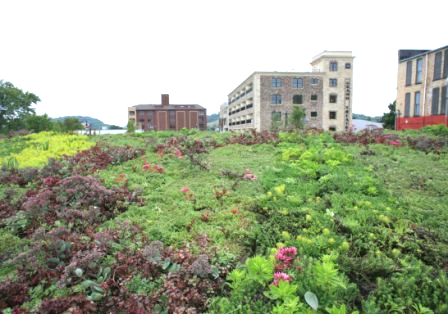 Learn about the LiveRoof modular system in The Greenroof Directory here, and see their project profile here. Read the August 22, 2007 article “Downtown dumpsters get living roofs” by Mark Brooky in the Grand Haven Tribune here. Visit Fleis and Vandenbrink at: http://www.fveng.com, Gran Haven Garden House at: http://www.ghgardenhouse.com/index.aspx, and learn about Permaloc edging at: www.permaloc.com/products/lredge.html.

The city of Grand Haven had a need for dumpsters near a shopping district and condo developments. The local residents desired a nicer view out of their second or third story windows than the local trash. Teresa Nelson, a landscape architect at Fleis and Vandenbrink, suggested a LiveRoof green roof enclosure and the team went with it. Three structures totaling over 1500sf of green roof were erected to cover the dumpsters and to create a pleasing view from the neighboring windows.

LiveRoof was chosen as the single source system, and two layers of EPDM were used as waterproofing along with a protective slip sheet. LiveRoof Edging by Permaloc was used to enclose the installation of 1′ x 2′ x 4″ LiveRoof modules. The patterns included 6 mixes of different colors and textures of sedums, laid out in a quilt-like pattern. The mixes were grown at Hortech / LiveRoof to full maturity (minimum 95% vegetation) and shipped using LiveRoof’s custom roofing racking system, the Hoppit. Installation in late August, 2007 for all three structures took less than one full working day, and the end product was a fully vegetated, seamless, green roof.