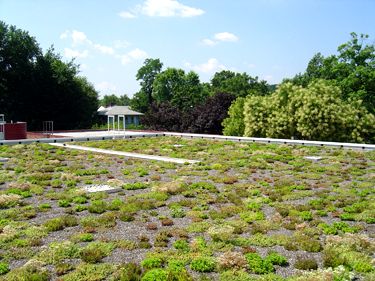 The Duncan Library Greenroof is the first greenroof in Alexandria, VA. “Named for the long-serving City Councilman and member of the Library Board James M. Duncan and expanded by 5,000 square feet, the branch re-opened on September 22, 2005. The renovations include a naturally lit adult reading area, a green roof, and an exciting new and enlarged children’s area.”Duncan?s Green Roof was sown in early September 2005 with a variety of sedum; the same plants have been sown in the landscaping of Duncan Library grounds, so patrons can see the plants of the green roof without a long ladder or a swing crane!” (Alexandria Duncan Library website, see below.)

The Duncan Library Greenroof was designed into the plans for the new library after avid citizens and city officials promoted greenroofing as a way to deal with strict storm water runoff standards. The Duncan Library is a 2,850 square foot Barrett greenroof system planted in a mosaic of four species for a meadow-like appearance.D.C. Greenworks installed a Green Roof Demonstration Garden within a narrow triangular strip in late November, 2007, and this area is accessible to everyone. Elaina Palincsar, Chair, Landscaping and Beautification Committee of the Friends of Duncan Library’s says in their December 2007 Newsletter, “We plan to support it with literature about green roofs so that it can be a resource for ecology education to the community. The garden includes grasses, sedums and bulbs, plants characteristic of green roof gardens such as the one on the Duncan Library and those planned for the Charles Huston Center and Cora Kelly School. The project became a collaboration between the City of Alexandria and the Friends of the Duncan Library; the City paid for the design and execution of the garden and Friends initiated the project and provided the bulbs.”The sedums in the Green Roof Garden are Sedum matrona (Stonecrop) and Sedum ‘Vera Jameson'(Stonecrop), similar to those planted on the roof; the grass is Sporabolis heterolepis. The roof garden also contains these Sedums: S. ternatum, spurium, sexangulare, aizoon, floriferum, reflexum, and canticola. A “Green Roof Handout” is now available at the circulation desk (Friends of Duncan Library June 2008 Neewsletter).