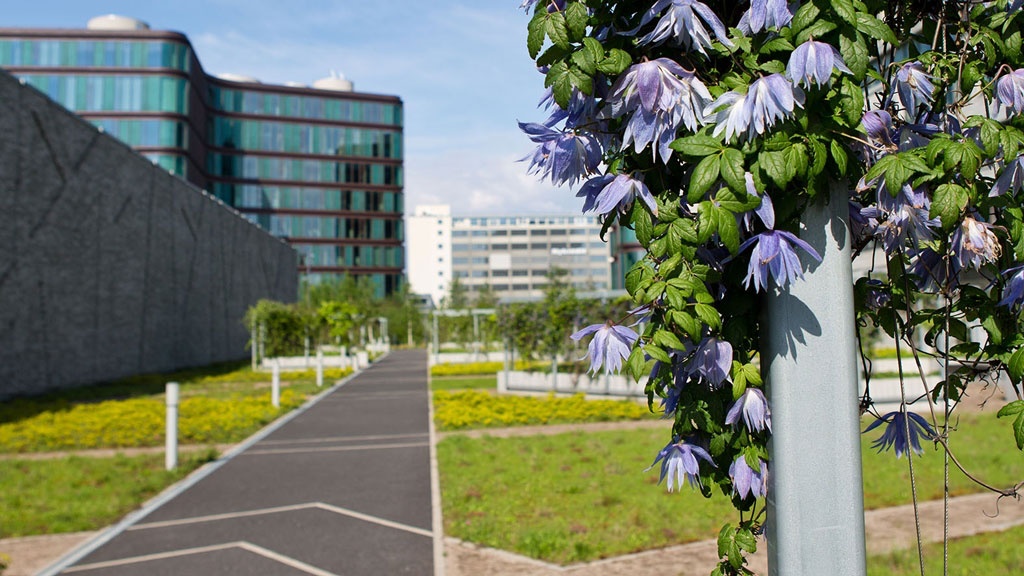 In the summer of 2009, the new Danish National Archives was completed along with a 7,200 m2 publicly accessible roof garden as an urban space on the corner of Bernstorffsgade and Kalvebod Brygge in Copenhagen. The National Archives Green Roof Garden is part of a 1 kilometer long green elevated pedestrian and cyclist park street where visitors ride a bicycle, skateboard, or just hang out and enjoy nature in the middle of the city.

In December 2005, the Copenhagen Citizens’ Representation adopted the local plan “The National Archives”, which formed the basis for a public-private partnership to build the new building and roof garden on the site that previously housed the freight station at Kalvebod Brygge. Originally, the idea was that the partnership OPP Pihl Arkivet A / S would be responsible for financing and operation for 30 years. However, E. Pihl and Søn went bankrupt in 2013, and the facility is now administered by the Danish Agency for Castles and Cultural Properties.

The roof garden constitutes a new recreational urban space for the benefit of the citizens and contributes to giving a green boost to one of the busiest stretches in Copenhagen. Part of the complete raised pedestrian area, the new roof garden will eventually link Bernstorffsgade and Knippels Bro. The roof garden, called “The Green Strip,” is located close to the harbor, with direct views of the harbor bath on the other side of the water.

“The green roof garden acts as a green pedestrian footpath and cycle path which links Bernstorffsgade and SEB Bank’s new registered office to the north with Tivoli Hotel and Congress Centre to the south. The geometry of the roof garden is an interpretation of the spectacular reliefs in the new Danish State Archive walls, which divide the space into fields of path systems, lawns and planted surfaces, forming an ornamental pattern. These fields create variation in respect of the colour, texture, function and use of these areas. The shapes of the area and walls will be seen by people in the roof garden and also by people from the windows of surrounding buildings, and provide a complete experience.” ~ Water Sensitive Urban Design in Denmark

The primary purpose of the Danish National Archives Green Roof Garden is to provide a pedestrian passage for the public, and to create a quiet garden in a central area of Copenhagen, close to the Port of Copenhagen and the Central Station. The greenway adds a recreational and landscape space between the area’s large buildings. The roof garden increases biodiversity, collects rainwater and helps stabilize the temperature of the archive buildings.

Designed by landscape architecture firm Schønherr, special emphasis was given to the growing media and drainage for water retention.

“With the use of special soil, layers of crushed brick and water reservoir plates, rainwater is retained so that the amount that is led to drains is reduced or delayed.” ~ Schønherr

The plants in the Danish State Archive roof garden provide a rich diversity of species with over 40 different plant varieties including ground-covering perennials, sedum, ornamental grasses, bulbs, and climbing plants.

“60-80% of the rainwater that hits the National Archives in Copenhagen never reaches the sewer system, but evaporates or is absorbed by the plants on the building’s 7,200 square meter roof garden. The remaining part of the water is delayed, so that the building as a whole has a minimal load on the sewer system in the event of heavy rain. At the same time, the building is part of a new green area in Copenhagen, and the garden constitutes an attractive recreational urban space.” ~ Klimatilpasning.dk

The weight load on the National Archives Green Roof Garden was the biggest challenge for structural engineer Malmos Anlægsgartnere. The minimum load of 250 kg/m2 and a maximum load of 580 kg/m2 was determined and these weight requirements governed the choice of vegetation types on the structure. A total of 3,000 cubic meters of material was hoisted in with a crane at one end of the roof and then distributed with wheelbarrows.

The long, elevated green roof is also referred to as “Copenhagen’s High Line,” but according to Steven L. Cantor is quite different in concept and execution.

“About one third of its length is a canyon-like space between the imposing, stark, and impenetrable walls of the Archive Building, whose solid facade affords no entrances. So, quite unlike New York City’s High Line, no pedestrian traffic is generated by the architectural uses adjacent to it. At the southern entrance, a pedestrian climbs slowly from the street level of the sidewalk to the finish grade of the High Line on a series of ramped concrete platforms lined with narrow beds of planting.

As one passes the far end of the Archive Building, the route opens slightly, affording a wider view. There are a few restaurants and housing developments lining the route with a few children’s playgrounds. ” ~ Cantor, Greenroofs.com