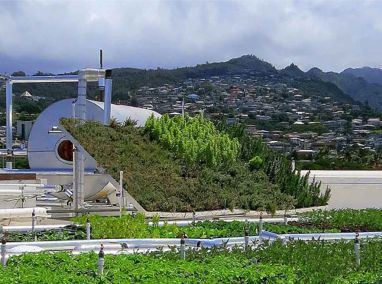 “Our partnership with Vitus Group at Banyan Street manor will provide 40 percent of the produce grown free of charge to building residence and the remaining produce will be sold to Whole Foods Market and other local grocery stores to offset our labor costs,” says Greg Lee, co-owner of 1st Look Exteriors. “This project is really about creating food sustainability and healthy living where residents in urban areas like Honolulu can have fresh produce, grown on top of and in the building they live.”

Another cooling feature of Banyan Street Manor is a white roof, and photovoltaic panels generate electricity to power the common areas and offset overall operating costs. It will also feature the largest living wall in the state (as of April, 2012). Located at the front and the rear of the building, the walls total 790 square feet and include tropical plants. The Green Living Walls will help reduce the building temperatures.

Vitus Group, an active local leader in the preservation and development of affordable housing, purchased the four story residential building from the Hawaii Public Housing Authority (HPHA) in May of 2011 for $8.5 million and has spent more than $3.1 million in improvements.

“This project is a perfect example of what is possible when private and public agencies work together to revitalize our communities,” said Makani Maeva, director of Vitus Group’s Hawaii’s office. “The result of this partnership is the preservation of affordable apartments in Oahu’s tight housing market.”

Current relation PNC Bank & Fannie Mae provided funding support in addition to the U.S. Department of Housing and Urban Development (HUD) which provides Banyan Street Manor with a 20-year Section 8, Housing Assistance Payment (HAP) contract. The HAP contract allows rents to be set at 30% of the residence available income. Banyan Street Manor is built on land leased from the City & County of Honolulu and will be affordable to tenants at or below 50% of the area median income for the next 61 years.

“Our focus is revitalization of existing affordable housing and through this investment we help to rebuild a sense of pride and community among our Banyan Street residents, many who have lived here for decades. We are also committed to providing high-quality features not traditionally found in comparable affordable housing projects,” added Maeva.