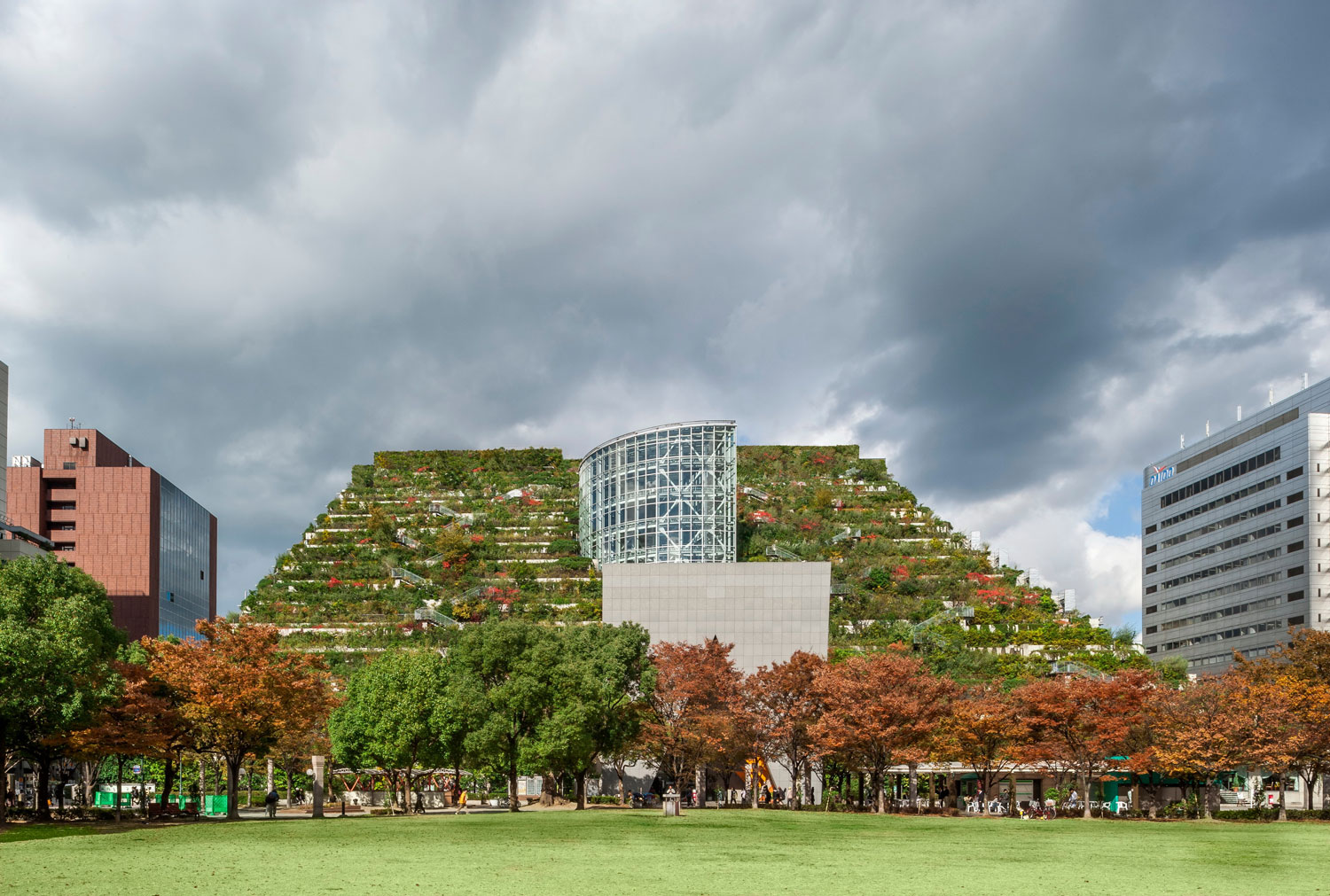 Situated in the middle of Fukuoka City, Japan, ACROS Fukuoka Prefectural International Hall is a center of international, cultural and information exchange and underneath lies over one million square feet of multipurpose space.

“The interior features a huge exhilarating atrium, as well as a number of attractive facilities including a full scale music hall the Fukuoka Symphony Hall, International Conference Hall which has simultaneous interpreter booths that can accommodate six languages, the Cultural Information Center providing useful information for tourists to Fukuoka, Kyushu, and Yamaguchi, and the Takumi Gallery which has permanent exhibitions of traditional Fukuoka arts and crafts. For centuries, Fukuoka has been a city open to the world at the crossroads of Asia. We believe that the large-scale facilities at ACROS will make it worthy of becoming a new center of exchange. The name ACROS is an acronym for “Asian Cross Roads Over the Sea,” ~ ACROS Fukuoka Foundation

Pioneering green architect Emilio Ambasz transposed a nearly 100,000-square-meter park in the city center onto 15 stepped terraces of the ACROS Fukuoka Prefectural International Hall. The design for ACROS Fukuoka proposes a powerful new solution for a common urban problem: reconciling a developer’s desire for profitable use of a site with the public’s need for open green space. The plan for Fukuoka fulfills both needs in one structure by creating an innovative agro-urban model.

The site, owned by the city, was the last large undeveloped plot in central Fukuoka. The city chose to develop the site in joint venture with private enterprise. In the scheme, a commercial developer would lease the land for sixty years and construct a building. A portion of the building’s space would be devoted to public and municipal operations; the remaining allowable space would be revenue-producing. In deriving a proposal, the competing developers sought to maximize income potential. On the other hand, the architect was concerned about the effect of the development on adjacent Tenjin Central Park—the only green open-space in that part of the city. To the maximum extent possible, the architect wanted to give back to Fukuoka’s citizens all the land the building would subtract from the city. Ambasz was awarded this commission for successfully achieving reconciliation between these two opposing desires: doubling the size of the park while providing the city of Fukuoka with a powerful symbolic structure at its center.

“Emphasizing continuity of the planting zone with Tenjin Central Park, and to represent the landscape from the park as an image of a mountain instead of the low vegetation which has a tendency to occur in the vicinity of buildings in city areas, a staircase-shaped rooftop garden was adopted. Regarding the building as a mountain, and with the beauties of nature as a theme, a space configuration and vegetation configuration was adopted which represents the changes of the four seasons.

“Its north face presents an elegant urban facade with a formal entrance appropriate to a building on the most prestigious street in Fukuoka’s financial district. The south side of the Hall extends an existing park through its series of terraced gardens that climb the full height of the building, culminating at a magnificent belvedere that offers a breath-taking view of the city’s harbor. Underneath the park’s fifteen one-story terraces lies over one million square feet of multipurpose space containing an exhibition hall, a museum, a 2000-seat proscenium theater, conference facilities, governmental and private offices, as well as several underground levels of parking and retail space. The structure is steel-framed reinforced concrete, the building has 14 floors above ground and 4 floors below ground, and the total floor space area is 97,252 m2.”

Along the edge of the park, the building steps up, floor-by-floor, in a stratification of low, landscaped terraces. Each terrace floor contains an array of gardens for meditation, relaxation, and escape from the congestion of the city, while the top terrace becomes a grand belvedere, providing an incomparable view of the bay of Fukuoka and the surrounding mountains. Growing media depths range between 12 and 24″. When first constructed, there were 76 varieties totaling 37,000 plants. Since then birds, etc., brought in seeds and now there are 120 varieties totaling 50,000 plants in the garden.

A stepped series of reflecting pools upon the terraces are connected by upwardly spraying jets of water, to create a ladder-like climbing waterfall to mask the ambient noise of the city beyond. These pools lie directly above the central glass atrium within the building, bringing diffused light to the interior through clerestory glazing separating the pools. Each year during the famous week-long Don Taku festival, the encircling balconies inside the atrium allow for a panoramic view as the procession passes through the building, while outside the stepped garden terraces become an inviting outdoor amphitheater for the entire city. A large “stone” like wedge at the foot of the terraced park pierces a V-shaped entrance into the building, revealing rough-hewn stone suggestive of geologic strata underlying the surface vegetation and likening the building to a massive block cut from the earth. This wedge shaped element also doubles as ventilation exhaust for the underground floors below and as a raised stage for performing artists.

The opposite side of the building faces onto the most important financial street of Fukuoka. Composed of striped glass, with every floor so angled as to reflect the passersby below, it softly de-materializes the mass of the building. The facade rakes outwardly from the vertical with each successively higher floor, creating the effect of an awning over the sidewalk. These overhanging eaves use the building design itself rather than an applied device to provide cover to pedestrians. The final stepped layers at the top create the effect of a large 45° cornice overhang at the street’s edge, defining the public entrance while enhancing the building’s urban presence.

“By imaging the building as a mountain, the spaces and planting are designed to evoke the traditional themes of natural beauty of the passing seasons in Japanese art (花鳥風月: literally Flower, Bird, Wind and Moon). They form an urban oasis providing solace and relaxation to all passing through. The greenery of the Step Garden has grown over time and even now thrive with almost no watering, pesticide or fertilizer use.” ~ Nihon Sekkei

In September 2000, the Takenaka Corporation, Kyushu University, and Nippon Institute of Technology jointly carried out a thermal environment measurement survey at ACROS Fukuoka, proving that rooftop gardens are effective in alleviating the urban heat island phenomenon.

“The thermal environment measurement survey was conducted on the step garden by collecting data from longwave and shortwave radiation meters, ultrasonic three-dimensional wind speed and temperature meters and scintillometers set up on the top, tenth, sixth and fifth levels.” ~ Heat Island Phenomenon Proven to Be Alleviated by Rooftop Greening, Takenaka Corporation, 2001 (link no longer active; provided for research)

The study found the following: a difference of 15°C between the surface temperatures of the concrete, coming to the obvious conclusion that the greenery and greening suppresses a rise in the surrounding air temperature (Velazquez, 2011).

Open to the public in 1995, ACROS Fukuoka emerges like a lush green mountain and its green stepped garden exterior has become a new landmark for the city. The Step Garden is open to the public, accessible from two entrances on the park side but it cannot be accessed from inside the building. The Rooftop Observation Deck is open from 10:00 to 16:00 on weekends and public holidays. Opening hours may vary according to the season; please check the website for other visiting specifics.

The design of the ACROS Fukuoka Prefectural International Hall has made the park and the building inseparable. The building gives back to the city the very land it would have taken away, and allows a major urban structure to exist symbiotically with the invaluable resource of open public space.