Which countries ranked highest and which fell behind?

The top ten most biodiverse countries are the following:

The 10 least biodiverse countries are the following:

Overcoming the problem with plants

The index was calculated based on six important factors that make up the score. While the study researchers gave the five animal-specific metrics equal weighting, plants were only given half-weight. Plants are essential, of course, and vital to a thriving and diverse ecosystem. However, the researchers conducting the study struggled to find consistent plant data as reported by the various countries or research teams working within those countries.

Some countries didn’t have plant data at all, or the available information was incredibly outdated. Mammals, amphibians, fish, and other living species have robust databases with comprehensive, country-specific catalogs available. Plants do not get the same level of resources. This means that many countries have thousands, if not tens of thousands, of undiscovered and unreported plant species hidden within their borders.

To account for this lack of streamlined data sourcing, the researchers for the Global Biodiversity Index created their own searchable database using the most academic and reliable sources available for each country. This in itself was quite an undertaking, as many sources have uncited or wildly inaccurate data. Especially as climate change looms and countries are coming to terms with the critical importance of biodiversity to keeping humanity alive, more resources and money will go towards the important work of environmental research and conservation. 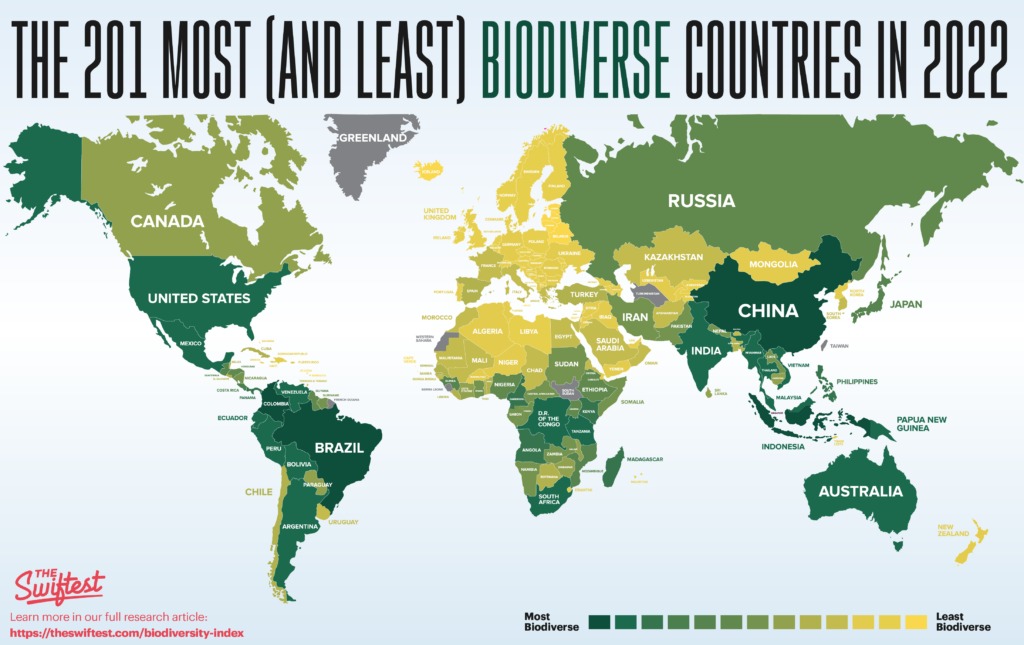 The most biodiverse countries in the world

Brazil is, by far, the most biodiverse country in the entire world. It has an incredible array of birds, amphibians, mammals, fish, and reptiles, not to mention an astronomical amount of plant species. Much of this biodiversity is thanks to its proximity to the equator, where plant and animal species are known to thrive. Brazil is also home to the Amazon rainforest, with over 2.1 million square miles of dense rainforest. Interestingly, much of the Amazon is fertilized by dust blown across the Atlantic Ocean from the Sahara Desert.

The world’s second most biodiverse country is Indonesia. Indonesia, spread out over 17,000 islands, is home to an incredible array of fish and bird species and over 19,000 plant species. Next are Colombia, China, and Mexico, which all boast unique and vibrant ecosystems and are considered Megadiverse Countries. 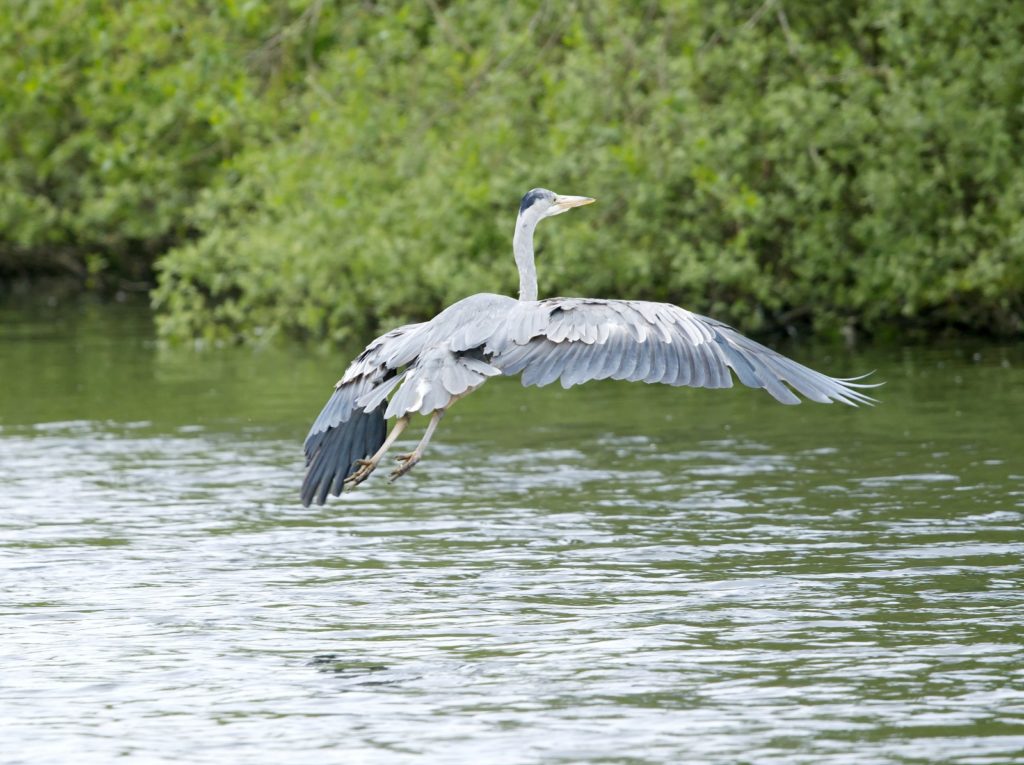 The least biodiverse countries in the world

The world’s least biodiverse country is San Marino. This tiny landlocked European nation boasts few recorded animal species and zero fish species. At only 61 square kilometers, it’s no surprise this dwarf nation lacks the diversity of other countries. Nauru, Tuvalu, and Sint Maarten (Dutch) are the subsequent least biodiverse countries. These nations are all relatively small and also islands, which will naturally limit their biodiversity potential. 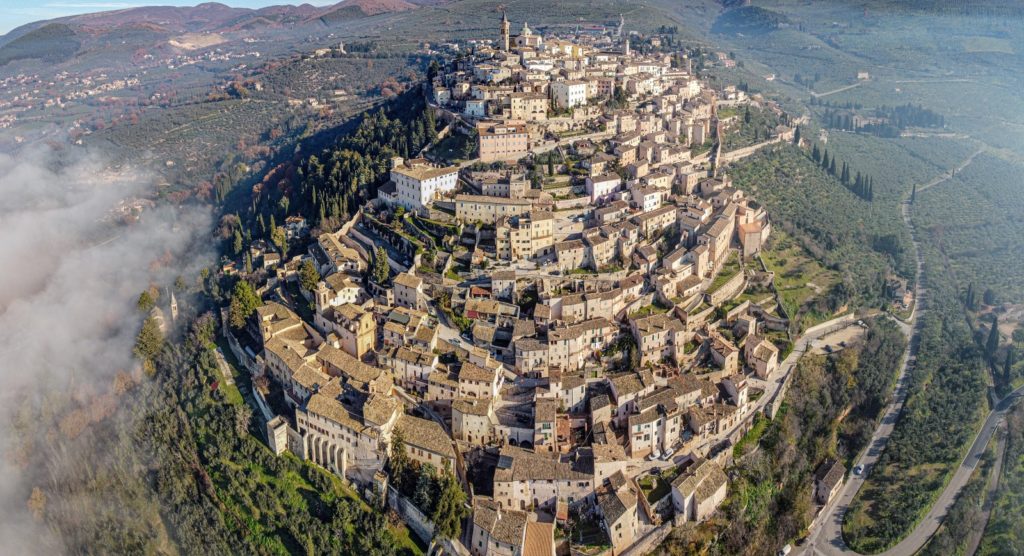 Ecological variety is more important now than ever. Not only do plants and animals work in harmony to keep the planet thriving, but they also keep humanity alive. Plant life filters the air we breathe and provides food and nutrition for every living person, not to mention the medicine and resources we all consume. The delicate system of pollination keeps our food supply actively growing. Thriving biodiversity helps us withstand major natural disasters, and the loss of diverse ecosystems will increase droughts and floods.

Biodiversity is also one of the key factors in slowing the climate crisis. A robust ecosystem helps mitigate the negative impacts of climate change and can help us adapt to a changing climate. Unfortunately, we face many global threats. Deforestation, pollution, habitat loss, and overexploitation are dangers facing the world’s biodiversity.

Climate change is expected to devastate further global biodiversity, which is tragic as a healthy ecosystem is one of our strongest lines of defense against climate change. With the global temperature expected to increase by at least 1.5 degrees Celsius by 2050, this will have a disastrous effect on plants, animals, and humans. This increase in temperature will cause sea levels to rise and oceans to become more acidic, putting further pressure on coastal and marine ecosystems.

Protecting global biodiversity is one of the best ways for countries to combat climate change. This would require a massive, drastic decrease in pollution, huge reforestation efforts, a massive ocean clean-up, significant investments in alternative energy sources, and more. The Paris Accord is a good step in the right direction. Still, scientists continue to ring the alarm bells regarding the deleterious effects of mankind on global biodiversity. We will likely lose an unprecedented number of species in the coming years. In fact, we already have. 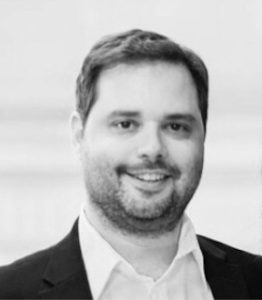 Matthew H. Nash is Co-Founder and Lead Researcher of San Francisco-based insurance and social research start-up “The Swiftest.” He is spearheading the research department focusing on social issues such as climate change, animal rights, biodiversity and other important topics for the 21st century.