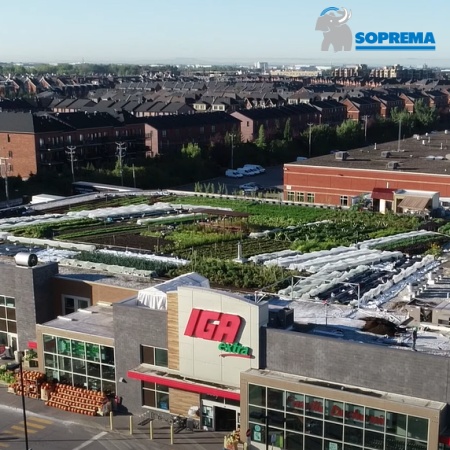 Drummondville, QC, Canada – (August 1, 2022) – When you see the IGA’s rooftop farm, it’s hard to imagine that it came very close to never happening at all. If it hadn’t been for the visionary output of La Ligne Verte’s cofounders Antoine Trottier and Patrice Godin, this project would have been a four-inch sedum mat extensive green roof. Not that this would have been a bad thing in itself, but we all agree that it would have been very far from the iconic grocery store rooftop farm it has now become in Saint-Laurent, on the Island of Montréal.

This neighbourhood’s regulations stipulate new roofs must be either green or reflective (white), and this specific project was required to have 50% of the building roof area covered with a green roof system. To meet this obligation, a simple extensive sedum roof was designed, and the bidding process went out as such. The project was awarded to La Ligne Verte, who was able to convince the IGA’s owner of the added value of investing in a large-scale urban rooftop farm. The roof was also redesigned to highlight the IGA logo, which is represented in the shape of the green roof.

When the Duchemin family partnered with La Ligne Verte, they didn’t think the project would have such a big impact. The rooftop farm gained a lot of attention in the media across North America and even further, being published in many countries throughout the world.

The project won the Green Roofs for Healthy Cities Award of Excellence, and involved many professionals, including SOPREMA, NEUF Architects, Groupe Mach and Sobeys.

The entire concept was brought forth and came together as a result of the involvement and persistence of La Ligne Verte, the local Montréal company that incorporated a very creative solution-based approach.

The waterproofing system was initially designed and installed as an inverted single-ply assembly, with the membrane protection needed for a green roof installation. As this project evolved into a rooftop farm, it had to sustain a lot of foot traffic and farming activities, so the inverted roofing assembly became even more crucial to protect underlying waterproofing. This assembly and the SOPRANATURE green roof system together, apart from protecting the waterproofing from any physical harm, add an extra layer of insulation, which reduces the store’s power consumption. The XPS insulation laid on top of the waterproofing system also adds a very strong physical barrier against shock from farming tools.

Read more:
This is an excerpt from a Soprema Case Study, “The Inside Details on the Award-Winning IGA Organic Rooftop Farm” published by Roxanne Miller.

SOPREMA is an international manufacturer specializing in the production of innovative products for waterproofing, insulation, soundproofing and vegetated solutions for the roofing, building envelope and civil engineering sectors. Founded in 1908 in Strasbourg, France, SOPREMA now operates in over 90 countries. For more than 100 years, SOPREMA has put its expertise and its sense of innovation at the service of builders. Every year, thousands of construction professionals from across United States, Canada and around the world choose SOPREMA for its complete product offering, its concern for quality, and above all, for its convivial service.

Visit SOPREMA in the Greenroofs.com Directory 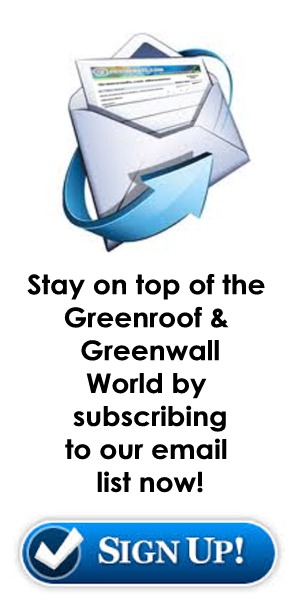