Heat domes, wildfires, droughts—Canadians have firsthand experience of the effects of climate change on our weather. And from British Columbia to the Atlantic provinces this also includes heavier and more frequent rains, which are flooding communities across the country.

Meanwhile, our cities and water-management infrastructure were designed for an era where powerful rainstorms were considered a once-in-a-century event.

When it rains, it pours

In the past, lawns, gardens, parks and meadows did some of the heavy lifting after a downpour, absorbing water into the ground. But as concrete jungles expand, excess water has nowhere to go. “All the rain gets deflected into the storm sewer system, which can only take so much water,” Schwenger says. 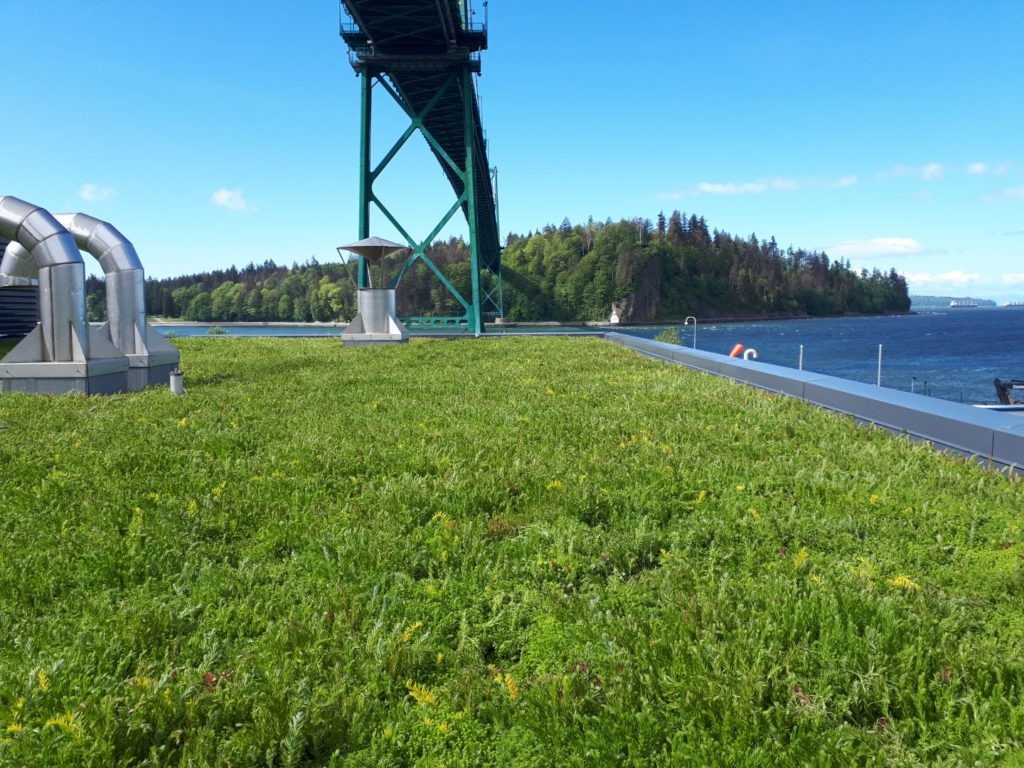 For Schwenger, stemming this rising tide means making building surfaces more absorptive. “The spongier a city is, the more capable it is of managing water during a heavy rain event,” he says.

“Planted materials can percolate and hold water just like miniature sponges,” Schwenger says. “When rains come down, green roofs and green spaces absorb water rather than deflecting it to the storm sewer system.” 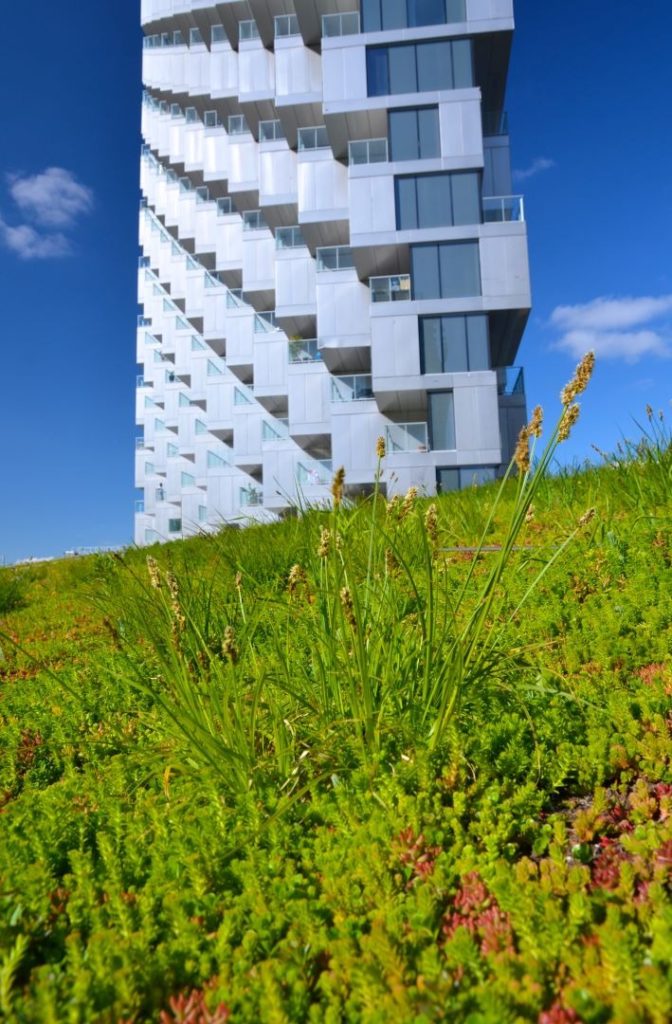 Although the idea of green roofs evokes pretty gardens and vegetation, the benefits of such living architecture run much deeper. “Ten to 15 years ago, cities were focused on shallow green roofs. But now we’re seeing an extensive push for high-capacity green roofs, or what we call blue green roofs,” Schwenger says.

Blue green roofs consist of a water catchment system up to 15 centimetres deep, with soil and plants on top. “It’s like a little shallow pond and through the use of wicking fabrics and devices, the water is passively irrigated up into the soil and to the plants,” he explains. While a shallow green roof might hold 10 to 20 litres of water per square metre, blue green roofs absorb as much as 90 litres per square metre.

The merits of green roofs go far beyond flood prevention. “With all the high rises, cities are becoming canyons of glass and concrete,” Schwenger says. “With fewer parks and natural spaces, there’s a significant increase in temperature and decrease in air quality. Greenery absorbs carbon dioxide and releases oxygen, and is mission critical for keeping cities cool and liveable.” Green roofs are also vital for pollinators, which in turn protect the food supply, he adds. 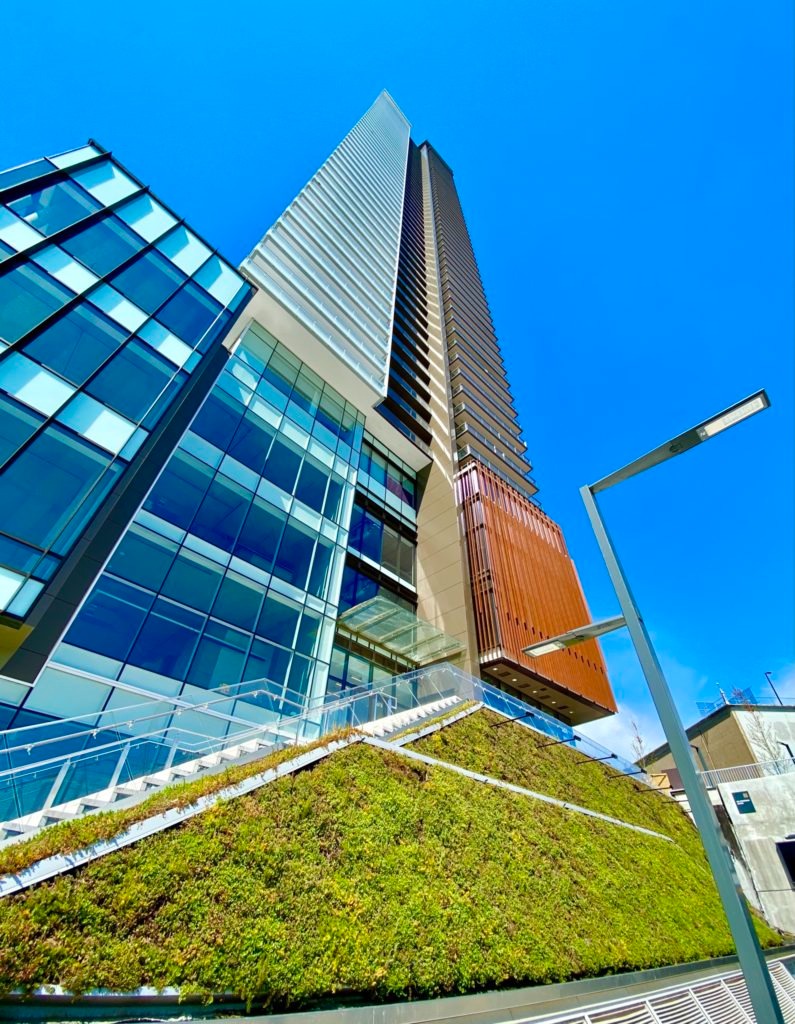 Schwenger looks to places like Amsterdam, where the entire green roof system is connected on a digital grid, to illustrate the full potential.

“The roofs have trapdoor valves that are controlled from a central location. If they’ve had a particularly rainy season and the rivers and canals are high, they hold all that water on the roofs. But if they have a drier period and the rivers are low, they can release that water.”

Schwenger says, “Here in Canada, we’re nowhere near that.” But with millions of dollars earmarked for urban green spaces in the most recent federal budget, and bylaws and strategies promoting green roofs in cities like Toronto and Vancouver, Schwenger says the potential is vast—so long as the approach is more than superficial.

“Just putting on a green roof isn’t enough,” he says. “We need standards for water retention and other metrics to make sure these roofs don’t just look green—they can actually help us fight climate change and its effects.”