Lela Nargi of Sierra | The national magazine of the Sierra Club writes:

More than 7,000 gardens were sprouting in schoolyards across the US as of 2015. For decades, these leafy spaces have been earning praise for their multifaceted benefits: offering kids hands-on experience growing fruits and vegetables, helping them develop a taste for healthy food, and providing teachers with a platform to explore STEM concepts. Representative Nydia Velázquez (D-NY) wants to move some school gardens up in the world—to rooftops—and plant them alongside meadows that also provide havens for wildlife, reduce stormwater runoff, and mitigate urban heat islands.

HR 1863, a.k.a. the Public School Green Rooftop Program Act, which Velázquez introduced in March, would authorize the Department of Energy to provide $500 million in grants to public schools to build and maintain green roof systems. That’s enough for about 14 million square feet of greenery—which, by some estimates, would retain some 154 million gallons of stormwater and 537 tons of carbon—with priority given to schools serving low-income students. Velázquez, backed by 20 (Democratic) co-signers and the support of the National Resources Defense Council and other environmental groups, says such roofs will help forge a path to “cleaner, healthier communit[ies],” according to a press release.

The science is on her side—although Pete Ellis, senior project manager for Recover Green Roofs, a Massachusetts-based company that’s installed green roofs on about 20 school and university buildings and is an industry sponsor of the bill, says that more work needs to be done to quantify things like carbon sequestration potential, biodiversity improvement, and just how much green roofs can reduce heating and cooling costs for any given building. Nevertheless, he says, “A lot of things have been rigorously substantiated: improved air quality, reduced ambient temperature to alleviate urban heat island effects, and the ability to capture and retain stormwater runoff.”

Ellis says green roofs are also a great way to “maximize the benefit of under-utilized spaces—nothing against [rooftop] solar panels, but if you’re looking for student engagement that checks all the [environmental] boxes, there’s no better way to go about it.” Added bonus: Certain kinds of green roof waterproofing membranes can have an average lifespan of around 40 years—in some instances, this amounts to a marked improvement over the 17 years a typical school’s rooftop membrane lasts before needing to be replaced.

You can search for example of green roof projects in schools here:

Read more: Could Green Roofs on Schools Be a Climate Solution? 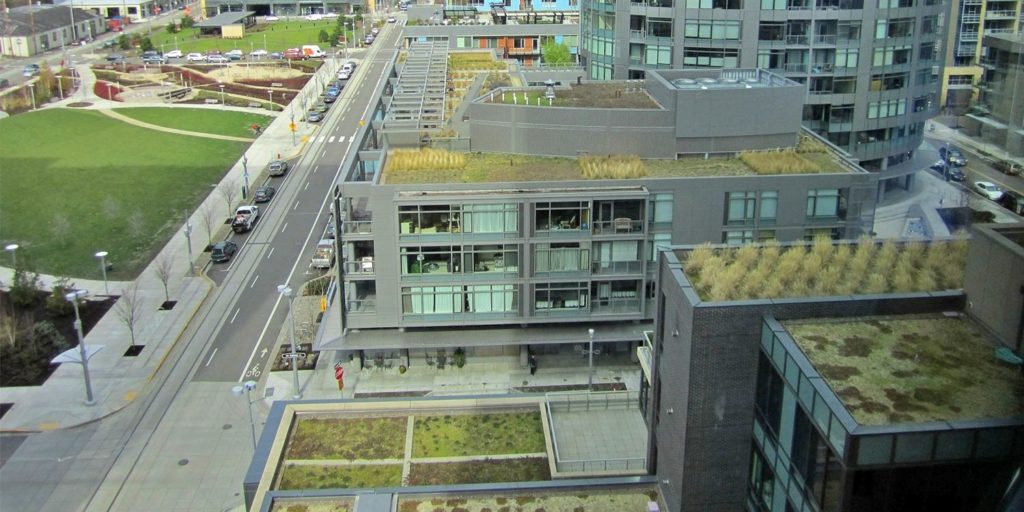