If you believe ecology is not limited to stormwater runoff and saving energy but that it also includes how we relate to each other and how imbalances are addressed, then you must watch “Social Healing with Greening” Panel – Part 1 with Patrick Carey, Peter Ensign, and George Irwin from our Greenroofs & Walls of the World Virtual Summit 2015 ~ Connecting the Planet with Living Architecture: People, Projects & Design above or on our VS2015 Virtual Summit 2015 playlist on our GreenroofsTV channel on YouTube. 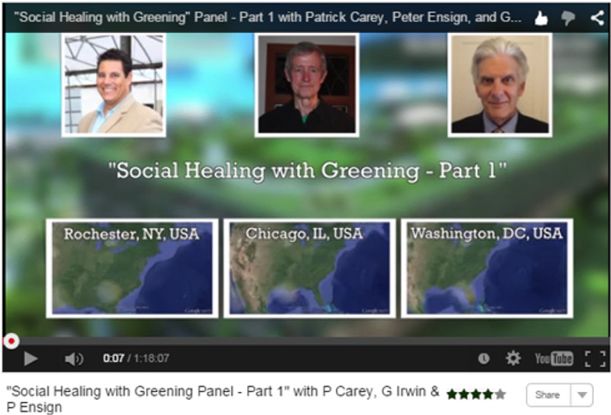 With our dear friend and associate Patrick Carey of Hadj Design, Peter Ensign of DC Greenworks, George Irwin of Green Living Technologies International, and Darius Jones from the Chicago Botanic Garden, we put together a fantastic panel on methods of dealing with some of the social inequities we face through various public and private programs.  But at the last minute Darius was unable to participate on filming day, so we created a second panel for Patrick to interview him on a subsequent time.

“Social Healing with Greening” Panel – Part 2 with Patrick Carey and Darius Jones will be highlighted next week! 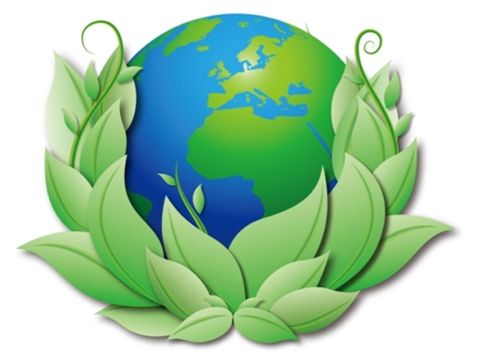 Patrick Carey is one of, if not THE most, knowledgeable persons I know where greenroofs are concerned – and a bit too humble about it!  It seems we’ve known Patrick forever – he was one of my earliest greenroof colleagues from 2000 or so.  He’s also been one of our earliest contributing editors, the Architecture Editor, and writes a very occasional architectural column entitled “A View from the Sky Trenches,” where he selects and discusses pertinent greenroof industry topics.

As an interviewer/moderator, Patrick is masterful and thoughtful! Don’t miss his excellent A Guide to Phytoremediation: A Symbiotic Relationship with Plants, Water & Living Architecture which he wrote to go along with the Greenroofs & Walls of the World Virtual Summit 2013’s “Environmental Healing through Phytoremediation – Chapter One” Panel Session with Patrick Carey (Moderator), Dr. Alan Darlington, Dr. Paul Mankiewicz, and Dr. Clayton Rugh and “Theory & Field Studies: An Interview with Dr. Ian Balcom from Lyndon State College of Vermont & Dr. Robert Cameron from Penn State – Phytoremediation Chapter 2” Panel Session with Patrick Carey (Moderator).

From 2011’s Virtual Summit you can watch the excellent Panel Session “Green Roofs Without the Hype” with Patrick Carey, Dr. Robert Berghage, Charlie Miller, and Ed Snodgrass where Patrick started his moderating skills with Greenroofs.com.

We’ve known Peter Ensign for a while, leading the now-closed DC Greenworks’ wonderful work in the Washington, D.C. community.  In fact, Haven Kiers and I have highlighted their programs and projects previously in our yearly Top 10 List of Hot Trends in Greenroof & Greenwall Design.  As DC Greenworks closed last summer 2015 having fulfilled their mission, Peter moved on several months ago and joined Riverbend Nursery to market the LiveRoof systems.

George Irwin is another esteemed colleague of ours, formerly our Green Wall Editor.  Known for his outspoken and sometimes controversial opinions, you can stay up to date with his happenings at his company, Green Living Technologies International (GLTi). George has also participated in previous Virtual Summits; see his collaborative video “Skyrise Ag: 5 Ways to Local Food Production” with Helen Cameron, Mohamed Hage, George Irwin, Ben Flanner and Alan Joaquin from 2013 and the “Vertical Agriculture: A Global Movement Starts Locally, from Wall to Table” with George Irwin, Tom Ferraro, and U.S. Congressman Tom Reed from 2011.

In this hour plus video, learn about the numerous benefits to the green economy when including greenroofs and greenwalls and with different training programs how people – at risk youth, underprivileged adults or transitioning adults – can turn their lives around and heal themselves and the environment.  Panelists will share their experiences and perspectives with years of experience in working with issues of human ecology like unemployment, poverty, and rehabilitation through projects that also heal the natural environment.

Chicago, IL, USA. Patrick Carey, GRP, has a degree in architecture and is principal of Hadj Design. Since 2000, Hadj Design has evolved from a design-build green roof and living wall to a research and design organization. Patrick has designed, installed, or consulted on over 100 green roofs to date. This work ranges from residential to commercial and institutional, various geometries and global climate regions, and with various performance characteristics such as storm water, food production, healing garden, habitat support, public art, and phytoremediation.

As such, he has been an activist in forming or aiding in the formation of grass roots green roof groups. His academic background is in philosophy, architecture, and botany/horticulture.  Patrick is a trainer with Green Roofs for Healthy Cities where he facilitates the Green Roof 101, 201, 301, & 401 Courses and has also taught at various universities.

Washington, DC, USA. This is Peter’s bio from early 2015: Peter Ensign, LEED AP BD+C, GRP,  has been the Executive Director of DC Greenworks in Washington, DC since 2010. Peter has overseen the installation of over 70 green roofs, 3500 rain-barrels, dozens of rain and native habitat gardens, and the only rooftop farm in DC. In 2014 Peter developed and delivered the first green roof maintenance training program, Growing Futures, in the District of Columbia. Upon completion all of the graduates were employed within 30 days. Peter has served as a speaker on stormwater issues and green job training through the U.S. Environmental Protection Agency, Green Roofs for Healthy Cities, and the Smithsonian Institution.

Peter envisions a future where rainwater is considered a valuable resource to be harvested and reused for the greater good, requiring a local skilled labor force to perform stewardship of our natural assets. Peter holds a multi-disciplinary degree in Architecture and Landscape Architecture from the University of Pennsylvania.

Rochester, NY, USA. George Irwin is founder and President of Green Living Technologies International, LLC (GLTi), a privately held company manufacturing patented Green Living Walls and Green Living Roofs, and is a global pioneer in vertical farming. Prior to founding GLTi, George was a landscape contractor for 20+ years. He holds a degree in education and maintains his passion for out-of-the-box learning. His efforts have earned him recognition as an education partner for the New York City Department of Education and additional higher education facilities, such as the State University of New York (and other international universities), with the development of a dedicated degree track in “Green Technology / STEM” education.

GLTi’s patented product applications of green walls and roofs include scalable vertical farms utilizing a compost-based growing media (GLTi bioSoil), allowing indoor farming operations 12 months a year to maximize production space including walls, roof, and the vertical floor plan. George is a former contributing editor on Greenroofs.com (2008-2015) where as the Green Wall Editor he shared his own experience as well as industry happenings within the field.”

Read about “Social Healing with Greening” Panel – Part 1 with Patrick Carey, Peter Ensign, and George Irwin video’s 5 Key Learning Objectives which I identified for participants of the Virtual Summit 2015. 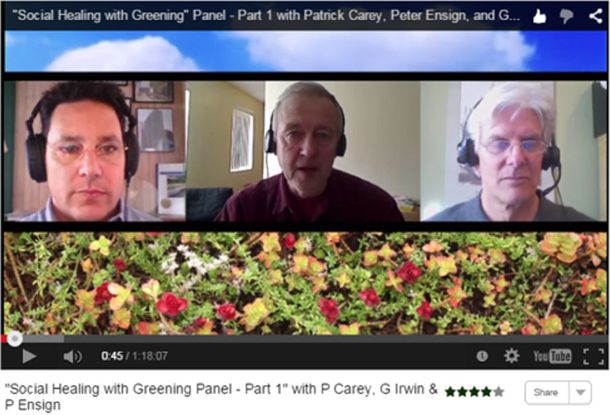